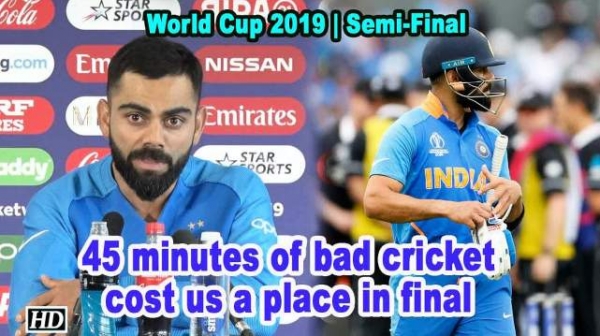 Manchester, July 10: Virat Kohli said India's shot selection in the ICC World Cup 2019 semifinal would have been better. New Zealand beat India by 18 runs to enter the final to be played at Lord's on July 14. They will face either defending champions Australia or hosts England for title.

"The first half, we were very, very good. We got what we needed at that point. We thought we had restricted New Zealand to a chaseable score but the way they come out with the ball was what made the difference. I think it was the skill level on display from NZ bowlers was there for all to see. Jadeja had a really good couple of games and his performances are a huge positive. New Zealand deserve it, they put us under more pressure. At times, I think our shot-selection could have been better," said Kohli after the match.

"Really proud of the way we competed throughout the tournament. As I said, come the knockouts, New Zealand were braver than us and deserve to win. Thanks to all the fans, thanks for coming out in huge numbers," Kohli signed off.

New Zealand captain Kane Williamson was happy that they crossed the line in the end. "It's a different feeling. The surfaces and the way we had to skin it, has been different to the last World Cup we experienced. A tough game, tough semifinal and really pleased to be on the right side of things. It was really tough. We had to assess conditions quickly and I think both sides felt that it wasn't a high-scoring track. We thought that 240-250 will help us to put India under pressure.

"The guys were able to do that in the middle and at the back end without going too hard. Lot of it was on the conditions, with the rain around yesterday and whether it changed the conditions. With the new ball, our bowlers try to move the ball off the seam or in the air. Need to put pressure on that world class batting line-up of India. We knew that when the track slowed down, we had to squeeze. They showed why they are a world class side when they took it really deep to a position where they could have won it through MS and Jadeja.

"Our character was tested and we come out on top. We've seen conditions be really tricky at times and in some games, we didn't play our best cricket but guys weren't disheartened and backed ourselves. On a particular day, anything can happen and it was a game of small margins. Pleased to come across the line. Indian supporters have been really good," said Williamson.