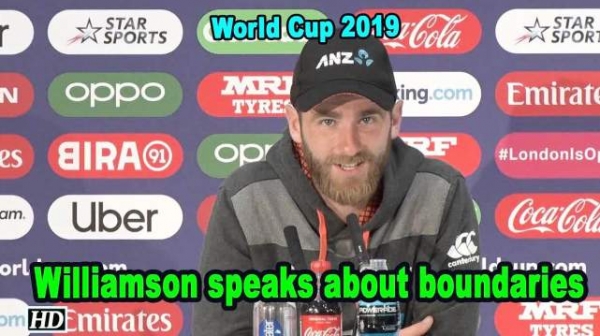 London, July 15: As he left after attending perhaps the most difficult press conference of his life, Kane Williamson must have been taken aback at the unusual show of appreciation from the normally impassive, oftentimes cynical, media corps. The sustained applause ringing in his ears as he exited the room must, however, have come as scant consolation for New Zealand’s captain, also the Player of the Tournament at the 2019 World Cup.

After all, his team had been beaten for the second successive edition in the final of the

tournament, and by the narrowest, most imaginable of margins.

Actually, strike that. New Zealand were not beaten. England might have won the World Cup at an emotion-soaked Lord’s on a dramatic Sunday (July 14), but they certainly did not win the final. England and New Zealand played out two ties in the title clash, first in regulation play, then in the Super Over that was introduced in the 50-over flagship event for the first time.

The tie-breaker applied was the combined boundaries scored by the teams in normal play and the Super Over. England comfortably shaded New Zealand on that count, 26-17. It was unexpected and unprecedented; never had a World Cup been decided thus, never in 11 previous editions had a final even been as keenly contested.

The rub of the green went entirely England’s way – from a strong leg before shout against Jason Roy overruled off the first ball of the match, to a deflected overthrow that went for four off Ben Stokes’ outstretched bat in the final over of normal time. Weaker men would have cracked. They would have griped at the unfairness of it all. They would have at least registered their protest, if not moaned and whined. Williamson is made of sterner stuff. He might have been 'gutted’, as he put it, but he took the events of Sunday on his chin.

He tried unsuccessfully to mask his pain with a smile, he joked a little, but you could see how much he was hurting. New Zealand had given it their all, they had walked toe-to-toe with England for a majority of the final, and yet they had nothing to show for their efforts. Nothing tangible, in any case.

Apart from the runners-up tag, however, New Zealand walked away with the respect and admiration of the cricketing world. Their misfortune on various different occasions might have done little to dispel the theory that nice guys don’t finish first, but it’s hard to run into professional teams as likeable as the Black Caps. Gentlemen-captain-cricketers of the Williamson mould are even rarer to find.

Just as the press conference was winding down, Williamson was asked if he would love for all cricketers to be as gentlemanly as he is. After the briefest of pauses as he considered the import of his reply, he came back with, “Everybody is allowed to be themselves. That is a good thing about the world. And everybody should be a little bit different as well. (It’s a) really difficult question to answer. That is probably my best answer, just be yourself and try and enjoy what you do.”

It was inevitable, given that he chuckled repeatedly at queries to which he might have had different answers on a more private platform, Williamson was asked if he felt laughing was the best way to go under the circumstances. “Laugh or cry, it's your choice, isn't it?” he replied, sagely. “It's not anger. There's a lot of disappointment. The guys are really feeling it and I think it's probably more down to some of the uncontrollables that go on when they have put in such a huge amount of effort. We know in this game, it can be fickle in its nature and there are parts that, as hard as you try, sometimes those cards don't fall your way and today it ebbed and flowed.”

The Player of the Tournament award didn’t count for much in Williamson’s book in the immediacy of the unfolding of the events. “An individual performance is only a contribution to something greater than yourself, and that is the team,” he philosophised. “The idea is that you are helping your team get across the line, and the only thing you can perhaps think of at this point in time is what more I could have done when the margin is so small.”

This Kane is very, very able. And he deserves every encomium that is bound to come his way in the next several years. They don’t make them like Kane Williamson anymore. No sir, they really don’t.