New Delhi, July 11: Indian captain Virat Kohli-led his team to express their anguish as they were defeated by New Zealand in the semi-final of the ICC Cricket World Cup 2019 in Manchester on Wednesday (July 10).

New Zealand stunned the much-fancied Indian side in the high-stakes encounter as their pacers wrecked havoc by demolishing the latter's top-order in a tricky run chase. 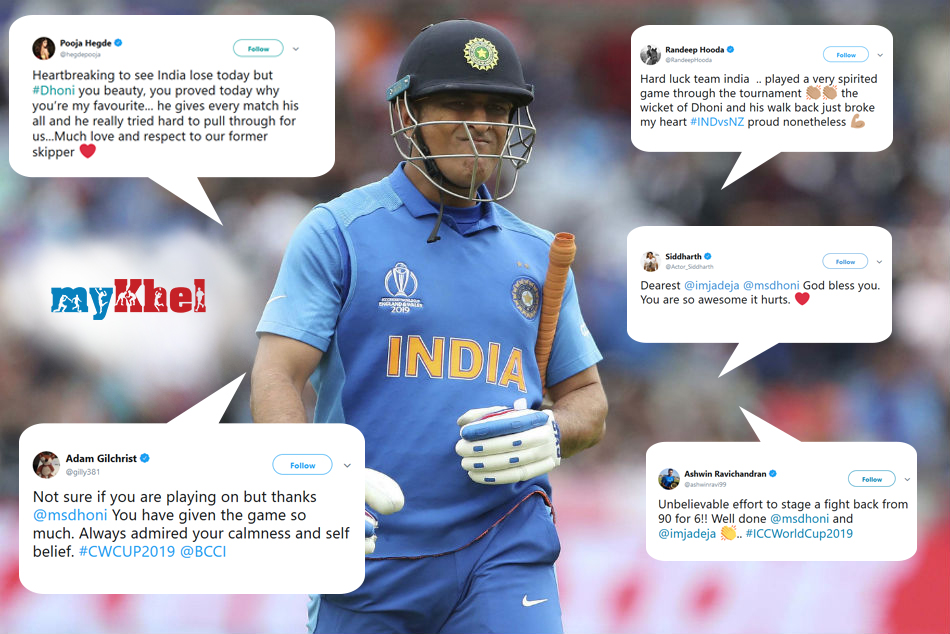 Veteran MS Dhoni and Ravindra Jadeja showed some fight in the end and kept their team in the hunt but their efforts failed to take India across the finishing line.

With that defeat, India's campaign in the World Cup came to an end and the star-studded side were shocked by a disciplined New Zealand bowling attack.

It was the second consecutive instance when India's juggernaut in the World Cup came to an end in the semi-final. Anguished with the pain of not making it to finals India cricketers took to their respective Twitter handles to to express their disappointment.

"Firstly I want to thank all our fans who came in huge numbers to support the team. You made it a memorable tournament for all of us & we definitely felt the love showered upon the team. We are all disappointed & share the same emotions as you. We gave everything we had. Jai hind," wrote Kohli on his Twitter handle.

"Heartbreaking that our dreams have come to an end. As a team and as a nation we've stood strong together through the last 6 weeks. Big thank you and lots of love to everyone," wrote KL Rahul on his Twitter handle.

Jasprit Bumrah wrote on his Twitter handle, "A big thank you to all my team members, our coaches, support staff, our families and most importantly to all the undying support from all of you! We gave it everything we had!"

"Heartbreaking that our dreams have come to an end. As a team and as a nation we've stood strong together through the last 6 weeks. Big thank you and lots of love to everyone," wrote KL Rahul on his Twitter handle.

Young Rishabh Pant also took to his Twitter handle to express his disappointment after WC exit and wrote, "My country, My Team... My honour 🇮🇳 Could not be more grateful for the opportunity and even more for the belief and love the entire nation has shown us as a team 🙏🏻❤ We will be back stronger 🙌🏻#JaiHind #Strongertogether."

All-rounder Hardik Pandya thanked the fans for making the WC a memorable outing for them and wrote, "Memories.. memories to last a lifetime. My first World Cup didn't have the ending we wanted but it's given me so many emotions and lessons that I'll always keep with me. Thank you to everyone part of this special team including you the fans, we're nothing without you."

Karnataka batsman Mayank Agarwal - who was called in as a replacement to injured Vijay Shankar but couldn't make his ODI debut - wrote on his Twitter handle, "So proud of the way we played throughout the tournament! It felt incredible to be a part of Team India during the World Cup 🇮🇳 We will only grow stronger and better from here 💪🏻

A big thank you to everyone for your support & wishes. #INDvsNZ #CWC19 #TeamIndia."

Wrist-spinner Yuzvendra Chahal wrote on his Twitter handle, We had one goal, to win the world cup but we fell short. Can't describe the emotions, but a very big thank you to the fans who were and always are behind us. Jai hind 🇮🇳."

All-rounder Ravindra Jadeja, who was the star of the Indian innings for his imperious batting effort in the run chase, took to his Twitter handle and flayed his critics.