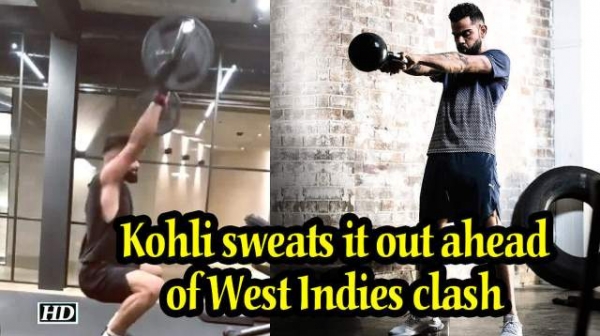 New Delhi, June 25: Team India couldn't practice outdoor in their practice session at Old Trafford in Manchester due to rain on Tuesday (June 25). So the players headed indoors for practice and get themselves going ahead of their match against West Indies on Saturday (June 27).

The BCCI shared some images of Indian cricketers practicing indoors after the scheduled session at Old Trafford was washed out.

India captain Virat Kohli was one of the four Indian players who practiced indoors under the watchful eye of coach Ravi Shastri. All-rounder Vijay Shankar could also be seen discussing with coach Shastri.

Rain couldn't prevent Kohli from preparing himself for the game.

Bhuvneshwar back in the nets

Team India fans had a pleasant surprise to watch pacer Bhuvneshwar Kumar returning to the nets. The right-arm pacer, who missed out the match against Afghanistan, after pulling up his hamstring during the match against Pakistan.

BCCI also tweeted the image of Old Trafford ground which looked damp and the pitch covered.

Meanwhile, India's current head coach Ravi Shastri, who was part of 1983 World Cup winning team under Kapil Dev's captaincy, shared some of his memories of the iconic final against West Indies.

Shastri revealed India played their first WC match against West Indies at the same venue and they defeated two-time champions in their opening game and that win game the Indian team the belief.

Team India are coming back from a hard-fought win against minnows Afghanistan by 11 runs. Defending a total of 224, Mohammed Shami grabbed a four-for, including a hat-trick. Yuzvendra Chahal and Jasprit Bumrah picked up two wickets each in the game.

The Men In Blue face a confident West Indies side, who lost their previous game against New Zealand by a whisker. Carlos Brathwaite slammed his career's maiden ODI ton and almost single-handedly taken his team home. The Windies would be looking to come back strongly against Indians.