Melbourne, Jan 18: MS Dhoni anchored India to their maiden bilateral ODI series triumph in Australia for a perfect finish to a historic trip Down Under here Friday (January 18).

Virat Kohli's men became the first country to return from Australia without losing a single series having won the Test series 2-1 and drawn the T20 Internationals 1-1.

From a dasher, to a finisher to finally the anchor in the last leg of his career, Dhoni 3.0 was in full flow during India's successful chase of 231 on a sluggish Melbourne pitch after Yuzvendra Chahal set it up with a career-best 6 for 42. 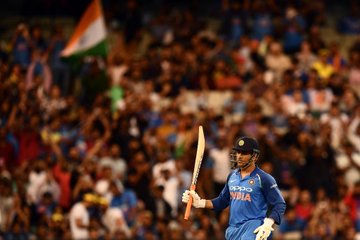 Dhoni's unbeaten 87 off 114 balls was a testimony to his high-quality match awareness as the street-smart Kedar Jadhav (61 no, 57 balls) donned the role of a finisher.

The former India skipper's role going into the business end of his illustrious career is that of an anchor, who takes the game deep.

He performed his role to perfection with the world-class exhibition of running between the wickets in what could well be his last match on the Australian soil.

Not to forget the 'Man of the Series' award for a hat-trick of half-centuries and two coming in winning causes.

While Dhoni was lucky to be dropped on 0 and 74 but Australian bowling never had the sting to unsettle the Indian batsmen despite skipper Virat Kohli (46) being dismissed with more than 100 runs left.

Chasing 231, India got off to a slow start as well. Australia created some good pressure with the new ball, in particular, Jhye Richardson (1-41) who tied down Rohit Sharma (9). But Dhoni, skipper Kohli, and Kedar Jadhav soaked the pressure well to deny the hosts any luck.

Cricketers and experts hailed Virat Kohli and his boys for standing tall Down Under.

Here's who said what on India's win:

Solid team effort to win the ODI series as well and finish a tour filled with excellent cricket.
Happy to see @JadhavKedar stand up and deliver when given the opportunity and support @msdhoni, who once again played the role of the anchor beautifully! #INDvAUS pic.twitter.com/okwQPXFwsr

Wonderful calm, composed innings from Dhoni and Kedar Jadhav playing a very important hand. So India do the double, win the test and the one-day series as well. This has been a very fruitful Australia tour for Team India .

Super successful test series and India addressing all the concerns in the ODI side in style. Chahal and Kedar granbing their chances in style, Bhuvi back at his best, Shami impressive and most importantly Dhoni answering with the bat in style

Another day, another final of sorts and @msdhoni hunts down another chase like he was born for that purpose. Unbelievable composure and resolve #INDvAUS #MSDhoni

Another series win for team 🇮🇳 congratulations. 🇦🇺 with lots of work to do in all three formats 🏏

If reliable had to be described, it would've #Dhoni written all over it. Congratulations, #TeamIndia. What a special win!! @msdhoni @BCCI #INDvsAUS

That’s what you call ‘Timing a chase’ !! @msdhoni is one cool cucumber ... Great tension at the #MCG ... India are a fantastic cricket team ... #AUSvIND @FoxCricket

Underneath that emotionless expression, MSD is having the last laugh #Dhoni

Now that is the performance of a champion. MS Dhoni is man of the series. Brilliant.

Hat tip to grandmaster @msdhoni. With so many writing him off, has scripted his own return to form and value to the team in quite remarkable fashion

He just smiled at all of them & let his willow do the talking #Dhoni #MSDhoni pic.twitter.com/BqnA3FZGIK