Nottingham, Aug 4: After the pacers displayed their class and dominated hosts England, the opening duo of Rohit Sharma and KL Rahul showed great resolve to take India to 21 for no loss in 13 at stumps on day one of the first Test here on Wednesday (August 4).

Rohit (9 not out) and Rahul (9 not out) remained unbeaten at the close of play and denied England pacers James Anderson, Stuart Broad, Ollie Robinson and Sam Curran their wickets.

After the first two sessions ended in a draw, the visitors claimed the final session as they dominated it first with the ball and then with the bat. Indian bowlers picked up six wickets for 47 runs in the final session. England suffered a collapse in the first innings as they lost their last seven wickets for just 47 runs to be restricted to 183 in 65.4 overs on day one of the opening Test.

Jasprit Bumrah and Mohammed Shami triggered English batting collapse with a disciplined bowling effort as the Indian side bowled out their opponents to the third-lowest total on the first day of an overseas tour.

The four-man Indian pace attack bowled showed great skill and control with duke ball and dominated the day's play after the hosts elected to bat. Bumrah emerged as the pick of the bowlers for India with his figures of 46 for 4 from 20.4 overs. While his opening partner Shami returned with 28 for 3 from his 17 overs.

Advantage India @BCCI after a bowlers' day at @TrentBridge with @imVkohli wearing the biggest smile over Joe Root. Day 2 we need the rain to stay away! #ENGvIND #TestCricket

Shardul Thakur picked up a couple of wickets when he dismissed England captain Joe Root (64) and Ollie Robinson (0) in an over and prevented the hosts from scoring a big total. 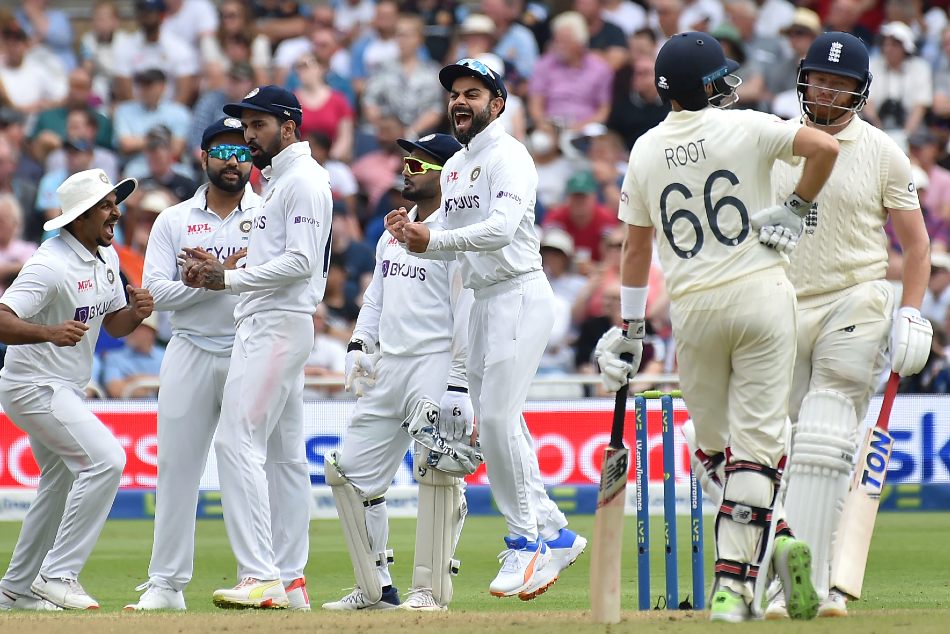 Mohammed Siraj was the most expensive Indian bowler with figures of 48 for 1 from his 12 overs. The young right-arm quick - who was included in the side as Ishant Sharma's replacement - dismissed set Zak Crawley as the tourists picked up two wickets in the morning session.

Shami and Bumrah were the wreakers-in-chief for India as they never let the English batters breathe easily. The duo bowled exceedingly well with the new ball and pestered the inexperienced and out-of-form English batting line-up.

England had a disastrous start with the bat when opener Rory Burns was dismissed for a duck in the first over of the day's play. The left-handed batsman was trapped leg before by Bumrah on the fourth ball of the match.

Later, Crawley and Dominic Sibley tried to revive the English side and forged a partnership of 42 runs for the second wicket. Crawley's defiance ended for 27 when he was dismissed caught by Siraj but the credit for the same goes to wicketkeeper Rishabh Pant, who was convinced that there was a faint edge from the bat before the ball landed in his gloves.

England lost the wicket of Sibley soon after the lunch break when Shami dismissed the opener for 18. Later, captain Root and his fellow Yorkshire partner looked to revive English innings and forged a partnership of 72 runs for the fourth wicket. Root scored 64 and ended up as the highest run-scorer for his side in the first innings. While Bairstow added 29 before getting dismissed by Shami.

The mighty Bumrah is back. That WTC final was one of those games all good players experience. This was Bumrah enjoying his bowling and making batting look difficult

At the time of Bairstow's dismissal, the scorecard read 138, and as if his dismissal opened the floodgates for the hosts the entire English side collapsed for 183. Sam Curran scored 27 not out as the lower half of England's batting fell apart. Dan Lawrence (0), Jos Buttler (0), Ollie Robinson (0), Stuart Broad (4) and Jimmy Anderson (1) couldn't offer any support to captain Root and Curran as the hosts were restricted to their lowest ever total at home.

The afternoon session was the best for England batsmen as they scored 77 runs in 25.2 overs for the loss of two wickets, after scoring 61 in the first session. The pitch had enough for the pacers in the first hour of play with the ball swinging and seaming around. With India going in with four pacers, Shardul Thakur came into the side but the one spinner picked was Ravindra Jadeja, who didn't bowl in the first session.

Dropping premier spinner R Ashwin was a big call as he had been well prepared for the series opener with his preparation including a county game.

It was England's second-lowest total at home in the match's first innings against a subcontinent team after winning the toss and batting first. The lowest is their 136 against Imran Khan-led Pakistan at Leeds in 1987. Pakistan went on to win that Test by an innings.