London, Aug 16: Having dominated the morning session with their gritty partnership Mohammed Shami and Jasprit Bumrah starred with the ball as well when the duo struck with the new ball to dismiss England openers for a duck in the run chase of 272 on the fifth day of the second Test here at Lord's.

Later, senior pacer Ishant Sharma gave England back-to-back blows as he trapped Haseeb Hameed and Jonny Bairstow at the stroke of tea break and brought India to the driver's seat in the contest.

Ishant was the last bowler captain Virat Kohli introduced in the attack and gave quick blows to the hosts in his fiery spell. The tall speedster on the final ball of the afternoon session when he dismissed Jonny Bairstow LBW for 2 and ended his resistance. Umpire ruled the batsman not out but captain Virat Kohli took the DRS to perfection and ended the session on a high. 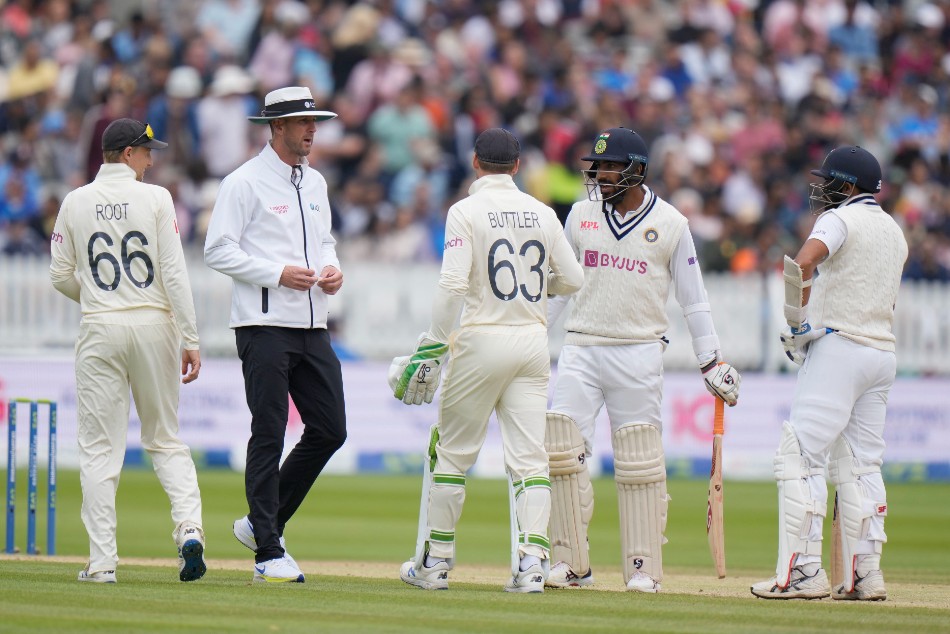 While England captain Joe Root continued to offer resistance and remain unbeaten at 33. At the tea break, England were 67/4 in 22 overs face an uphill task of saving the game.

Bumrah started bowling for India in the final innings and dismissed Rory Burns for a duck in the first over while Shami dismissed Dom Sibley for a duck in the next over and left England gasping for breath before India declared innings at 298/8 and set a target of 271 for the hosts to chase.

Earlier in the morning session, Shami and Bumrah created a record as they stitched the highest ninth-wicket partnership for India in England and helped their team post 286/8 in 108 overs in the second innings, and took a lead of 259 runs on day five.

Shami stole the show with his bat as the right-handed batsman slammed a half-century in the second innings and bludgeoned the England bowlers. It was Shami's clean hitting that not only dashed the hopes of Joe Root-led side of restricting India to a low total and extract a win.

The entire Indian side came downstairs at the Lord's and gave a warm reception to the bowlers who put up a great fightback as Team India lost its biggest hope - Rishabh Pant - very early in the morning session on the final day. However, the tailenders Ishant Sharma (16), Bumrah (30*), and Shami (52*) steered the team to a respectable total.

India scored 105 runs from 22 runs in the morning session and lost the wickets of Pant (22) and Ishant.