Birmingham, July 4: After the Indian pacers bowled out hosts England for 284, Cheteshwar Pujara and Rishabh Pant have put India in command, with the visitors extending their lead to 257 at the end of day 3 of the rescheduled fifth and final Test against England in Birmingham.

Pujara struck a patient half-century as he stitched together an unbeaten fourth-wicket stand with first innings centurion Rishabh Pant to put the visitors in command at Edgbaston on Sunday. The duo were unbeaten at the end of day's play with a partnership of 50 off 91. 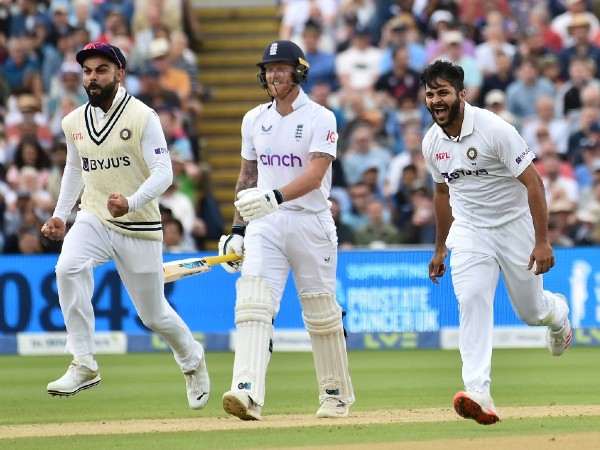 Speaking during the end of day's press conference, Siraj said, "(Pujara) He is a warrior. In Australia, he did it and here also - he is doing the job. Whenever the team needs it, he always stands up. When tough situations arise, he's always there to do the job. Exactly, bowling to him is difficult, he does not attack much and just keeps on leaving balls so that can get irritating in the nets."

For England, Jonny Bairstow was the highlight of England's innings as he struck a solid century, before Mohammed Shami handed India the breakthrough removing Bairstow for 106 off 140. Following Bairstow's wicket, which frustrated the Indian bowlers, England saw a collapse as they were bowled out for 284 to hand India a 132-run lead.

Talking about Bairstow's knock, Siraj said, "As bowlers, we had to just keep patience. Bairstow is in form and he has been continuously playing attacking batting since the New Zealand series. So, we were aware his confidence was high. Our simple plan was to stick to our basics and, no matter what he did for us, it was a matter of one ball, be it an inswinger or seaming in off the pitch.

"When we saw the New Zealand series, we realised that our every bowler is 140-plus and they (NZ) didn't have that. We had that ability and we had also played against England last year. So that was our plus point, as we were aware of their weak points and that is why we got the success," said Siraj.

Meanwhile, when asked about stand-in skipper Jasprit Bumrah, who took over the reigns from Rohit Sharma after he tested covid positive, Siraj said Bumrah has been the same as captain as he was as a player. In England's first innings, Bumrah picked up three wickets. Talking about Bumrah the captain, Siraj said, "As a player and as a captain, he has been the same. He is always supportive and is always there to help me out. Whenever I do wrong, he tries to make me understand what to bowl in certain situations."

Before signing off, Siraj opened up on the pitch conditions. "In the first innings, the pitch was helpful to begin with, but after that it became flatter. So our only plan was to bowl in one area consistenly. Also, the more effort balls we could deliver, then it would be effective for the bowlers. If we took it easy, then we would end up leaking runs. The ball is now keeping low, so in the second innings it will definitely help us," signed off Siraj, who led India's attack with a four-wicket haul.

As the visitors head into the penultimate day, the Bumrah-led side hold a strong 257-run lead with seven-wickets in hand. India, who lead the series 2-1, are on the brink of a historic series win in England, as only a draw would seal India's series win.