India skipper Hardik Pandya put up an all round show against Ireland as India clinched a comfortable seven-wicket win in Malahide on Sunday. Pandya led from the front as he won his first game as India captain. 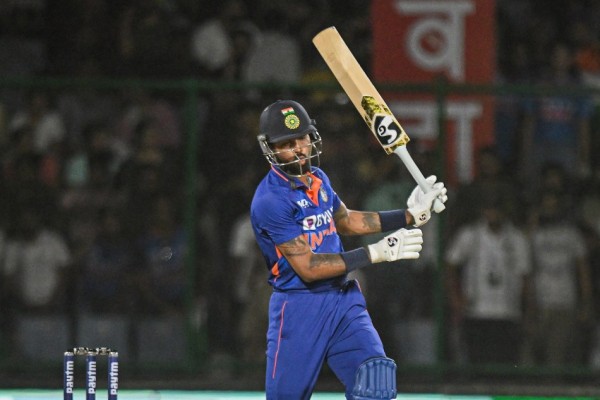 In a rain-curtailed match, Pandya first contributed with the ball, and then went on to stitch together a match-winning partnership with opener Deepak Hooda (47 n.o off 29) to guide India to a comfortable win in the first match of the two game series.

Leading the side for the first time, Pandya won the toss and elected to bowl first. India got off to a strong start as they reduced the hosts to 22/3 in 3.5 overs. But a sizzling half-century from Harry Tector saw Ireland post a modest total of 108/4 in 12 overs.

In reply, Ishan Kishan handed India a strong start in the chase to keep them on course. Kishan, who opened the innings with Deepak Hooda, played a crucial knock off 26 off 11, before Craig Young handed Ireland the first breakthrough.

Back-to-back wickets from Young saw Suryakumar Yadav fall for a duck as India was reduced to 30/2 in 2.5 overs. In the powerplay India scored 45 for two.

After Young's double strike, skipper Pandya (24 off 12) and Hooda hammered the Ireland bowlers around the park as they made a mockery of the Irish total. Pandya and Hooda stitched together a match-winning stand of 64 off 32 stand for the third-wicket partnership to guide India home.

Hooda opening the batting for the first time for India in T20Is, played an unbeaten knock to guide India home.