Team India put up a clinical performance at Shaheed Veer Narayan Singh International Stadium in Raipur and registered a comprehensive 8-wicket win in the second ODI.

With this win, the Men in Blue took an unassailable 2-nil win over New Zealand and secured their seventh straight ODI series triumph at home. 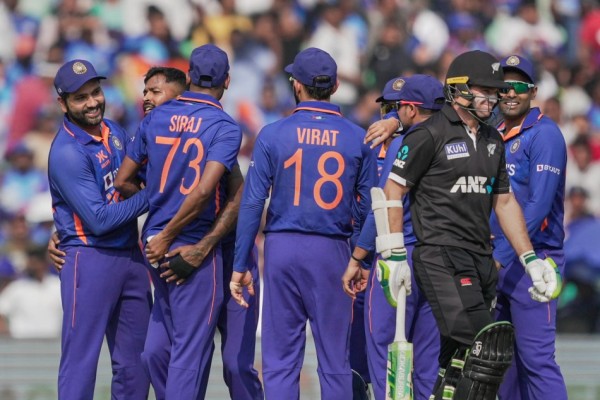 Chasing a paltry 108-run target was never going to be a problem for the Indians and the fans at the packed stadium in Raipur witnessed a dominant performance from their favourite stars.

However, the win could have been sweeter had the openers Rohit Sharma and Shubman Gill remained unbeaten in the run chase. To the fans' disappointment, Rohit (51) and Virat Kohli (11) were dismissed.

Earlier in the day, the Indian bowlers justified their captain's decision to bowl first by bundling the Blackcaps to 107 in 34.3 overs.

Mohammed Shami (3/18), Hardik Pandya (2/16) and Washington Sundar (2/7) were the pick of the bowlers for the hosts. Mohammed Siraj, Shardul Thakur and Kuldeep Yadav picked up a wicket each.

Raipur became the 50th venue to host an ODI game and it started by establishing itself as a heavy hunting ground for Men in Blue.

With the series in the pocket, captain Rohit Sharma might consider doing some experiments in the 3rd ODI in Indore on January 24.&nbsp;