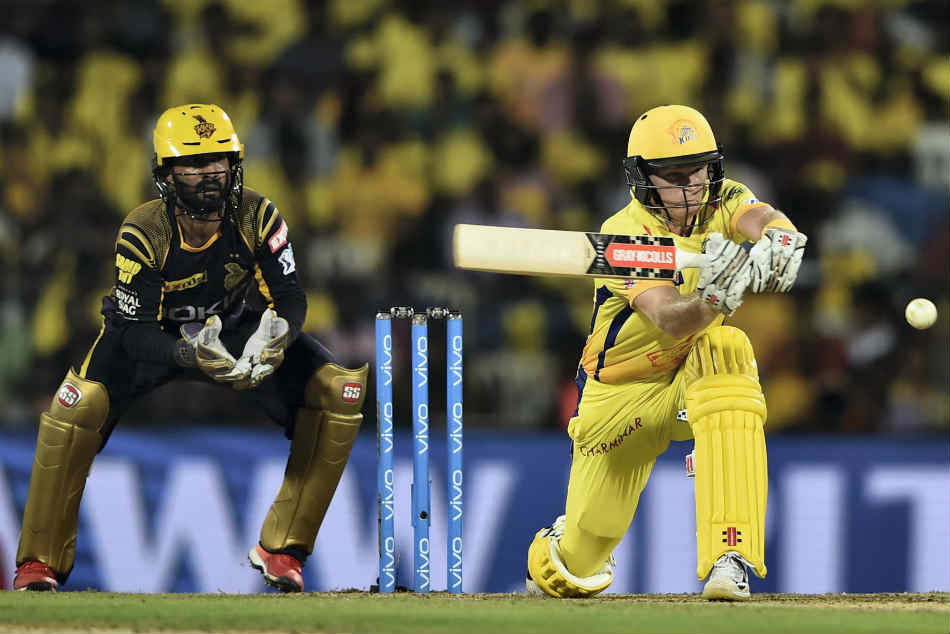 Chasing a stiff target of 203, CSK won the match with a ball to spare as Ravindra Jadeja deposited military medium stuff from R Vinay Kumar into stands.

The India discard bowled a forgettable final over where CSK needed 17 runs to win. This was after Englishman Billings set it up nicely with a magnificent 56 off 23 balls that five huge sixes apart from a couple of boundaries.

The pressure put by Mahendra Singh Dhoni's slow batting (25 off 28 balls) was neutralised by Billings. Chasing a target of 203 needed a blazing start and veteran Shane Watson was up for a challenge, hitting 42 off 19 balls with three fours and equal number of sixes in a 75-run opening stand with Ambati Rayudu (39 off 26 balls).

Tom Curran making his IPL debut got rid of Watson with a short ball and Rayudu was accounted by Kuldeep Yadav as he tried an inside-out shot.

Suresh Raina (14) sustained a calf muscle injury which hampered his running between the wickets with Sunil Narine sending him back. Dhoni and Billings got the chase back on track with a 54-run stand.

With 17 required in the last over, Ravindra Jadeja and Dwayne Bravo ensured the CSK had a perfect homecoming after a gap of three years. 'Sir Jadeja' had the last laugh as he took his team home with a stunning six and one ball to spare. Impressed with CSK's sensational finish in a massive run chase, cricketers and enthusiasts took to Twitter to laud the Yellow Brigade for a 'Whistle Podu' performance.

What a thriller... Well done @ChennaiIPL.. Thanks jaddu 😄😄

What an incredible game this is @IPL #CSKvKKR

Bravo the other night & Billings tonight. Story of CSK’s IPL so far.#CSKvKKR

Great to see Prince Harry @sambillings smoking it to all parts of Chennai tonight ...... #IPL

Snatching victory out of the jaws of defeat...CSK is making a habit of it. Win-the-Toss-Field-Win-The-Game...trend continues. Unbelievable. #CSKvKKR #IPL

CSK CSK CSK what a match... @sambillings you beauty 👊 @ShaneRWatson33 superb job once again with bat an ball @RayuduAmbati hitting the ball sweet... thanks all the fans for coming and cheering in big numbers #yellowarmy #whitslepodu @ChennaiIPL pic.twitter.com/1uncBIV933

Over 400 runs. Chasing 200 + runs. Last over finish. What more advertisement for cricket and for the IPL. People who witnessed it LIVE have more reasons to remember this match for a long time. @ChennaiIPL on a roll. Amazing victory 👏#CSKvKKR

Yet another exiciting finish to the game for @ChennaiIPL. Credit must go to @sambillings for his brave half century. #WhistlePodu all the way! #CSKvKKR

It was a great game.Mid way it was KKR who was at the top n thn CSK got that in the end. But boy oh boy Andre Russell can play n play to kill @IPL @StarSportsIndia

Over 400 runs scored & the Chennai crowd deserved it,having waited for almost 3 years. Russell’s hitting was of the highest class but in the end Sam Billings batted wonderfully under pressure and Chennai have now won both games from a difficult situation. Congratulations #CSKvKKR

Full on Paisa vasool match and it was #WhistlePodu . The crowd deserved the match , the first in almost 3 years at Chepauk. Sam Billings was simply outstanding #CSKvKKR

What a welcome back to the IPL for Chennai. First Russell’s 11 sixes , then Billings ‘ brilliance and a Chennai victory. Romba Nalla ! #CSKvKKR

Sam living up to his billings here #CSKvKKR

Must feel for Russell whose extraordinary hitting came to nought. But what a knock by Billings! Then Bravo & Jadeja finishing it in style

What a fitting home coming for @ChennaiIPL ,always been a Champion side, proving it yet again, a treat for the crowd in #Chepauk and the people of #TN coming to cheer amidst so much #CSKvKKR #IPL2018

31 sixes tonight equal the record of most sixes in an IPL match. The Gujarat Lions- Delhi Daredevils match at Delhi in 2017 had also seen 31 sixes.#CSKvKKR #IPL2018