Bengaluru, April 5: Andre Russell walked in when Kolkata Knight Riders needed 67 off in a little over four overs. Impossible? For lesser beings may be, but not for Dre Russ. He just smoked 48 off 13 balls with seven sixes and a four at a strike rate of 369 to take the Kolkata outfit home by 5 wickets at the M Chinnaswamy stadium here on Friday (April 5).

For the record, Royal Challengers Bangalore made 205 for three and the Knight Riders trumped it with 206 for five. The game-changing storm in the 19th over when the Knight Riders needed 30 runs off 12 balls. Russel destroyed Tim Southee with a barrage of sixes - four of them and a boundary to boot with - as the Kiwi pacer leaked 29 runs of the penultimate over.

By the time the fury ended, the Knight Riders needed just one run from six balls and they ended the match without any more drama with a quick single. But the game had poised for different ending after the first half of the match. 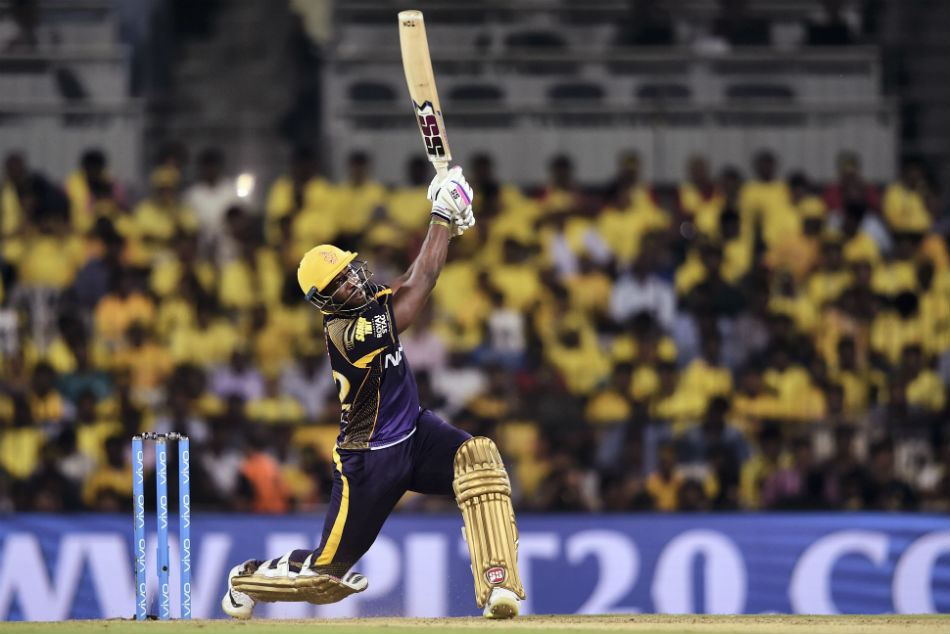 And you guys in the Dugout who said game/set/& match......u may know your cricket but you don’t know @Russell12A !!! WOW u CHAMPION. This calls for Wine my MuscleMan!

Prasidh Krishna landed the ball around the off-stump, right in the driving arc of Virat Kohli. The Royal Challengers Bangalore captain did not miss the opportunity, unfurling that majestic carpet-smooching cover drive for a boundary.

It signalled the beginning of Royal Challengers' run hunt against Kolkata Knight Riders. Kohli (84) and AB de Villiers (63) combined to produce a forceful 100-run stand that guided RCB to 205 for 3, their highest total this season by a good margin.

Any asking rate is child’s play for Andre Russell . What a victory ! #RCBvsKKR

But it was not enough for Royal Challengers as their wait to register the first win in IPL 2019 after four straight defeats - an undesired streak started with the season opener against Chennai - continued.

There have been loud whispers about how the Royal Challengers Bangalore batting has not lived up to the billing and they needed an effort to counter that not so indefensible talk. The two senior batsmen - Kohli and De Villiers - took it upon themselves that task and accomplished it with immense style.

Have never seen anyone smash the cricket ball like @Russell12A does !! Incredible Batting Congratulations @KKRiders on the victory #RCBvKKR @iamsrk pic.twitter.com/DIX3DIYtzx

Kohli was at his classic best while De Villiers went about his job in his usual chutzpah playing shots all around the park. De Villiers had the assistance of fortune too as he was dropped on 35 by Narine off Nitish Rana and he made the Knight Riders pay for that error with a sparkling innings.

Andre Russell is playing a different game to the rest of the world right now. Hitting like we have never seen before.

Kohli, who raised a half-century stand with fellow opener Parthiv Patel, played a chanceless innings and looked set for an IPL hundred but could not go the distance as he drove the ball back to Kuldeep Yadav.

But the breakthrough came to a tad late for the Kolkata outfit as Royal Challengers had already built a platform for a final surge. Marcus Stoinis made the final over bowled by Prasidh count taking 18 runs out of it that propelled Royal Challengers to total in excess off 200.

But on the night, it was all Jamaican beat in Bengaluru.