Bengaluru, Sept. 30: Defending champions Mumbai Indians and Kings XI Punjab will both head into Thursday's Indian Premier League clash on the back of heartbreaking losses. 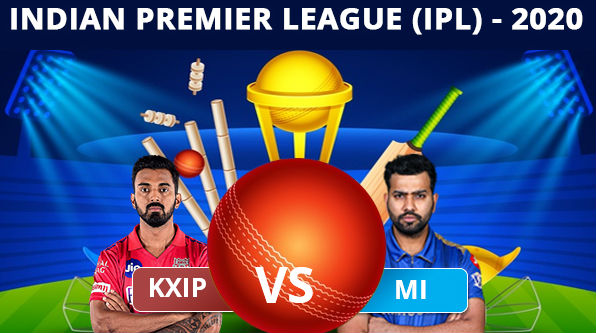 While Rohit Sharma-led Mumbai Indians lost to the Royal Challengers Bangalore in a Super Over, the KL Rahul-led Kings XI Punjab were mauled by the Rajasthan Royals. The Royals successfully completed the highest successful run-chase in the tournament history as the Steve Smith-led side overhauled a target of 224, with three balls to spare.

After suffering such heartbreaking losses, both teams will hope to bounce back in a convincing fashion, when they clash in match number 13 of the 13th edition of the IPL at the Sheikh Zayed Stadium in Abu Dhabi.

.@Gmaxi_32 challenging our camera zooming skills 📹 but we think that was a neat 'shot'. What say? 😛#SaddaPunjab #IPL2020 #KXIP pic.twitter.com/MV1XP7RdO8

Mumbai began their season with a loss to Chennai Super Kings. But the champs bounced back with a win over the Kolkata Knight Riders. But they once again failed to notch up a win in their next match as they lost to the Virat Kohli-led RCB. Rohit Sharma and co. head into Thursday's match on the back on two losses and one win.

The Punjab has also scripted a similar story till now. After losing to Delhi Capitals in their opener, KXIP came back strongly to register their first points by defeating RCB. But, despite a fabulous batting display, they lost to Rajasthan. KXIP have failed to tighten the screws when it mattered most. In their two losses, they were in a good position but could not grab the moments.

Their bowling looked out of sorts against Rajasthan as they failed to defend a big total with Rahul Tewatia hitting pacer Sheldon Cottrel for five sixes in an over to win the match for his team. The Royals registered the highest run chase of the tournament against Punjab, and the KL Rahul-led side will look to put that loss behind them, when they face the defending champions.

Skipper Rahul has led from the front, while Mayank Sharma has also been in great form, registering his first IPL century this season. The bowlers led by Mohammed Shami, have had their moments, but they lacked consistency as Rajasthan took them to the cleaners. Ravi Bishnoi was the only economical bowler in the previous game.

The bowlers will have to tighten the screws against a Mumbai line-up, which boasts of several power-hitters. Rahul and Mayank will also need to carry on their form in their fourth game of the season. Against Rajasthan, the pair shared a 183-run opening stand with Agarwal scoring his maiden ton while Rahul, fresh from recording the highest score by an Indian in IPL history, hit a 54-ball 69.

Meanwhile, the Mumbai Indians are blessed with a splendid batting firepower with the likes of captain Rohit Sharma, Suryakumar Yadav and Ishan Kishan at the top-order, followed by the big-hitting Pollard and Hardik Pandya.

A major cause of concern for them will be pace ace Jaspirt Bumrah's inconsistency. The speedster has picked up only three wickets in as many games and has failed to make the kind of impact that is expected from a bowler of his caliber.

With both teams coming into the game on the back of disappointing losses, it will be interesting to see which team get their act together quickly and notch up a much-needed win in Thursday's game.

(Source: With inputs from PTI)