Bengaluru, Sept. 28: Just ten games into the 13th edition of the Indian Premier League and the tournament has already witnessed two superovers! This season has been a story of 200+ scores and thrillers at the very onset, and Monday's game was no different. 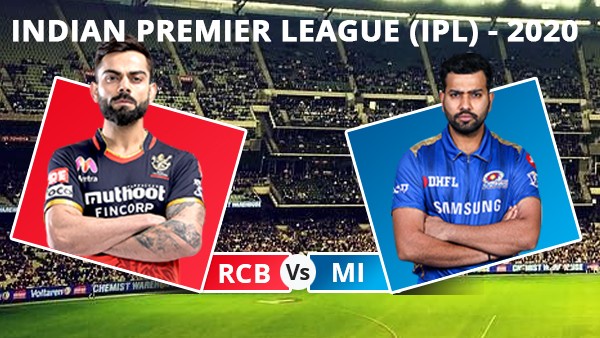 After being put into bat, AB de Villiers churned out a power-packed performance for the Bangalore team as RCB posted a mammoth total of 201. Though skipper Kohli once again disappointed with the bat, putting just 3 on the board, it didn't dent the Bangalore team's hopes as ABD along with Devdutt Padikkal and Aaron Finch helped the Challengers post a strong total of 201.

Shivam Dube's blistering 27 no off 10 balls helped RCB cross the 200-mark. Dube aptly supported de Villiers, who hammered the Mumbai bowlers in the death overs to remain unbeaten on 55 of 24. His innings was studded with four sixes and as many boundaries. Bumrah endured another bad in office as he leaked 42 runs for the loss of no wicket. James Pattinson too gave away 51 runs in his four overs and the RCB batsmen ripped apart the Mumbai bowlers.

The last five overs produced 78 runs with Shivam Dube's 27 not out off 10. While Australia's white ball skipper Finch scored 52 off 35 balls to get his team off to a flying start, the extremely elegant Padikkal upped the ante in the later half with some delightful big hits, scoring 54 off 40 balls. The duo added 81 runs for the opening stand.

Padikkal's innings was studded with five boundaries and two sixes and a good stand of 62 runs for the third wicket with De Villiers, who then provided the final flourish as he has been doing for years now.

Thrilling game of cricket. Proud of the character shown by the team. 💪💪 @RCBTweets #PlayBold pic.twitter.com/k8Jqb8Bg1S

But the unpredictable nature of T20 cricket once again showed its colours. Though the Bangalore bowlers did well to pick up early wickets, removing Rohit Sharma for just 8 and the dangerous Suryakumar Yadav for a duck, the last few overs changed the course of the game.

Ishan Kishan who came into the team for the Challengers' match was the X-factor for a lackluster Mumbai Indians as he scored his highest IPL score. Kishan agonizingly lost his wicket on 99.

When Mumbai was four down and the run rate had creeped up, Kieron Pollard came to Mumbai's rescue with a quickpower 60 off 24. The big-hitting West Indies player brought up his 50 off just 20 deliveries.

Pollard hammered Zampa for 27 in the 17th over to put the pressure back on RCB. Kishan also aptly supported his teammate scoring nine huge sixes to help Mumbai reach the total. The Mumbai Indians needed 90 off the last five overs to win the match. A tough ask? The blistering partnership between Pollard and Kishan made it look like cakewalk.

But the scales were not tilted in their favour tonight. With five needed off the last ball to win, Pollard muscled it for a boundary, eventually taking the match to a superover. The second of the season.

Washington Sundar was clinical with the ball for the Challengers, as he gave away just 12 runs and picked up a wicket.

In the Superover, Mumbai Indians, batting first were restricted by Saini who gave away just 7 for 1 wicket. With Bumrah bowling the superover, RCB duo Kohli and man-of-the-match De Villiers, took it down to the last ball to win the match. Needing 1 off 1, captain Virat finished it off in style with a boundary as RCB notched their second win of the season. With the loss, the defending champions fell to their second loss of the season.

While RCB will next take on the Rajasthan Royals on Saturday, the Mumbai Indians will face Kings XI Punjab on Thursday.