Bengaluru, May 1: It was the Kieron Pollard show that shone the brightest at the Arun Jaitley Stadium on Saturday, as Mumbai Indians notched up a thrilling 4-wicket victory over Chennai Super Kings in match no. 27 of the IPL.

After electing to bowl first, Chennai put up a massive total of 218, riding on brilliant half-centuries from Faf du Plessis (50 off 28), Moeen Ali (58 off 36) and Ambati Rayudu. 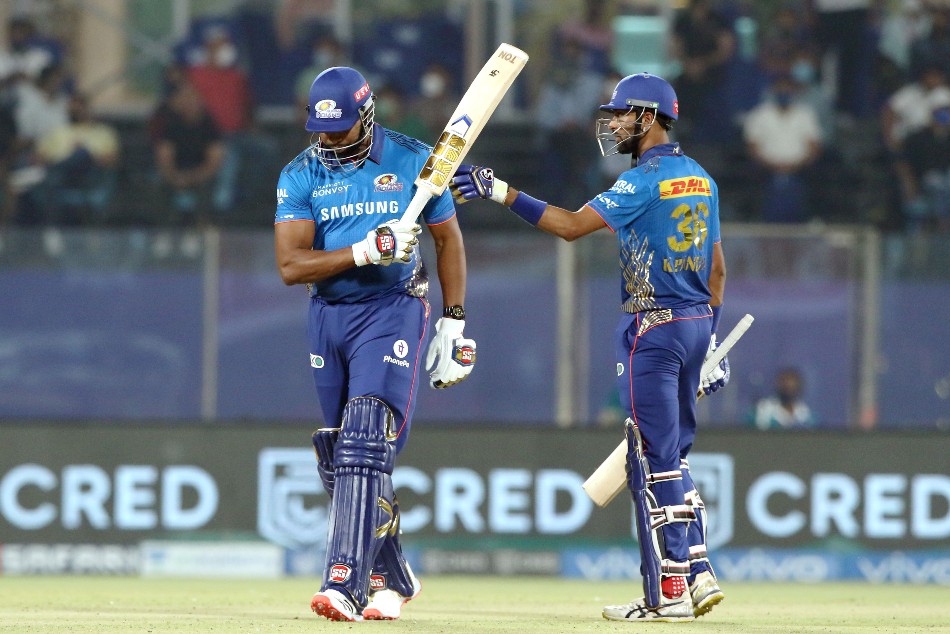 But Rayudu’s innings lifted Chennai past the 200-mark as he played an unbeaten knock of 72 off 27. Though the Mumbai bowlers leaked runs, with Jasprit Bumrah going for 56 runs, Pollard impressed with the ball picking up two wickets and giving away just 12 runs in his two overs.

In reply, Rohit Sharma and Quinton de Kock handed Mumbai a steady start. But after losing three wickets in quick succession, Chennai looked to be in control. But the game slipped away as the Pollard onslaught began.

Pollard hit the fastest 50 of the season, overshadowing Delhi Capitals’ opener Prithvi Shaw’s 18-ball 50 against KKR, as he brought up his half-century off just 17 deliveries.

Despite MI losing wickets at the other end, Pollard saw it through with an unbeaten 87 off 34. With Saturday’s win Mumbai pulled off the second highest successful chase of the IPL.

Despite the loss, Chennai Super Kings remained at the top of the table with ten points from seven matches. Meanwhile, Mumbai Indians remained fourth with 8 points from 7 matches.

Here's how the MI vs CSK IPL match panned out:

End of the match: The Kieron Pollard blitz saw Mumbai Indians snatch a 4-wicket win over Chennai Super Kings. After Ambati Rayudu's show during CSK's innings, Pollard set the stadium on fire with an unbeaten 87. The big-hitting West Indies also scored the fastest IPL 50. After today's match there is no change in the points table, as Chennai remain on top and Mumbai remain fourth.

Two quick singles as MI win the match by 4 wickets! It was the Pollard show that snatched the game away from Chennai Super Kings

SIX!!! Pollard finds the important boundary. 2 needed off 1 now. Pollard on strike. Can he finish it off?

DROPPED! Shardul Thakur couldn't get there but prevents the boundary. 8 needed off 2

DROPPED!! The pressure gets to Faf du Plessis as he drops Pollard. That might cost CSK the game

6-4!! Pollard keeps MI in the game as he hammers Shardul for back-to-back boundaries.

OUT!! Sam Curran comes to the rescue as Krunal Pandya goes for 32 off 23

SIX!! A bat change and Krunal Pandya joins the party. MI cruising through the chase at the moment.

50 up for Pollard. Fastest fifty this season as Pollard brings up his half-century off 17 balls.

SIX!!! WHACKED over long off! Shardul left clueless against Pollard. The big hitting West Indies player follows it up with a boundary

SIX!! Pollard keeps the pressure on with back-to-back maximums. 16 runs off the over

SIX!! Pollard whacks it over midwicket

Two back-to-back maximums to end the over. Expensive over from Jadeja as 20 runs come off it.

SIX!! Pollard whacks this over long-off

10 runs come off Shardul Thakur's over

SIX!! Krunal hits Thakur for a maximum of the first delivery

OUT!! In the last three overs Chennai has picked up a wicket in each over. De Kock goes for 38 off 28 as Moeen Ali takes a follow on catch to remove the opener.

OUT!! And Jadeja's removed the destructive Suryakumar Yadav. Yadav goes for 3 off 3

OUT!! And Shardul Thakur hands CSK the big wicket of Rohit Sharma. The skipper goes for 35 off 24 as he slices it to Gaikwad over extra cover. MI lose their first

Shardul Thakur comes into the attack

SIX!! Superb shot from Rohit as he lofts it over mid-on to begin the over with a maximum

Excellent over from Chahar as he gives away only four

Back-to-back fours from Rohit. The first one goes past third man, while he sends the second one over midwicket. 10 runs off Curran's over

SIX!! The first one of the Mumbai Indians innings as De Kock lifts it high over fine leg

Big appeal for LBW. Given out. Rohit reviews it

Back-to-back boundaries to begin Chahar's over! While the skipper edges the first one past slip, the second one races past third man

FOUR!! De Kock sends this towards the third man boundary to hit Curran for four.

Just the first ball boundary as only 8 runs come off the first over. MI have their task cut out

FOUR!! Chahar hit for a boundary on the first delivery! And its on! A smacking start

CSK in a huddle. Time to defend the massive total set up by their batsmen. Mumbai have their task cut out

FOUR! Dropped on the final ball as it races away for a boundary. Another supreme batting show from the Super Kings tonight as they post 218/4.

SIX!! Rayudu finds the boundary in the final over as he smashes it over square leg for six

10 runs off Bumrah's final over. A night to forget for Bumrah as he leaks 56 runs and picks up just one wicket

FOUR! Jadeja finds the first boundary of Bumrah's over as he flicks it past fine leg. 200 up for CSK

Bumrah in for his final over. A wide to begin

SIX-FOUR!! Rayudu's onslaught continues. First a smashing six over midwicket, followed by a four to bring up his 20th half-century of the IPL. Rayudu's half-century comes off just 19 deliveries. Tonight Jadeja as the best seat of the show as he takes a backseat

Free hit. Bumrah's over not over yet. Four more off the free hit as 21 runs come off the over

SIX!! A maximum to end Bumrah's over. Rayudu sends it over deep extra cover

FOUR!! Jadeja joins the action as he finds his first boundary of the evening. Hits this past the keeper for four

BACK-TO-BACK MAXIMUMS!! Superb end to Kulkarni's over as Rayudu smashes to sixes on the last two balls to pick up 17 runs off the over

Rahul Chahar's spell done. 10 runs off his final over as he gives away 32 runs in his four overs. No wickets for Chahar tonight

SIX!! Huge hit as Rayudu smashes it into the stadium over square leg

A dot to begin Chahar's final over. No wickets for him yet this evening

Decision overturned as Jadeja keeps his wicket. Big relief in the Chennai camp

Big appeal from Pollard and the umpire takes his time but the finger goes up. Jadeja reviews it immediately.

OUT!!! Another big wicket! Pollard's over turning out to be the key for MI as CSK lose two important wickets. Raina for 2 off 4 as Pollard pockets back-to-back wickets

50 up for Faf du Plessis! Du Plessis brings up his 20th IPL fifty from just 27 deliveries. And Pollard removed the CSK opener just as he brings up his 50. CSK lose their third

Suresh Raina, playing his 200th IPL match, is the new batsman in for CSK

OUT!! Bumrah hands MI the breakthrough as he removes the destructive Moeen Ali. Ali goes for 58 off 36 as de Kock picks him up

BACK-TO-BACK MAXIMUMS AND A FOUR! Du Plessis begins Bumrah's over with two consecutive sixes. While the two sixes are lifted over midwicket, Du Plessis finds the boundary past the keeper.

Back-to-Back boundaries from Moeen Ali! Another expensive over as Neesham leaks 18 runs

Not out as Du Plessis makes it back just in time

Appeal for run out! Third umpire reviews it

50 up for Moeen Ali! 4th IPL fifty as he brings up his half-century of 33 deliveries

BACK-TO-BACK SIXES!! After ending the last over with a maximum, Ali hits Neesham for six on the first ball as he sends it over midwicket

SIX!! Du Plessis finds the maximum on the last delivery of Chahar's over as he hammers it over leg side. Expensive over from Chahar as 16 runs come off it. CSK at 77/1 after 9 overs

SIX!! Another lovely shot from Moeen Ali as he sends it flying over long-off for a maximum

8 runs off Neesham's first over

After a dot to begin, Neesham's been hit for a maximum as Ali pulls it over midwicket for six.

Jimmy Neesham comes into the attack

Big appeal made for caught behind. Not given. MI don't review it. 4 runs off Chahar's first over

Rahul Chahar comes into the attack after the powerplay

End of the powerplay: Chennai recovered well after the early wicket to post 49 runs at the end of six overs.

FOUR!! Ali flicks this towards deep backward square leg for the first boundary of the over

SIX!! Ali lifts this over square leg to keep the boundaries flowing. 9 runs off Bumrah's first over

Jasprit Bumrah into the attack

FOUR!! After just two singles of the over, Ali finds the boundary ropes on the final ball as he pulls it past midwicket. 6 runs off Kulkarni's over

Expensive over from Boult as 12 runs come off it.

FOUR!! Lovely timing from Ali as he hits back over Boult's head for a boundary

SIX!! Moeen Ali off the mark with a maximum! Lovely shot from Ali as he lifts it over deep square leg for six

Good over for Chennai as 11 runs come off the over. CSK at 15/1 after two overs

SIX!! First maximum of the evening from du plessis as he lifts this over mid-off

FOUR!! Faf du Plessis sends this towards fine leg to begin Kulkarni's over with a boundary

Moeen Ali the new batsman in. CSK aft 4/1 after the first over

OUT!! What a start for Mumbai. Boult removes the dangerous Ruturaj Gaikwad in the very first over. Gaikwad goes for just 4 off 4 as Hardik Pandya picks him up at point

FOUR!! Lovely shot from Ruturaj Gaikwad for a boundary

A dot from Boult to begin

Playing XIs for tonight's game: While Mumbai have rung in two changes, Chennai will be fielding the same side.

A look at the Playing XI for #MIvCSK

MS Dhoni after the toss: We were looking to field first as well. The pitch has been surprisingly goof. The wicket has got better for batting in the second half, but it has been goof at the start too. Playing the same side

Rohit Sharma after winning the toss: It looks like a good pitch and we’ve played here. Made some tactical changes. Dhawal Kulkarni in place of Nathan Coulter-Nile and Jimmy Nisham in place of Jayant Yadav. The guys love playing big games and you can judge your character in big games.

James Neesham set to make MI debut. Neesham was handed the cap during the MI huddle

Ten minutes to go for the big clash tonight.

Are you ready for a mouth-watering clash❓ pic.twitter.com/xlrSNgjM1H

In contrast to MI's season, Chennai are enjoying a smashing season. After losing their first match of the edition, the Super Kings have been ticking all the boxes this season, as they've won five on the trot and sit comfortably on top of the table

Up, Close and Uncut!
One shot show into the Super practice . #MIvCSK #WhistlePodu #Yellove 🦁💛 pic.twitter.com/c5bkaCx9Jo

Mumbai Indians have endured a mixed season so far, having won three and lost three matches.

Both teams will enter tonight's match on the back of similar wins. While Rohit Sharma-led MI defeated Rajasthan Royals by 7 wickets, CSK also notched up a 7-wicket win over Sunrisers Hyderabad.

Hello & welcome to mykhel’s coverage of match no. 27 of the IPL. In tonight’s clash, table-toppers Chennai Super Kings will take on defending champions Mumbai Indians at the Arun Jaitley Stadium. Stay tuned as we bring you the toss, pitch and match updates. The MI vs CSK match is set to get underway at 7:30pm IST in New Delhi.