Mumbai, May 18: Lucknow Super Giants sealed a playoff spot after a 2-run victory over Kolkata Knight Riders in match 66 of Indian Premier League (IPL) 2022 at the Dr DY Patil Stadium in Mumbai on Wednesday (May 18).

After Quinton de Kock (140 not out off 70 balls) and KL Rahul (68 not out off 51 balls) shared an unbeaten record opening stand to take LSG to 210, KKR went agonisingly close, but Stoinis held the nerve as Evin Lewis took a stunning catch to dismiss Rinku Singh (40 off 15 balls) to seal the match.

Earlier, opting to bat first, the opening duo shared the highest ever partnership in IPL, smashing 14 sixes and 13 fours in their knock. Their partnership was also the third highest for any wicket in IPL history.

None of the KKR bowlers could pose any challenge with Sunil Narine returning with figures of 0 for 27, while Tim Southee and Andre Russell conceded 57 and 45 runs in four and three overs respectively. 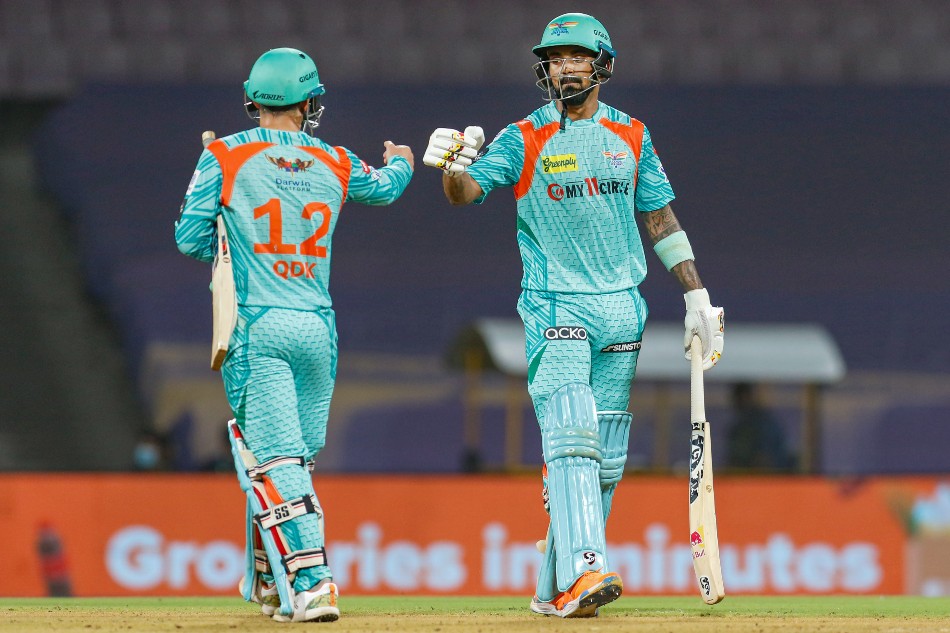 While the result ensures LSG's route to the playoffs, it also sends KKR home after they suffered their eighth defeat and end the season with 14 points.

Here is the post match comments from the winning captain, losing captain, man of the match along with the full list of award winners from KKR vs LSG 2022:

Cred Power player of the match: Mohsin Khan (Lucknow Super Giants) - 2 for 6 in 2 overs inside the powerplay

Upstox most valuable asset of the match: Quinton de Kock (Lucknow Super Giants) - 140 not out off 70 balls

Losing skipper Shreyas Iyer said: "I am not feeling sad at all. That was one of the best games of cricket I have played. The way we should our character and attitude was simply outstanding."

On Rinku's knock, Shreyas said: "I love the way Rinku got us till the end but unfortunately couldn't time it when two balls were remaining, he was really sad. I was hoping he could finish the game for us and could have been the hero, but still played a fantastic knock and I am really happy for him."

On the pitch, Shreyas added: "When we came in, I never thought it would play this way because it was dry and the grass wasn't that wet. I thought there would be little help for the spinners but once they started going. LSG took on the bowlers and got a par total."

On the last few matches, Shreyas said: "It was a do or die situation for us, even after losing two wickets in the powerplay our mindset was to go for the chase and take it close as possible and put them under pressure."

On the season, Shreyas added: "It was a volatile season for us, we started great but lost five games in a row and I personally feel we did a lot of chopping and changing, we had to do that because of the niggles and form, but we also got to know the players such as Rinku. The vibe has always been positive in the dressing room and we never hit the panic button."

On relationship with coach Brendon McCullum, Shreyas said: "I have built a really good relationship with Baz (McCullum) and he is someone who is calm and composed even when the situation is going out of the way, you can go and talk to him at any point of the game. He's got that aura when he walks around the players and never judges the players, all of us are equal for him."

Meanwhile, Marcus Stoinis said: "Initially, my feeling was I should've bowled through the middle. At the start of the over you play a bit to the conditions, a bit to the long boundary, a bit to what the batter wants to do.

"As things get worse, you go towards what you like to bowl and what works for you. That's a learning for me. Feel more comfortable going for the straighter yorker. We're always aiming at something - at the feet of the batters, at the stumps, at the cones in practice."

On Evin Lewis' one-handed catch, Stoinis joked: "We're giving him Man of the Match (Lewis for the catch). The conference happens which is good, everyone wants to have an input. But you have to bowl what you believe is your best ball."

Winning captain KL Rahul said: "I should probably get paid more for games like this. We had missed games like this, in this season. Haven't been many games that have gone down to the last ball, maybe some which went to the last over.

"Happy to be on the other side. Could easily have been on the losing side and have gone back home thinking we lost due to some poor cricket. Good way to finish the last game of the league season.

"Credit to both teams to make such a brilliant game of cricket. Can't say we held our nerves better because it was a matter of three runs. For Stoinis to execute those plans in the last two balls to get us the win, was brilliant.

"We batted well, started well with the bat. We knew that KKR would come hard at us, credit to them as they kept playing good shots. The only talk during timeouts was to back your best balls. The minute we went away from the plans was when it became easier for the batters."

On the manner of victory, Rahul added: "Good learning for us. Wins like these help to keep the team together. I was a spectator today in the last few overs. He (De Kock) was striking the ball so crisply and cleanly.

"What we lacked in some of the games were that the guys who were having good days weren't winning us games. Guys getting 30s and 40s had to get us 80s and 90s, and that's exactly what he did."

On Lewis' catch, Rahul said: "Everyone has been brilliant, starting with Lewis, that catch was brilliant. He's been struggling with tummy issues for the last few weeks, been in and out of the team. Never easy. Didn't get to bat today. But that's what you want to see from players, their desire to contribute in any way possible."

On Mohsin's performance, Rahul said: "Mohsin has been outstanding for us in the last few games. He's got the skills but the key thing has been his knowledge of when to use those skills. He'll be donning the Blue jersey soon the way he is going."

Player of the match, Quinton de Kock said: "I was a little bit cooked (after his innings) but it was a matter of getting some refreshments and get on with it I guess. It was a bit of frustration that came out (on his aggressive century celebrations)."

On his knock, De Kock added: "Felt really good to come out and do well. Was trying to keep it in, but when it came out, felt good. To be honest, not really (whether he thought the game would get so close)."

On KKR's chase, De Kock said: "Obviously they played really well, assessed conditions well and came hard at us. I thought he (Stoinis) would defend it easily. But when the first three went, I thought the game was done for us. But that catch, turned things for us. As they say, good catches win matches."