Mumbai, May 15: Rajasthan Royals clinched a comprehensive 24-run win over Lucknow Super Giants at the Brabourne Stadium on Sunday.

The Royals' win saw them climb to second place on the points table, while Lucknow slipped to third. Following the 63rd IPL match this season, Gujarat Titans are still the only team to have officially qualified for the playoffs. 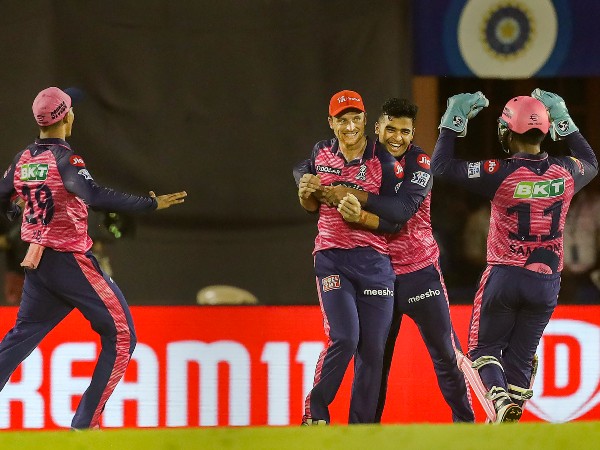 Both Titans and Royals are on 16 points from 13 games, with a game in hand.

Rajasthan got off to a shaky start as they lost the destructive Jos Buttler (2 off 6) early. Avesh Khan knocked back the off stump to hand LSG a strong start and reduce RR to 11/1 in 2.2 overs.

But Royals overcame the shaky start as Sanju Samson and Yashasvi Jaiswal's stitched together a second wicket stand of 64 off 40. Jaiswal, who was dropped by Mohsin Khan off an Avesh Khan delivery on 13, capitalised on the lineline handed to him as he scored a quickfire 34 off 19 in the powerplay.

The duo helped Rajasthan put up a strong powerplay score of 51/1. Jason Holder put the brakes on Royals innings as he removed skipper Samson (32 off 24). The Royals skipper was picked up by Hooda as Rajasthan were reduced to 75/2 in 8.5 overs.

Ayush Badoni handed Lucknow the big wicket of Jaiswal as RR lost their third. Jaiswal skied it and Badoni took a follow on catch to remove the opener and reduce RR to 101/3 in 11.2 overs. Thereon, the occasional wickets kept RR in check.

Padikkal who was playing a solid knock was sent back by Bishnoi as he was picked up by Krunal Pandya at deep midwicket boundary. Padikkal's solid 39 off 18 came to an end as Royals lost their fourth. A solid catch from Marcus Stoinis saw the set Riyan Parag (19) depart. Bishnoi picked up his second as Royals were reduced to 149/5 in 17.1 overs.

But quickfire cameos from Trent Boult (17) and Ashwin (10) saw Rajasthan set LSG a modest target of 178.

In reply, player-of-the-match Trent Boult pocketed back-to-back wickets to reduce LSG to 15/2 in 2.2 overs. While Quinton de Kock (7 off 8) was picked up at point by Neesham, Ayush Badoni fell for a duck on the very next delivery.

Skipper KL Rahul was next to depart as Yashasvi Jaiswal picked up a comfortable catch at point. Prasidh Krishna reduced LSG to 29/3 in 5.3 overs to hand RR the big wicket of the LSG skipper. Royals restricted LSG to 34/3 in the powerplay.

The Super Giants fought back with a fourth-wicket stand between Deepak Hooda and Krunal Pandya. The duo added 65 off 46 to keep LSG on course.

Ashwin broke the stand, as Buttler and Riyan Parag pulled off a stellar assisted catch to end Pandya's (25) innings. In another big blow to LSG's chase, Chahal struck next to remove Hooda (59 off 39) and reduce RR to 116/5.

Despite a quickfire 17-ball 27 from Stoinis, LSG was restricted to 154/8 as they fell to their fifth loss of the season. For RR, Boult, Prasidh Krishna and Obed McCoy picked up two wickets each.

Lucknow will take on Kolkata Knight Riders in their final league game on Wednesday (May 18). On the other hand, Rajasthan Royals will take on defending champions Chennai Super Kings on Friday (May 20).