IPL 2022: Most important thing when you are bowling at the death is to stay calm: Bhuvi tells Umran

Bengaluru, May 18: Umran Malik was clinical for the Sunrisers Hyderabad on Tuesday, as Kane Williamson's side clinched two crucial points over Mumbai Indians at the Wankhede Stadium.

Malik played a key role in SRH's narrow win as he picked up three crucial wickets from three overs, returning with a spell of 3 for 23. Following the game, Malik opened up about his wicket-taking celebration. The SRH youngster said his fist-pumping celebration has been influenced by mentor and bowling coach Dale Steyn.

Talking to senior teammate Bhuvneshwar Kumar in a video posted on the Indian Premier League website, Malik said Steyn always celebrates in this manner whenever he takes a wicket during the net sessions and that's where he's picked up the celebration from. "Dale sir stands as the umpire in the nets when I am bowling.

"When I take a wicket he does this (celebration). One day I also did that and it has since then become a habit," Malik told Bhuvi in the video posted on the IPL website.

He further added that during SRH's net sessions Steyn has taught him a lot. "I have learnt a lot from him. If we are bowling for three hours in the nets, he'll keep standing with us throughout the three hours."

When Bhuvneshwar asked him whether speeds come naturally, the pace sensation stated that he naturally bowls fast. "I bowl fast naturally. So the pace keeps getting generated by itself. I put in a lot of effort with my body. Even in tennis-ball cricket, I would bowl a lot of fast yorkers. So no one would feel like playing against me. That has helped me a lot. The tennis ball is much lighter, so if you are bowling fast with it, it helps you when you bowl with a leather ball," Malik told Bhuvi.

Umran, who has taken 21 wickets so far in his first full IPL season, said, "This is my first full season, this was my 13th game. I have played all the matches, so that feels really good. I have taken wickets and gone for runs too, so in the matches where I have been expensive, I've tried to learn from that, from the mistakes that I've made."

Meanwhile Malik asked Bhuvi what made him such a specialist death bowler, Bhuvi said, "The most important thing when you are bowling at the death is to stay calm. Many times, if you concede a boundary, you come under pressure. So if you can keep a calm mind, it will help you.

"It was luck that it (the 19th over) turned out to be maiden. But I was trying to bowl yorkers. I felt the yorker was the best option on that wicket to prevent run-scoring, if it was executed well. Luckily, all deliveries landed in a good spot." 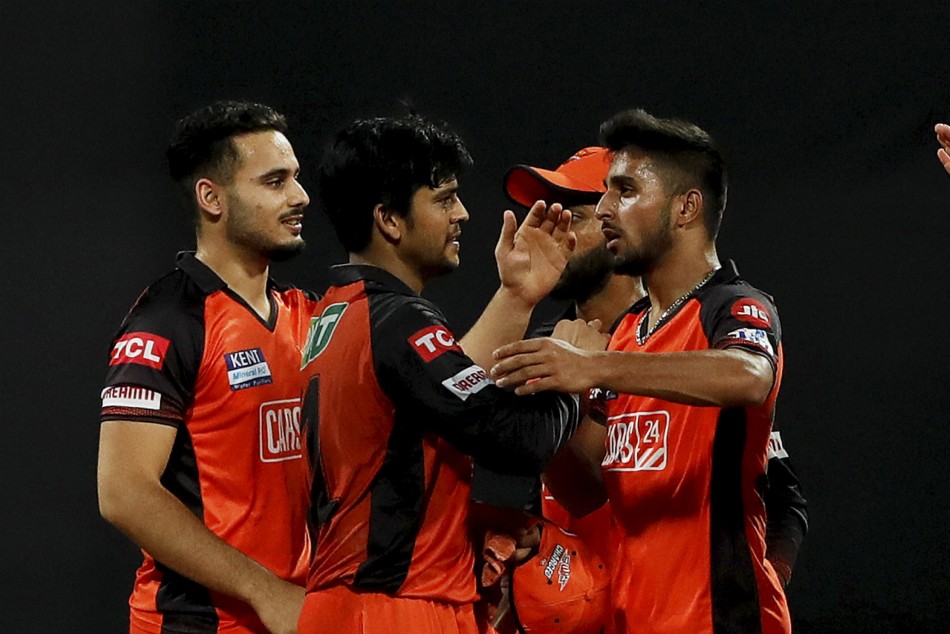 Coming to the match, Sunrisers clinched a narrow 3-run win over Mumbai Indians. For Sunrisers Rahul Tripathi played a match-winning knock of 76 off 44 to pick up the man-of-the-match award and keep SRH's slim chances of the playoff race alive.

In their final league game, Sunrisers will take on Punjab Kings on Sunday (May 22).