Navi Mumbai, May 16: Spinners Axar Patel and Kuldeep Yadav were inspirational in the middle overs even as Shardul Thakur complemented the duo with a career-best IPL figures as Delhi Capitals inched closer towards play-off qualifications beating Punjab Kings by 17 runs in an IPL match on Monday.

It is between overs 6-14 where Delhi won the game as Kuldeep and Axar cumulatively gave away only 28 runs in seven overs with four wickets between them. With this win, DC jumped a place to fourth with 14 points from 13 matches. 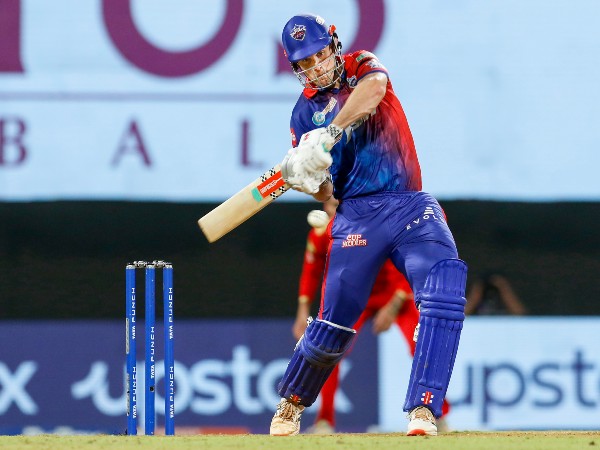 Royal Challengers Bangalore (14 from 13 matches) have same points as DC but they were pushed down to fifth spot as they have -0.323 NRR compared +0.255 of Delhi. Punjab, who remained at seventh spot with 12 points from 13 matches, are virtually out of reckoning for a play-offs berth as they also have a -0.043 net run rate.

Chasing 160 for a win, Punjab suffered a batting collapse after a good start. Jitesh Sharma (44 of 34 balls) and Rahul Chahar (25 not out off 24 balls) made a late fight back with a 41-run stand -- highest in their run chase -- for the eighth wicket but that proved to be too little too late.

Punjab began on a promising note with in-form Jonny Bairstow punishing Khaleel Ahmed and Nortje with fours and sixes to take his side to 27 for no loss at the end of third over. But from there the collapse began as five Punjab batsmen gone back to the hut one after the other as they were reduced to for 5 at the end of the eighth over.

Bairstow (28 off 15 balls) fell to Nortje in the fourth over before a struggling Shrdul Thakur took two wickets -- that of Bhanuka Rajapaksa (4) and Shikhar Dhawan (19) -- in three balls in the sixth over to change the complexion of the game.

Punjab were 54 for 3 at the end of powerplay and three balls later Axar Patel claimed his 100th IPL wicket with a special one -- that of Punjab captain Mayank Agarwal's scalp.

Mayank (0), who has been struggling this season, went for a cut to an arm ball but it went through the gap between bat and pad to crash into the middle stump. There was no respite for Punjab as Liam Livingstone was out in the eighth over, stumped by Rishabh Pant for Kuldeep's first wicket.

Kuldeep returned for his second over to dismiss Harpreet Bar (1) with him wrong-un beating the batter before going through the gate to crash into the stumps. It was all over for Punjab by then as they were reduced to 68 for 6 at the halfway mark. Punjab needed 39 off the final three overs but David Warner pulled off a fine catch at long off to dismiss Jitesh ended the game in favour of DC.

Earlier, Arshdeep Singh and Livingstone snared three-wickets each as Punjab restricted Delhi to 159 for 7. Marsh first added 51 runs with Sarfaraz Khan (32) and then another 47 runs with Lalit Yadav (24), after DC lost opener David Warner (0) off the first ball of the innings.

DC scored at a brisk pace after being asked to bat but they suffered a a middle-order collapse, losing three quick wickets. It was Australian Marsh, who anchored the DC innings. He completed his fifty with a boundary in the 17th over. He hit four fours and three sixes but ran out of partners.

The move to open bowling with Livingstone (3/27) worked as he removed Warner, who gave a sitter to Rahul Chahar at backward point. Marsh and Sarfaraz then tried to steady the ship. Marsh hammered back-to-back sixes off pacer Kagiso Rabada (1/24), including one lofted shot as Delhi added 15 runs in the second over.

Sarfaraz was brutal on left-arm orthodox bowler Harpreet Brar (0/29), hammering him for a maximum, a slog sweep and two successive boundaries, as Delhi fetched 15 runs in the third over. Sarfaraz hammered five boundaries and a six as Delhi raced to the 50-run mark in the fifth over.

But Sarfaraz's cameo ended after he mistimed a lofted shot off Arshdeep Singh (3/37) with Chahar taking a running catch. Then Marsh and Lalit mixed caution and aggression. At 86/2 after 10 overs, the stage was set for a big score. But Punjab pegged back DC, by grabbing three quick wickets and reducing the opposition to 112/5.

First, Arshdeep used his slow bouncer to remove Lalit and then Livingstone sent back Rishabh Pant (7), who was stumped by Jitesh Sharma. Livingstone had his third wicket, when he removed Rovman Powell (2). Wickets kept tumbling for Delhi even as Punjab bowlers conceded 43 runs in the last five overs.