Jasprit Bumrah wedding: India cricketer getting married to Sanjana Ganesan on THIS date in Goa?

New Delhi, March 8: The news of India pacer Jasprit Bumrah getting married soon is one of the hot topics in the Indian media. The suspense over who is going to the be star cricketer's bride is creating a lot of waves and increasing the curiosity quotient on social media.

The speculations are now rife that the India speedster is set to tie the knots with former model and sports anchor Sanjana Ganesan. The sources, earlier last week, confirmed about the India cricketer's wedding which is going to be held in Goa. 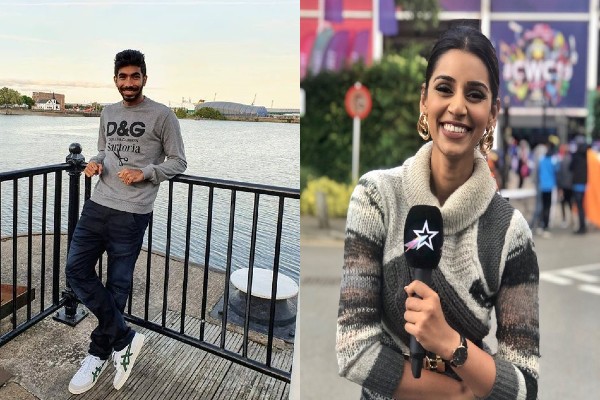 Jasprit Bumrah and Sanjana Ganesan have never been spotted in public and if the two are actually getting married then one can say that they brilliantly kept their relationship under the wraps.

However, an image of the two sharing a frame is getting viral on social media. It is a BCCI video in which Sanjana - who is a Star Sports anchor - could be seen interviewing Bumrah during the BCCI Annual Awards event.

Sanjana is on leave reports say

Sanjana - who is a Miss India 2014 finalist and also participated in the MTV reality show Splitsvilla 7 before starting her career as a sports anchor and presenter - is apparently on holiday.

This has further fanned the speculation that she might be the India cricketer's lady love and must be busy with the wedding preparations in Goa.

When is the wedding?

As per a Zee Hindustan report, the India cricketer is getting married on March 14-15. There is still very little known about the Mumbai Indians' speedster's wedding. But reports have confirmed that it is expected to be a destination wedding in Goa.

Bumrah will to Goa via Mumbai along with his mother and sister. The speedster has maintained silence across his social media handles ever since he pulled out of the fourth Test against England. However, after Team India's victory in the fourth Test in Ahmedabad, the groom-to-be congratulated his teammates for winning the series and entering the finals of the ICC World Test Championship against New Zealand in June.

Bumrah has been on the most eligible bachelor's list

The soft-spoken India cricketer has been on the list of most eligible bachelors in the country for quite some time. The Gujarat speedster has never been a part of a controversy.

His posts on social media handle also reveal that he's very close to his mother and sister. During the COVID-19 lockdown, the cricketer was even seen doing house chores and helping his mother out at home.

Wedding will an intimate affiar

As per a Times of India report, only 20 guests will be flying to Goa for the nuptials. The couple wants to keep the wedding a private affair and the guests would not be allowed to carry their phones to the function.

Bumrah is very popular amongst girls and there have been several instances when the cricketer's posts on his social media handle in which he could be seen flaunting his chiselled body made girls drooling.

Speculations were also rife that the India cricketer is going to marry south actress Anupama Parameshwaran but the actor's mother Sunitha Parameshwaran told a web portal that the two are just friends and rejected the wedding rumours.