Kolkata Knight Riders stayed afloat in the playoffs race as they notched up a big 54-run win over Sunrisers Hyderabad. 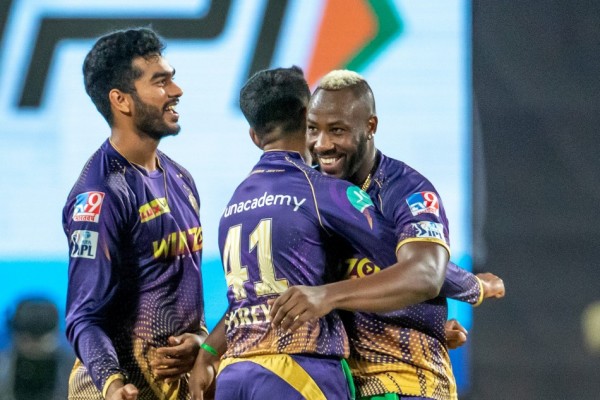 It was the Andre Russell show at the Maharashtra Cricket Association Stadium as the KKR all rounder put up a brilliant show with both bat and ball to hand KKR two crucial points and gave their runrate a big boost.

After Russell's unbeaten knock saw the Knights put up a strong total of 177/6, the KKR bowlers picked up regular wickets to hand Sunrisers their fifth consecutive loss in the ongoing IPL season.

Electing to bat first, KKR lost the hard-hitting Venkatesh Iyer (7) early as Marco Jansen struck in the second over to reduced KKR to 17/1. But opener Ajinkya Rahane and Nitish Rana overcame the early blow to guide KKR to 55/1 in the powerplay.

Umran Malik's three quick wickets in the middle saw Knights being reduced to 83/4 in 10 overs. Russell and Sam Billings rebuild KKR's innings with a 44-ball 63 run partnership for the sixth wicket. Bhuvi removed Billings in the penultimate over to break the stand and reduce KKR to 157/6 in 18.5 overs.

In reply, after impressing with the bat, Russell picked up the first SRH wicket, removing Williamson and reducing SRH to 30/1 in 5.2 overs.&nbsp;

Sunrisers struggled to build partnerships as Russell led the bowling attack with a scintillating three-wicket haul. Restricting SRH to 123/8, KKR picked up their sixth win of the season.