Lucknow Super Giants fell to their second consecutive loss as Rajasthan Royals handed the newcomers a 24-run loss at the Brabourne Stadium on Sunday. 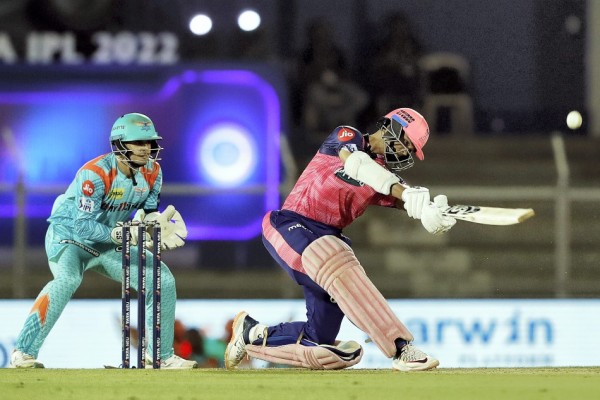 With the playoffs race heating up, Royals collected two crucial points to reach 16, with a game in hand.&nbsp;

After opting to bat first, Rajasthan Royals put up a strong total of 178/6 in 20 overs. Yashasvi Jaiswal set the Royals up for a defendable target with a solid 41 off 29. Skipper Sanju Samson and Devdutt Padikkal played solid knocks to guide RR.

In reply, Lucknow struggled to get going with the bat. Despite a fourth wicket stand of 65 off 46, between Deepak Hooda and Krunal Pandya, Lucknow failed to chase down the target. The Royals bowlers restricted LSG to 154/8 to pick up their eighth win of the season and keep their playoffs race alive.

For Royals Trent Boult, Prasidh Krishna and Obed McCoy pocketed two wickets each, while Yuzvendra Chahal and R Ashwin picked up one each.

Earlier, Yashasvi Jaiswal top-scored for the Royals, while Devdutt Padikkal and skipper Sanju Samson played important knocks to guide Rajasthan to 178 for six.

After opting to bat first, Royals lost Jos Buttler early. But the big blow was only a minor bump, as the young Jaiswal shouldered the responsibility to pile the runs for the Royals.

Royals overcame the early wicket as as skipper Sanju Samson and Jaiswal stitched together a second wicket stand of 64 off 40. Jaiswal, who was dropped by Mohsin Khan off an Avesh Khan delivery on 13, capitalised on the lineline handed to him as he scored a quickfire 34 off 19 in the powerplay. For Lucknow, Ravi Bishnoi was the most successful bowler as he picked up two wickets.