Dubai, Oct 24: A supremely stylish Babar Azam broke a 29-year-old jinx by guiding Pakistan to an emphatic 10-wicket victory over India in the ICC T20 World Cup here on Sunday (October 24), their first in 13 attempts against the bitter arch-rivals at a global event.

The law of averages had to catch up with India sooner or later after having won seven ODI and five T20 World Cup games since they first met at Sydney in 1992.

It was also a day when Virat Kohli scored a half-century but was pale in comparison to Babar (68 not out off 52 balls), who looked regal in attack, elegant in defence and composed in a chase of 152, which was achieved in 17.5 overs. 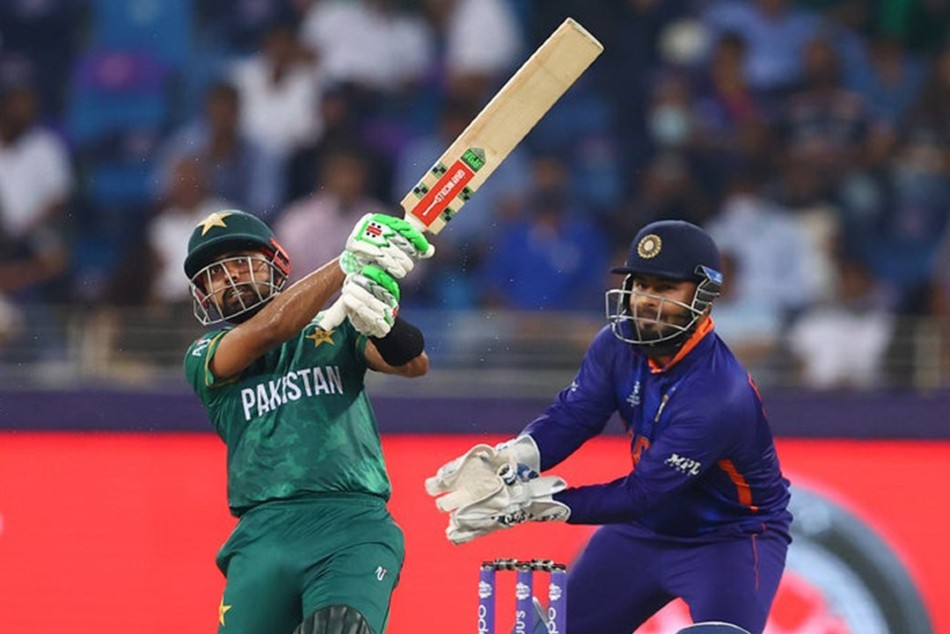 Worse, India haven't ever lost a T20 International by 10 wickets and Pakistan won by such a margin for the first time, and what an occasion to achieve the feat. Babar had the exuberance of Mohammed Rizwan (79 not out off 55 balls) to match his cool quotient as Pakistan, not for once during the entire match, looked like imploding.

In between them, they hit 12 boundaries and five sixes to make it a 'Super Sunday' for Pakistan. On the day, there was only one team that could have won and that was Pakistan, who were better on a man-to-man comparison with each Indian player.

It started with the captains. On a track where Kohli struggled, Babar just effortlessly found the gaps and when required, hit those sixes as release shots. If India lost three wickets in the powerplay, Pakistan literally humiliated their rivals with an opening stand, which will be billed as one of the best in this format for years to come.

If Shaheen Shah Afridi was a rockstar with his searing pace and incisive swing, his new-ball counterpart Bhuvneshwar Kumar bowled at early to mid 120 kmph with no swing at all.

If there was one team that felt the pressure it was India as Babar seemed like a man who was sitting in that Indian dressing room that had no control over the proceedings. In the chase, Pakistan looked in complete control and Bhuvneshwar's lack of pace and non-existent swing made it easy for Rizwan to effortlessly cart him over square leg for a six.

Skipper Babar was also elegant as he punched Mohammed Shami off the back-foot and rocked back to pull Jadeja over deep mid-wicket for a six. The 50 came in the 8th over and before India realised, the duo had taken the game away by posting the highest ever opening stand against India in T20 internationals.

When India batted, Kohli got support from Rishabh Pant (39 off 30 balls) during a 53-run stand but had to do the bulk of heavy lifting in a pressure cooker scenario, something he has been accustomed to for the past one decade. His innings had five fours and a six as India managed a score which gave the bowlers at least something to fight for on a track that can't exactly be called batting-friendly.

Shaheen, one of the most exciting fast bowlers produced two unplayable deliveries at the biggest stage under pressure, which any batter would have found difficult to negotiate.

The most difficult delivery from a left-arm fast bowler is the one that holds the line just when the batter had committed for the angle. In the case of Rohit (0), before he could adjust his footwork, he got one that was pitched on the block hole and straightened. It caught him plumb in front.

KL Rahul (3) thought that the ball will straighten but it shaped in to breach his defence and disturb the off-stump. Suryakumar Yadav (11) did get a six over backward square leg off Shaheen and a boundary off Imad Wasim (0/10 in 2 overs) but Hasan Ali bowled one back of the length which he edged while trying to cut and a diving Mohammed Rizwan behind the stumps pouched it.

Pant joined Kohli as the powerplay score read a disastrous 36 for three. They added 53 runs in 6.4 overs to get some momentum back in an exciting stand dominated by the left-hander.

The Indian captain did show Shaheen, who is the boss as he made room by shuffling towards leg-stump and lofted him straight into his team's dug-out for a six. For Hasan Ali, he reserved an exquisite square drive before he let Pant take over the show, having partially stabilised the initial rot.

Watching that there is a fielder placed at '45', Pant first played a lap shot off leg-spinner Shadab Khan (1/22 in 4 overs) and then back-cut Mohammed Hafeez from the middle-stump to get two boundaries. But the real fun was when he smoked Hasan for two one-handed sixes.

Shadab had the last laugh as a mistimed slog sweep turned into a return catch. Kohli, who was playing the second fiddle then took centre stage as he attacked Hasan with a pull-shot and then played a cover drive as 10 runs came off the 16th over.

However, Pakistani bowlers didn't err much at the death to keep the score under check, credit for which should go to Harris Rauf (1/25 off 4 overs).