Mumbai, May 26: Senior India cricketer Rohit Sharma is focussing on his fitness in the self-isolation at home as the lockdown due to the novel coronavirus pandemic continues to extend. The vice-captain of India's limited-overs squad is trying to keep himself in shape so that he's ready when the time comes.

The 33-year-old cricketer has posted a video on his Instagram handle and once again trolled his fellow India teammate Yuzvendra Chahal. Rohit and Chahal are good friends and the Mumbaikar gave an honourable mention to the Haryana spinner in the video.

"That's my little boy Chahal when he is fielding (jumping all around) @yuzi_chahal23," Rohit captioned the workout video.

Rohit's hilarious post tickled the funny bones of several cricketers like Harbhajan Singh and Herschelle Gibbs. Gibbs even tagged the wrist-spinner in the comments section after bursting into laughter.

Earlier, while chatting with his Mumbai Indians teammate Jasprit Bumrah, Rohit mocked Chahal for making his father dance in the TikTok videos. 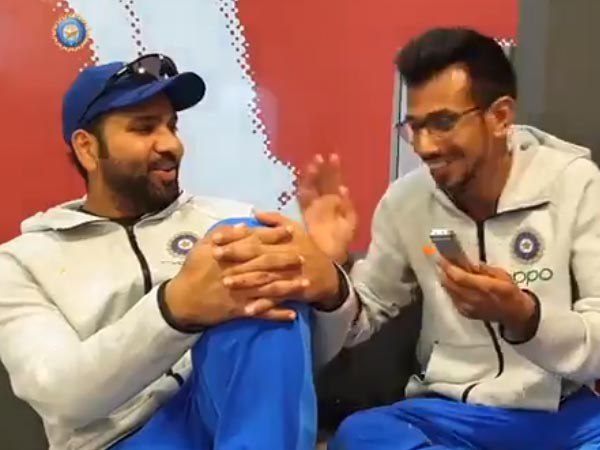 Rohit Sharma missing his teammates, reveals the first thing he'll do once lockdown is lifted

Earlier last week, Rohit interacted with presenter Joe Morrison on the official Facebook handle of La Liga during a live chat and revealed how badly he's missing his cricketer friends. The stylish right-handed batsman also said that he's enjoying the break with his family.

When asked what he's looking forward to the most and the kind of camaraderie with his teammates, the right-handed batsman said, "Yes, I miss that although we as friends are trying to stay in touch through the video calls and video conference calls to see what's one been up to, things like that. and we manage that pretty well. Yes, I miss my teammates, hanging around with them (and) also have some banter here and there because when you are playing together, we are playing or travelling together. So it's like a family with all these guys. So the first thing I want to do is to catch up with all these guys and try to hit some balls as soon as I can."