New Delhi, Oct 4: Parvez Rasool stood thunderstruck when Umran Malik tormented the KKR batsmen on his IPL debut with his sheer pace, clocking 150kmph on speedometer and Jammu & Kashmir's original cricket icon is confident that the 21-year old is a derby race horse. 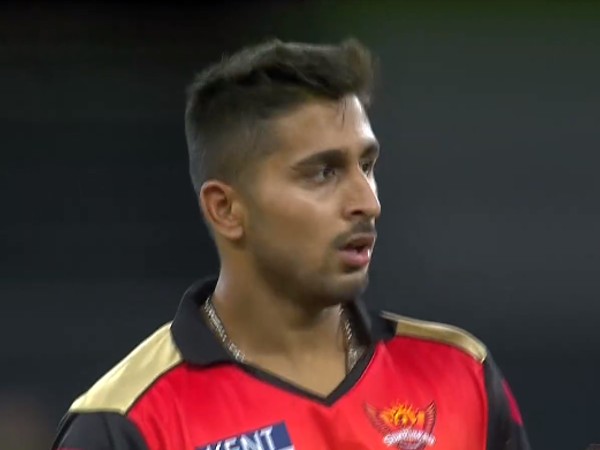 Numbers can be deceptive but Rasool, the only cricketer for the region to have played international cricket, has a good eye for talent and even he was stunned at the improvement shown by the 21-year-old Jammu boy.

For many, Umran's IPL debut against KKR on Sunday may get a slot in Ripley's 'Believe it or Not' as he clocked 151.03 kmph (93.84 mph), the fastest delivery by an Indian this season.

Also, 11 out of his 24 legitimate deliveries were above 145 kmph (90mph) as Sunrisers Hyderabad handed him IPL debut.

"He is very talented boy. When I played him in the nets, he was quick. Woh bahot teekha thaa (he was pretty fast) but this was at a different level," Rasool, the Jammu and Kashmir captain, who has played white ball cricket for India, told PTI on Monday.

"He was literally hurrying the batters with sheer pace. I was very proud to see him hold his own at such a big stage."

Umran is not well-built like most fast bowlers but is sturdy. So, where does this pace come from? "Look, I don't think in his initial years, he had formal coaching before joining the coaching camp of District Sports Council. He used to play a lot of tennis ball matches on hire for Rs 500 or 1000.

"If you look at some of our best fast bowlers including Jasprit (Bumrah), they have all been tennis ball cricket products. The light weight of the tennis ball means that to generate pace, you need that extra effort. This kid developed strength and pace by playing tennis ball games that he would play in and around Jammu," Rasool reasoned.

Rasool didn't initially know Umran until he saw the boy accompany Abdul Samad (his teammate at SRH) to the Jammu and Kashmir nets. "He is very close to Samad. It was Samad who got him to the state team nets. I think when he was at the U-19 level, he had a bit of consistency issues and that's why I don't think he played a lot of games at the Cooch Behar or Vijay Merchant Trophy," Rasool recalled.

"However even then, he was very quick for an 18-year-old and would bowl in mid 140s regularly. Facing him in the nets wasn't an easy job.

"However he was picked last season for the trial games where he troubled some of our top state team batters and we included him for the Mushtaq Ali Trophy," Rasool said.

On his T20 debut, he picked up 3/24 against Railways which included the wicket of former India player Karn Sharma, who was beaten for sheer pace. Rasool believes that the fire in him comes from the fact that he hails from a very humble background. His father owns a small fruit shop in Jammu's Gujjar Nagar area.

"His family has had their share of financial struggles and obviously that spurred him to do well. But I would give a lot of credit to Sunrisers Hyderabad management which included him as a net bowler and has certainly worked on his raw talent which shone through on IPL debut.

"He has certainly increased a yard or two of pace and that is SRH's coaching staff's credit," Rasool observed.

Sunrisers skipper Kane Williamson called Umran a "silver lining" and it was only possible to give him opportunity because they are already out of contention.

"Umran is a special talent, one of the silver linings of where we are, which is certainly not desirable but we have been able to expose a number of younger players. Talent in India is immense, so many young guys are ready to go. It was great that Umran was able to get an opportunity tonight," said Williamson after the IPL match.

Rasool feels that Umran is far from a finished product and needs to play a lot more matches in domestic cricket as he has the potential to become a big asset for any team that he plays.

"He bowls at 150 clicks and if he can consistently get one swing (inswing or outswing) going his way at that pace, batters will not be able to handle him. He has now played just three games at this level and once he plays Ranji Trophy, he will get even better. The more match situations he faces, the better match awareness he will possess," opined Rasool.

"In the end, we need such cricketers playing for Jammu and Kashmir. He will be an automatic selection for Ranji Trophy this season and it would be good to see him play the red ball cricket," he added.