Southampton, June 23: India had a disastrous start in the morning session of the reserve day of the ICC World Test Championship (WTC) against New Zealand as they lost the important wickets of Virat Kohli and Cheteshwar Pujara early on Wednesday (June 23).

India resumed innings from 64/2, with Kohli and Pujara resuming batting from their overnight scores. Team India, as well as fans, were hoping for a big partnership from the duo but their hopes were dashed as Kyle Jamieson had other ideas.

The tall pacer first dismissed Kohli for 13 as he got the Indian captain caught behind by wicketkeeper BJ Watling. India's scorecard read 71 when Kohli was dismissed and soon Pujara joined him in the dressing room. Pujara was also dismissed by in-form Jamieson in his very next over. 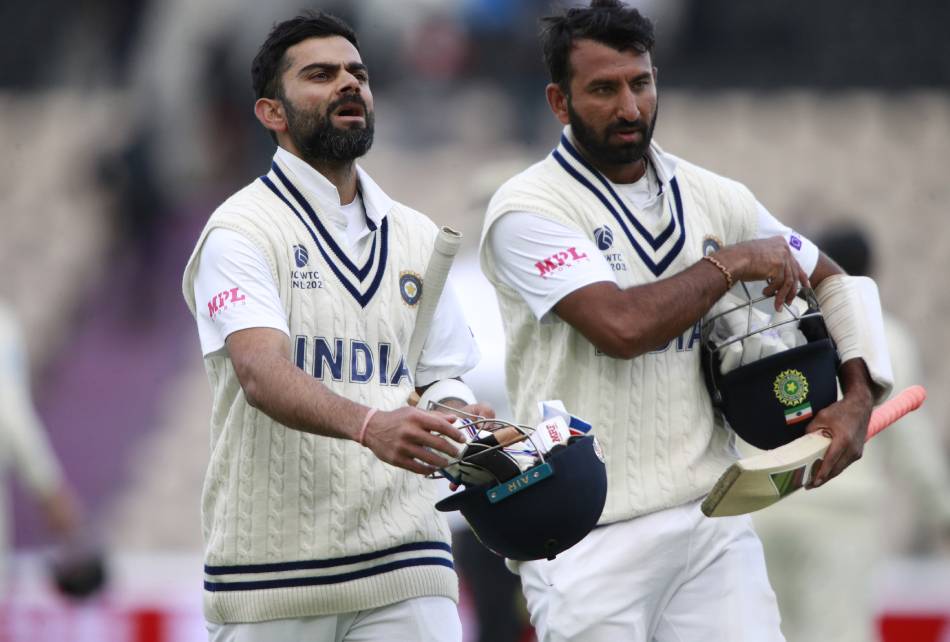 WTC Final: All you need to know: Over calculation, extension of play on Reserve Day

The Rajkot batsman - who failed to impress in the first innings as well - was surprised by the bounce from Jamieson and found an edge from his bat and the ball was pouched comfortably by Ross Taylor at slip. Pujara scored just 15 before he was dismissed and left India reeling at 72 for 4.

Both Kohli and Pujara were brilliantly set up by Jamieson and both the batters had soft dismissals and that dented India's prospects badly.

Later, vice-captain Ajinkya Rahane too was dismissed for 15 when he was caught behind the leg side by Watling off Trent Boult. Rahane disappointed with his soft dismissals.

Meanwhile, Rishabh Pant - who was given a breather at slip by Southee - scored 28* and Ravindra Jadeja 12* prevented fall on any wickets further in the morning session. At lunch break, India reached 130/5 and took a lead of 98 runs.

On a day that saw 10 wickets fell in all, Indians were hoping for another solid opening stand from the duo but Southee had other ideas as the right-arm speedster dismissed both the openers to keep his team in the game. Gill was dismissed pretty early in the innings when he was trapped plumb in front by Southee for 8.

At stumps, India were 64 for 2 in 30 overs and took a lead of 32 runs but the loss of Rohit after the right-handed opener laboured through most of the session and scored 30 before getting LBW by Southee.