The right-handed batsman walked in the middle when India were nine down as New Zealand all-rounder Kyle Jamieson gave the Indians blows off successive deliveries. Jamieson dismissed Ishant Sharma and Jasprit Bumrah off consecutive deliveries and was on a hat-trick. 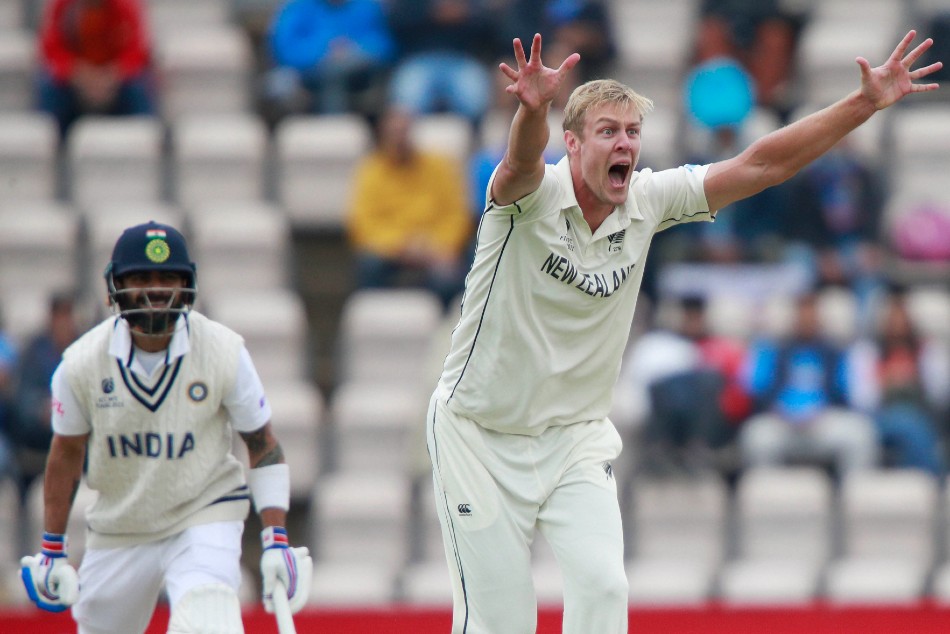 With Shami, a bowler primarily, taking guard the BlackCaps' medium-pacer looked to claim a hat-trick to make his fifth five-wicket haul in Test cricket sweeter. But what transpired on the very next ball surprised all as Shami played a classical cover drive off the tall Kiwi pacer and got a boundary.

Kyle jaminson- I take wickets of Rohit, Kohli and pant and I am on a hat-trick
SHAMI- pic.twitter.com/DVARhHi3RY

Jamieson breathing fire by taking back to back wickets
Shami with his gorgeous drive: pic.twitter.com/J5DyohPudp

Jamieson running in for a hat-trick after picking his 5th wicket.

And the tailender smacks a glorious boundary to the covers!!

Meanwhile, Ravindra Jadeja was the last man to be dismissed for 15 as India were all out for 217 in the match. Kyle Jamieson was the pick of the New Zealand pacers, taking his fifth five-wicket haul including the prized one of India skipper Virat Kohli, who could not add to his overnight 44.

India were bowled out in the 93rd over shortly after lunch. India lost four wickets in the morning session to take lunch at 211 for seven ay. Ajinkya Rahane (49 off 117) was playing well until he threw his wicket away with a half-hearted pull off Neil Wagner.

The dangerous Rishabh Pant (4 off 22) did not last long, falling to a loose drive off Jamieson with Tom Latham taking a brilliant catch in the slips. R Ashwin scored a valuable 22 off 27 in difficult conditions. India had resumed the day at 146 for three.