Dhaka, May 15: Bengaluru FC will hope for the rub of the green to go their way at more than one venue on Wednesday (May 16), when they take on Abahani Limited Dhaka at the Bangabandhu National Stadium in Bangladesh in their final Group E game of the 2018 AFC Cup. 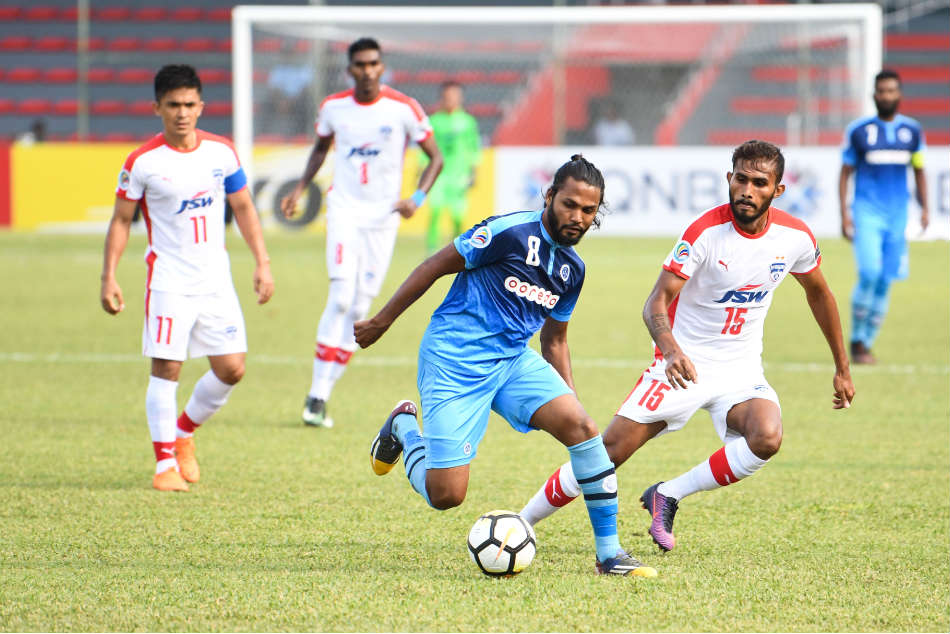 Albert Roca's men need a win while hoping Aizawl FC claim a point or more against New Radiant SC in Group E's other fixture, if they are to stand a chance of qualifying for knockout stages of the Cup for a fourth successive year. Meanwhile, the Maldivian side simply need to match Bengaluru FC's result, as a better goal difference in the head-to-head comparison between the two sides will pull New Radiant through.

AR: We had one bad game in the Maldives and that has put us back. But it's reality we must accept. We must do everything to win this game. #ALDvBEN

"It's true that we are in a position where a win may not be enough to qualify, but it has been made clear to the players that we have to remain focused on the task ahead. We cannot take Abahani (Limited Dhaka) lightly, as they are a team with some good players and we have seen that in our travels here before," said Roca, speaking to the press on the eve of the clash.

Bengaluru's only previous visit to Dhaka ended in defeat to the Bangladeshi side in the group stages of last year's AFC Cup campaign with late goals from Saad Uddin and Rubel Miya handing Roca's men a 2-0 loss. In a more recent meeting between the sides, Daniel Lalhlimpuia scored a 72nd minute winner at the Sree Kanteerava Stadium in March as the Blues began their continental campaign.

The Blues will be looking for a first win in Bangladesh when they take on Abahani Dhaka in their final game of the season tomorrow. #ALDvBEN #BluesInAsia 🔵 pic.twitter.com/qMPcRMD5io

The Saiful Bari Titu-coached Abahani side are out of contention for the knockout stages and have won just one of their five games so far this campaign, a 3-0 away victory in Aizawl - their only win across all competitions in the last four months - but Roca believes there is no room for complacency.

"We have always had close games against Abahani Dhaka as they are difficult to break down and play a different style of football. The conditions in Bangladesh are also quite different from what we are used to, so we will have to be wary if we are to do well and take anything away from this game," the Spaniard said.

Bengaluru were dealt a late blow when winger Boithang Haokip suffered an injury that kept him out of the traveling squad while right-back Nishu Kumar has joined the team from Kolkata, where he was in action with the club's reserve squad against Mohammedan Sporting in the 2nd Division I-League. Meanwhile, Abahani will be missing the services of midfielder Mohammad Fahad, along with the Nigerian duo of attacker Sunday Chizoba and defender Ndukaku Alison, who are all suspended.

The game in Dhaka kicks off at 6.45 pm IST and can be streamed live on the AFC Cup Facebook page.