Chelsea 2-1 Tottenham: Giroud and Alonso on target in first win in five

By Ben Spratt
Updated: Saturday, February 22, 2020, 20:10 [IST]
omnisport-MyKhel Team
Olivier Giroud returned to the starting XI and the scoresheet in the nick of time for Chelsea, inspiring a precious win against Tottenham.

London, February 22: Chelsea reinforced their grip on fourth place in the Premier League with a much-needed 2-1 win over rivals Tottenham as Olivier Giroud scored his first club goal since August.

Frank Lampard's men were four without a win in the top flight coming into this clash at Stamford Bridge and had seen their advantage over Spurs cut to just a point in the battle for the Champions League places.

But former manager Jose Mourinho could not inflict a further setback on the Blues, as Giroud, who had a goal disallowed against Manchester United on Monday, made the most of his first league start of 2020.

Marcos Alonso - another of four Chelsea changes - brilliantly doubled his side's lead shortly after half-time, and Lampard's side held on despite a luckless late own goal from Antonio Rudiger.

In a rare Tottenham opening, Lucas Moura's low drive drew a sharp stop from Willy Caballero after 10 minutes, and the game sparked into life as Hugo Lloris saved at his near post from Mason Mount.

The visiting goalkeeper's best efforts could not prevent a 15th-minute opener, although he did block Giroud's initial strike with his foot after a glorious Jorginho pass from deep.

Ross Barkley hammered the rebound against the post, only for the ball to land again at Giroud's feet, and the second finish from the France forward was arrowed into the bottom-right corner. 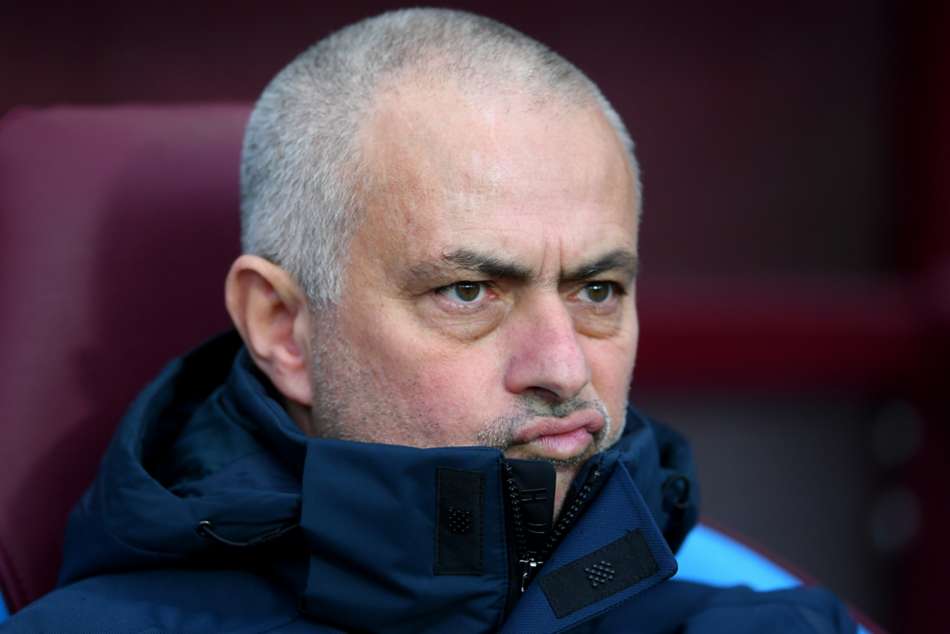 Mourinho: Chelsea favourites for top four ahead of London derby

Alonso sent a 20-yard volley fizzing just over, but Spurs threatened again late in a lively first half, with Caballero turning away a Davinson Sanchez header and then seeing Japhet Tanganga overrun the ball as he rounded the keeper.

Chelsea were back on top from the restart, and the second goal came less than three minutes later as Alonso thundered low past Lloris after an incisive team move.

Lloris parried a swirling Barkley strike over the crossbar, before Tottenham were fortunate to avoid another blow when Giovani Lo Celso planted his studs into Cesar Azpilicueta's shin in a late challenge that did not prompt a card.

The fit-again Tammy Abraham appeared from the bench and would have scored but for a close-range Lloris stop, while Alonso hit the bar with a wonderful free-kick.

Rudiger inadvertently deflected a cross from Erik Lamela beyond Caballero with a minute remaining to give Spurs late hope, but Chelsea saw out a deserved win.

What does it mean? Chelsea back in charge

Chelsea's season was just threatening to fall apart after Monday's defeat to United, with a host of sides now hot on their heels in pursuit of Champions League football. But the Blues are not the only club dealing with some difficulties this term, and Tottenham - missing Harry Kane and Son Heung-min - were largely blunt at the Bridge, allowing their rivals to restore a healthy gap.

Perhaps with one eye on Champions League business in midweek, Lampard started with Willian and the returning Abraham on the bench while making four changes. But the quartet to come in took their opportunities with both hands, Giroud scoring the first before he, Mount, Barkley and Alonso all combined for Chelsea's second.

In the VAR era, it is quite remarkable that officials spent several minutes assessing Lo Celso's challenge on Azpilicueta and decided not to show the Tottenham midfielder a red card. Lo Celso miscontrolled with his first touch and then made contact with his opponent long after the ball was gone. Lampard was understandably furious.

Tottenham were in Champions League action on Wednesday, and it is Chelsea's turn this coming Tuesday, hosting Bayern Munich in a last-16 first leg. The Blues then visit Bournemouth next Saturday, before Spurs welcome Wolves the following day.