Bengaluru, August 3: Goa was the final stop of the Trophy Tour for the 131st edition of the historic Durand Cup football tournament.

As per information received via a media release, the Trophy Tour was flagged off from Kolkata on July 19, travelling to Guwahati, Imphal and Jaipur before arriving in Goa.

After a two-day tour in Goa, the trophies return to Kolkata, the venue of the final.

Post the unveiling, the Trophies were put on display at the Bambolim camp of the Indian Army and an exhibition football game was also played at the FC Goa Club ground in the Salvador do Mundo Panchayat.

The three Trophies, the Durand Cup (a rolling trophy and the original prize), the Shimla Trophy (also a rolling trophy and first given by the residents of Shimla in 1904) and the President's Cup (for permanent keep and first presented by Dr Rajendra Prasad, India's first President, in 1956) continue their tour of Goa on August 3, with Trophy displays planned at the Dhempe College in Miramar, the MES College in Vasco, at the INS Hansa, the Panjim Church as well as the Mall de Goa in Porvorim.

They are then set to return to Kolkata on August 4.

Durand Cup 2022, which is the 131st edition of the prestigious tournament, is scheduled from August 16 to September 18, with the first game to be played between defending champions Goa and the runner-up from last year, Mohammedan Sporting Club. 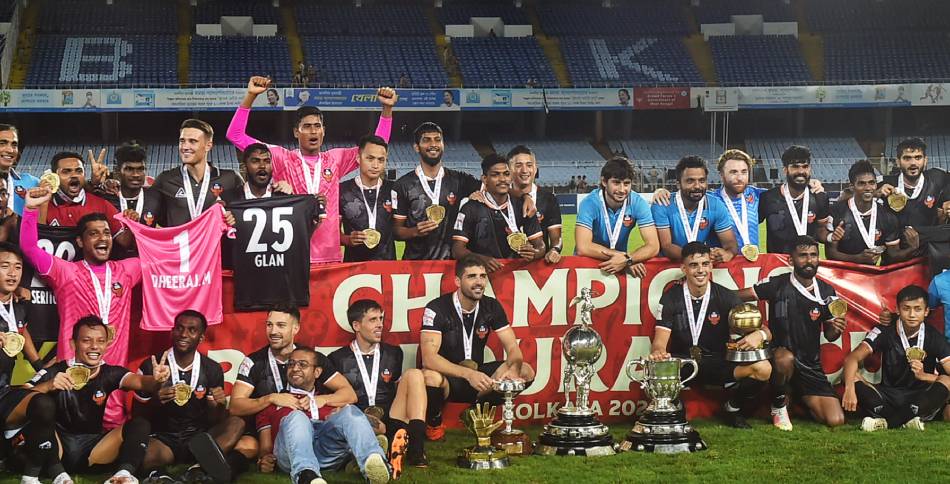 In the Durand Cup 2021 finals played at the Vivekananda Yuva Bharati Krirangan (VYBK) on October 3, Edu Bedia's 105th-minute strike helped the Men in Orange overcome the challenge posed by Kolkata-based Mohammedan to lay their hands on the trophy for the first time ever.

This year, the Durand Cup has grown to 20 teams from 16 last year and all 11 teams of the Indian Super League (ISL) have confirmed participation. Five teams from the I League and four Services teams will also be vying for the coveted honours.

There will be a total of 47 games in the Durand Cup this year, with West Bengal hosting Group A and Group B matches, while Imphal and Guwahati will host Group C and Group D games respectively.

All the seven knockout games will be held across the three venues in West Bengal.

A symbol of India's football history and culture, the Durand Cup is Asia's oldest and the world's third oldest football tournament, held between 20 top Indian football clubs across divisions.

Organized by the Indian Armed Forces, the Durand Cup has been the breeding ground for India's best footballing talent, over the years.

The inaugural edition happened in Shimla in 1888, when it started off as an Army Cup, open only to the British Indian Army troops in India, but soon opened up to civilian teams.