Abu Dhabi, December 27: The Blue Tigers held mighty Oman to a goalless draw in an International Friendly at the Baniyas Stadium in Abu Dhabi on Thursday (December 27).

The match which was part of the Indian National Team’s preparation for the forthcoming AFC Asian Cup UAE 2019, was played behind closed doors.

The last two matches against Oman in the FIFA World Cup Russia 2018 Qualifiers had ended in favour of Oman by a 2-1 and 0-3 margin. 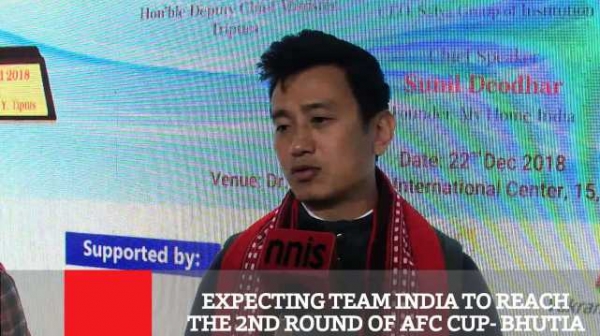 Expecting Team India To Reach The 2nd Round Of Afc Cup: Bhutia

India had their first opportunity in the 17th minute when skipper Sunil Chhetri won the ball at the top of the box, and volleyed it only to see it sailing over the crossbar.

Meanwhile, the Indian defenders had a task on their hands and they took the challenge head-on. The two central defenders Sandesh Jhingan and Anas Edathodika kept the attacks on check, with Subhasish Bose and Pritam Kotal playing the supporting role to perfection.

💯 marks to India for their 👌🏻 display against @OmanFA

In the 28th minute, Amrinder Singh, who started ahead of Gurpreet Singh Sandhu, pulled off a terrific save to deny Oman from surging into the lead.

Halicharan Narzary and Udanta Singh did try to stretch it wide and gel well with Sunil Chhetri and Jeje Lalpekhlua. But the sturdy Omani defenders were not to be beaten as both teams headed to the changing room locked goalless.

Barely six minutes within coming in, Gurpreet came out with a stunning save to deny Oman for a corner, which was eventually headed out by Jhingan.

At the stroke of the hour-mark, India had their best chance to break the deadlock. Udanta ran past all but even as he crossed, it failed to find an onrushing Balwant. Off the rebound, Halicharan fired it from the edge of the box, but the rival goalkeeper was not much to be disturbed.

It was the winger's last action of the day as he was replaced two minutes later by youngster Ashique Kuruniyan.

In the 77th minute, Ashique outpaced his marker on the left wing to put a long ball for Balwant, whose lay-off landed on to Udanta's foot, but the latter failed to convert it from an acute angle.

In the next minute, Ashique’s stupendous run found Balwant but the striker’s header landed on the roof of the net.

India kick-off their Asian Cup campaign against Thailand at the Al Nahyan Stadium on January 6.