Bengaluru, November 28: Defending champions Mumbai City FC were dealt their first defeat of the season by Hyderabad FC in their Indian Super League (ISL) match at the Jawaharlal Nehru Stadium in Fatorda, Goa on Saturday.

The Nizams came away 3-1 winners on the night with a brilliant comeback victory against the Islanders who scored early into the game.

Ahmed Jahouh (6') opened the scoring with a thumping right-footed finish after the HFC players failed to clear their lines inside the penalty area.

Joao Victor (13') brought the game level by converting a penalty with calmness. HFC went into the lead with Bartholomew Ogbeche (53') scoring his first goal of the season against his former team.

Mumbai City FC made one change to their starting lineup as Mohammad Rakip came in for the injured Vignesh Dakshinamurthy. On the other hand, Hyderabad FC made two changes to the team by bringing in Joel Chianese and Aniket Jadhav, while Edu Garcia and injured Halicharan Narzary lost their place in the starting lineup.

The Islanders started all guns blazing with Jahouh scoring from the first shot on target thanks to some shoddy defending from the opposition. However, the Nizams came right back into the game after Bipin Singh fouled Joel Chianese inside the penalty area. 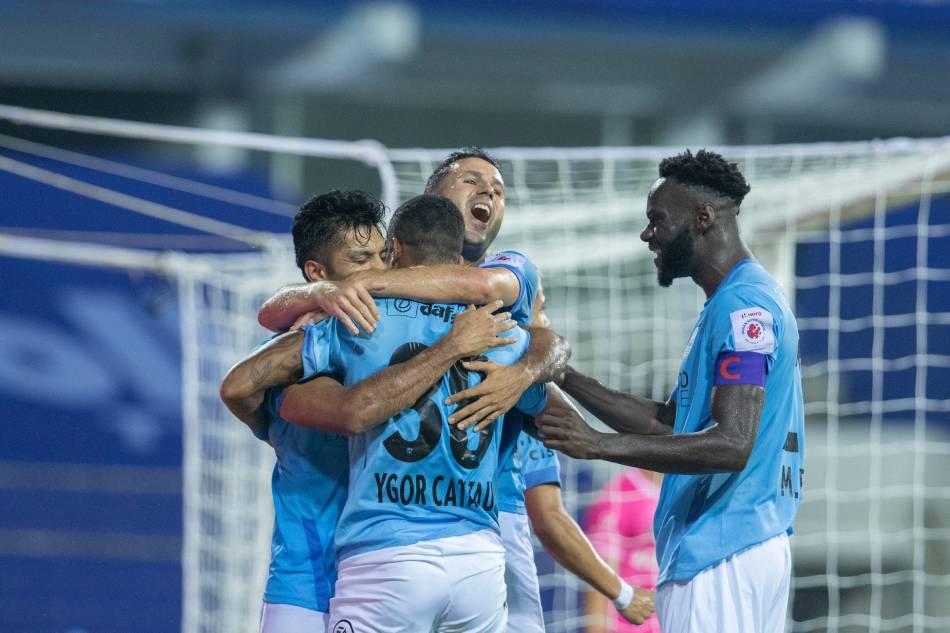 Skipper Joao Victor made no mistake with the penalty and rifled it in the back of the net despite Nawaz correctly guessing the ball. The custodian made an important save from Asish Rai a few minutes later to prevent HFC from going into the lead. Rahul Bheke had a great chance to score in the 27th minute but his attempt from close-range went wayward. Teams went into the halftime break on level terms.

Hitesh Sharma was the first player to be booked after committing a foul on Apuia post the restart. Chinglensana Singh also picked up a yellow shortly after. Bartholomew Ogbeche then scored HFC's second goal from close range after a brilliant build-up play from the side, eight minutes into the second half. Jahouh also received a caution for a poor challenge minutes later.

In a series of changes by both camps, Des Buckingham sent Ygor Catatu from the bench who replaced Cassio Gabriel on the hour mark. Following suit, Manolo Marquez changed Rohit Danu for debutant Aniket Jadhav and Edu Garcia for Chianese. Rowlin Borges also came on by replacing Raynier Fernandes and almost scored the equaliser in the 78th minute.

Rohit Danu then scored HFC's third with a powerful close-range right-footed shot after pouncing on a second ball. This was Danu's first goal in the Hero ISL and he repaid the faith shown in him by the gaffer. Catatau was shown a yellow card for a high-boot late into the contest after frustration had set in.

HFC held a good shape for the remainder of the game and secured their first win of the season. Interestingly, this was also their first-ever victory over MCFC.

Mumbai City FC will next face ATK Mohun Bagan on Wednesday while Hyderabad FC is up against Jamshedpur FC on Thursday.

(With inputs from ISL Media)