Berlin, March 29: Brazil laid down a marker ahead of the World Cup as they ended defending champions Germany's 22-game undefeated streak with a 1-0 friendly win at the Olympiastadion in Berlin while Isco struck his first international hat-trick as Spain extended coach Julen Lopetegui's unbeaten run to 18 matches with a supreme 6-1 demolition of Argentina in Madrid.

In the other key matches, Lorenzo Insigne converted a controversial penalty in the closing stages as Italy left it late to secure a 1-1 draw against England at Wembley, Romelu Lukaku scored twice as Belgium breezed to a 4-0 friendly win over Saudi Arabia in Brussels and Piotr Zielinski's stunning strike secured a memorable victory for Poland, as Adam Nawalka's side saw off a late comeback from South Korea to claim a 3-2 win.

Meanwhile, Colombia failed to follow-up their impressive victory over France with another win as Miguel Borja missed a late penalty and a glut of chances in a 0-0 draw against Australia. 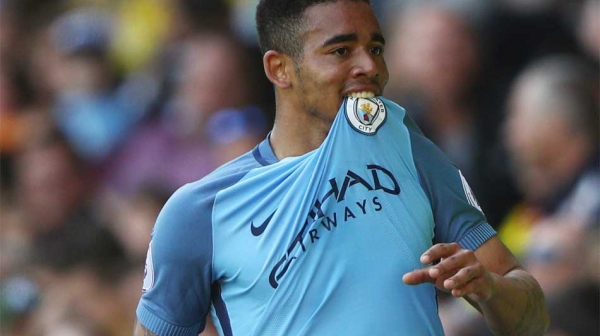 We win because we deserve to win - Jesus

The Germany vs Brazil game marked the first senior meeting between the heavyweights since a remarkable World Cup semi-final in 2014 when Germany thumped the stunned hosts Brazil 7-1 in Belo Horizonte.

While the result will not erase the humiliation of one of Brazilian football's darkest nights, the nature of their performance suggests they are approaching their best as they look to land a sixth World Cup.

Just as they were in that clash at the Mineirao, the Selecao were without the injured Neymar on Tuesday. However, they now possess another superstar in Manchester City striker Gabriel Jesus and he powered a header past the floundering Kevin Trapp as the visitors cranked up the pressure shortly before the interval.

Paulinho, Philippe Coutinho and Jesus all squandered opportunities to double down on their dominance in the second period, with Germany looking a shadow of the side that won their World Cup qualifying group with a 100 per cent record.

After seeing his side lose for the first time since a Euro 2016 semifinal against France, Joachim Loew will see friendlies against Austria and Saudi Arabia in June as opportunities to return to winning ways ahead of their campaign in Russia.

Chances were at a premium during a cagey opening and when one did fall to Ilkay Gundogan after 17 minutes, the Manchester City midfielder could only blaze wildly over from Julian Draxler's cutback.

Mario Gomez clipped over from a tight angle after Leon Goretzka's cross caused problems for the visitors' defence, before Joshua Kimmich headed Marvin Plattenhardt's cross wide at the back post.

Brazil's heralded attack finally sparked into life nine minutes before the interval. Jesus inexplicably fired over, though, after breaking through a static German defence and shrugging off the back-tracking Antonio Rudiger and Jerome Boateng.

He made up for that miss within 60 seconds, however, meeting Willian's teasing cross with a powerful header that Trapp could only bundle into his own net.

Brazil started the second half with a spring in their step and twice came close to doubling their advantage in the same passage of play in the 55th minute.

Willian's initial goal-bound effort was blocked and fell invitingly at the feet of Paulinho, who unleashed a powerful drive that was turned behind by Trapp.

His Barcelona team-mate Coutinho crashed a shot just over the crossbar as Tite's men continued to take advantage of large pockets of space in the Germany backline.

Jesus really should have netted a second after 67 minutes, failing to turn home a back-post header after Trapp abandoned his goal attempting to claim a corner.

Boateng will have given Bayern Munich cause for concern ahead of their Champions League quarterfinal against Sevilla when he was replaced by Niklas Sule after appearing to injure his ankle.

The previously under-worked Allison tipped over Draxler's fierce drive in stoppage time to ensure Brazil held on for a memorable win.

Spain were pegged back by Germany for a 1-1 draw on Friday, but Argentina - without Lionel Messi due to injury - fared far worse than the reigning world champions.

Diego Costa put Spain in front, Marco Asensio then adding his second assist of the game by setting up Isco, although Nicolas Otamendi headed one back for Argentina before the break.

That proved a mere consolation for the visitors at the Wanda Metropolitano, though, with Isco on target again shortly after the restart to put Spain in total control.

The Real Madrid playmaker continued to build on an eye-catching individual performance by helping to tee up Thiago Alcantara for Spain's fine fourth, Lopetegui's side sending a warning shot ahead of the World Cup with a fifth via substitute Iago Aspas, who set up Isco to claim the match ball soon after.

In Wembley, Napoli forward Insigne fired past Jack Butland in the 87th minute after the use of VAR had seen debutant James Tarkowski punished for a challenge on Italy subsitute Federico Chiesa.

Jamie Vardy capitalised on some swift thinking by Jesse Lingard to fire the hosts ahead in the 26th minute, and it seemed one goal would be enough for Gareth Southgate's side.

After a foul on Raheem Sterling, Lingard spotted the opportunity to take a quick free-kick, putting the ball down and re-starting play in a hurry to tee up his compatriot's seventh international goal.

Yet Italy scored for the first time in four outings thanks to the help of technology, referee Deniz Aytekin spotting Tarkowski had stood on Chiesa's foot inside the penalty area after viewing replays.