Manchester, December 3: Pep Guardiola is taking nothing for granted as the Premier League leaders prepare to host West Ham, with Andy Carroll's power in the air a concern for the Manchester City manager.

City have won 12 Premier League games in a row to go clear at the top of the table, while West Ham are winless in five, David Moyes seeing his new side battered 4-0 on his return to Goodison Park on Wednesday (November 29).

Regardless of the huge difference in the form of the two teams, Guardiola is particularly wary of the threat posed by Carroll, with City again set to be without centre-back John Stones due to a hamstring injury for Sunday's game at the Etihad.

"Try to realise, with the way Carroll plays, it will be complicated," Guardiola told reporters. "I can imagine the game - defending like in the Huddersfield [Town] and Southampton games.

"A lot of long balls, balls in the box, and Carroll scores a goal. Carroll in the box is better than our central defenders. That can happen in football.

"One counter-attack, we miss [a tackle] and get a red card. You can lose the game. Everything happens normally and you have a chance to win the game - but we never know.

"That's why it's better to be calm and prepare as well as possible, because it's the same three points as against Manchester United. It counts the same and this is why it is better to be focused and in the future we can see what will happen."

With City set to play nine fixtures in all competitions during December and a crucial derby against United up next in the Premier League, Guardiola faces a challenge to keep all his players fresh and fit. 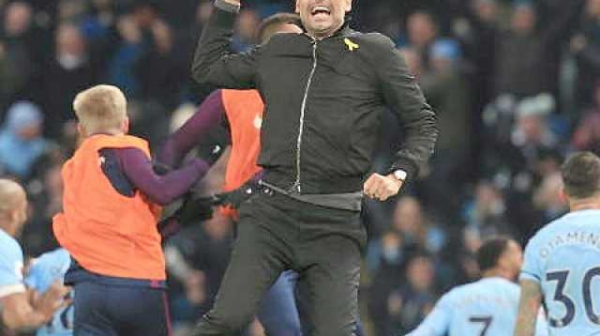 But Guardiola denied he sees West Ham as the ideal game in which to rest a host of regular starters, with a dead rubber in the Champions League against Shakhtar Donetsk to come on Wednesday (December 6).

"Don't say that word," Guardiola hit back when asked if West Ham would be 'easy' opponents. "This kind of thing happened a lot at Barcelona, people would ask me [about rotation].

"I'd talk about the opposition and people say 'Pep is false, he's a liar, he's saying something I don't believe'. I cannot deny we are in better form than West Ham and we've had better results than West Ham. We've won our last 12 games and we are better - we cannot deny that.

"But [Sunday] we have to start the game. I was a football player and I trust the professionalism of the players. They have experience and a manager with the experience to handle these situations.

"Why do I have to think it will be easy, or that [the result] is already done? I think it is ridiculous. We have to respect them and the best respect to them is to be serious and play as well as possible. And that's what we have done in this period.

"It has worked for me in the past. Even last season, a tough season, we never gave up and were able to win the last seven games in a row."