Bengaluru/Doha, July 20: Though the Qatar 2022 FIFA World Cup is still a good four-and-a-half years away, the country is leaving no stone unturned in its preparations for the biggest football show on earth.

Two more stadiums -- Al Wakrah and Al Bayt -- are expected to be complete by the end of this year and officially opened as early as in 2019.

Work is also well underway at the Lusail Stadium, where the 2022 FIFA World Cup's opening game and final will be played.

When these Qatar 2022 World Cup stadiums are built they’ll basically be just real life versions of those in the Supa Strikas comics, damn! pic.twitter.com/L1OnbZug0W

Construction across the capital city Doha is going as per schedule despite the ongoing diplomatic row. It may be recalled that the neighbouring Gulf Co-Operation Council (GCC) countries have snapped economic and political ties with Qatar since June 5, 2017, over the country's alleged support to terrorism.

FIFA President Gianni Infantino had recently said that the game's global governing body is ready to take a lead role in engaging the neigbours for talks, so as to end the crisis which has been dragging on for a while.

But so far nobody has responded to his clarion call.

At Russia 2018, FIFA Secretary General Fatma Samoura attended the Qatar 2022 promotional events in Gorky Park, Moscow, and got a taste of what is to come in four years' time when the tournament heads to Middle East for the first time.

It was our pleasure to welcome @FIFA Secretary General Fatma Samoura to Majlis Qatar in Moscow, where she learned more about our plans for #Qatar2022 and got a taste of the country’s heritage and culture. #seeyouin2022 pic.twitter.com/mVXIcqJxRL

"The journey to Qatar 2022 - and a unique version of the FIFA World Cup - has begun," Samoura told local organising committee's website.

"Majlis Qatar is a pavilion packed full of surprises and gives visitors an idea of the kind of welcome they can expect when Qatar hosts the first World Cup in the Arab world in a little over four years' time.

"Along with the other Moscow activations, including Qatar Elements and the Qatar @roadto2022 Exhibition, thousands of football fans are already thinking about their next World Cup journey," she added.

The Qatar 2022 FIFA World Cup which has been switched from the traditional June-July window to November-December due to the extreme summer temperatures in the Gulf region is expected to be one of the most compact tournaments.

There are so many reasons to look forward to #Qatar2022 😍#SeeYouIn2022 #WorldCup pic.twitter.com/Z8vPR2AVuB

The tiny gulf nation has a population of only 2.3 million people, of whom a majority are expatriates.

At the FIFA World Cup 2018, over 180 professionals appointed by Supreme Committee for Delivery and Legacy (SC) -- the local organising committee in charge of Qatar 2022 -- were in Russia, shadowing and observing the World Cup operation in the 11 host cities.

The 2022 World Cup to be held from November 21 to December 18 is in effect a one-city tournament, with the longest distance between venues just about 55 kilometres. 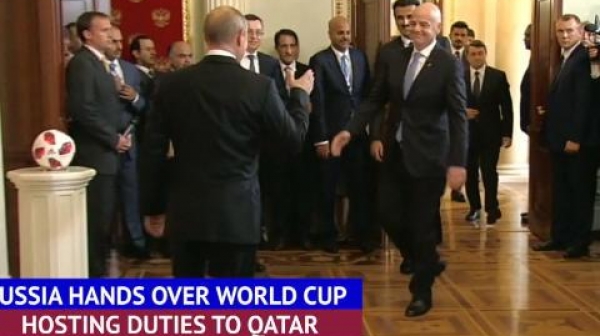 Despite the small size and lack of solid sports culture, the coutry's rulers are confident of delivering a standout tournament, something which Russia succeeded.

"We hope to overcome all the difficulties. Although it will be hard to repeat Russia 2018 success as we're a small country, we are very keen on sport," said Qatar's Emir Sheikh Tamim bin Hamad Al Thani during the handover ceremony in Kremlin last week.

Infantino himself gave a thumbs up to Qatar's preparations.

(With inputs from Agencies and Qatar 2022 organisers).