Bengaluru, Aug 1: The Indian men's hockey team inched closer to end the 41-year medal drought as they sealed a semifinal berth of the ongoing Tokyo Olympics with a 3-1 win over Great Britain at the Oi Hockey Stadium on Sunday. 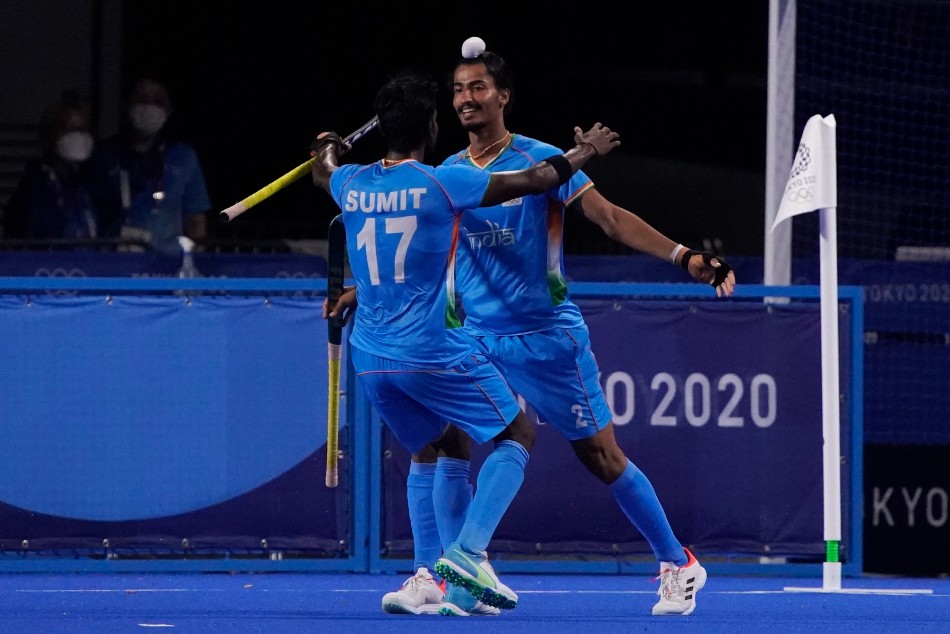 Tokyo 2020: Men's Hockey: India down Great Britain 3-1 to set up a semifinal clash with Belgium

The Indian men's side booked a last-four berth for the first time since winning gold in the 1980 Moscow Olympics. That was India's last medal in hockey at the Olympics. The Manpreet Singh-led side will now take on Belgium in the last-four stage. In the other semis Germany will take on Australia.

Following India's win, the country took to social media to laud India's show. Former India captain Viren Rasquinha took to Twitter and wrote, "Greatest moment for Indian Hockey since the 1980 Gold medal at the Moscow Olympics. I am just so proud of the team. Congrats boys. I have tears of joy in my eyes. Thank you for what you guys are doing at Tokyo Flag of IndiaFlag of IndiaFlag of India.

"To win an Olympic hockey QF, you need hunger, fire, desire and total teamwork. Our men's hockey team showed all that and then some more today vs GBR. Just so proud of our warriors. Now for Belgium. Recover and get ready for the SF. The whole nation will be watching & cheering.

"There is something about a team sport especially hockey that can truly unite a nation. I can feel the emotion and the love for hockey in Flag of India Everyone wants our hockey team to do well. Keep fighting boys. The tournament is not over. Stay focused," Rasquinha added.

Greatest moment for Indian Hockey since the 1980 Gold medal at the Moscow Olympics. I am just so proud of the team. Congrats boys. I have tears of joy in my eyes. Thank you for what you guys are doing at Tokyo 🇮🇳🇮🇳🇮🇳

#Hockey is an emotion in India. The past four decades have been filled with disappointments. Whatever the outcome of the semis, the perennial dark clouds seem to be lifting. Reason enough to rejoice

What resilience from this Indian hockey team to book a place in the semis. It's been a long wait for medal at the Games in hockey and this team has an entire nation backing them to end that wait. Come on! #TeamIndia #Tokyo2020

There can't be a better Sunday evening. Sindhu became the first Indian woman to clinch double-medals at the Olympics and the men's hockey team entered the semis after 41 years. History made in badminton and hoping history repeats in hockey.#Tokyo2020 pic.twitter.com/1RHEMmlqMf

Yay! Fantastic team effort by @TheHockeyIndia to win the quarter final match against GBR today. Wishing the team the best to win their first Hockey medal after 1980.
Onwards and upwards #Hockey #Tokyo2020 pic.twitter.com/i2HjyLHtFS

Congratulate Indian Men’s #Hockey Team on registering a stunning victory in the quarter-final against Great Britain at #Tokyo2020. May the team continue its momentum & bring much awaited medal for the country. Wish the team all the best.#Cheer4India @thehockeyindia pic.twitter.com/9eBkrlyxY1

Yes. Yes. What a fabulous last couple of hours. Now for a hockey medal. That will be so good

Well done Indian Hockey Team 🏑 on putting up a spectacular show of team work & commitment to reach the semi-finals.

We are all cheering for you. All the best for the upcoming matches, Chak De India. #Olympics #Hockey #Tokyo2020 pic.twitter.com/vNf6MohtI7