Women's Asia Cup: Golden Rani strikes at the death against China to win it for India

Kakamigahara (Japan), November 5: The Indian women's hockey team created history as they beat China in a tense shootout to lift the Women's Asia Cup 2017 after 13 years and qualify for next year's Women's World Cup as the continental champions here at Kakamigahara Kawasaki Stadium in Japan.

It was India skipper Rani Rampal who scored the winning goal for India while Savita made a great save in the sudden death to ensure India the 5-4 score in penalty shootout. Earlier, it was Navjot Kaur who scored India's lone goal in the 25th minute. Tiantian Luo struck in the fourth quarter for China. India had won the Asia Cup way back in 2004 when after beating Japan 1-0 in the final. The win comes two weeks after the men's team were crowned the Asian champions in Malaysia. 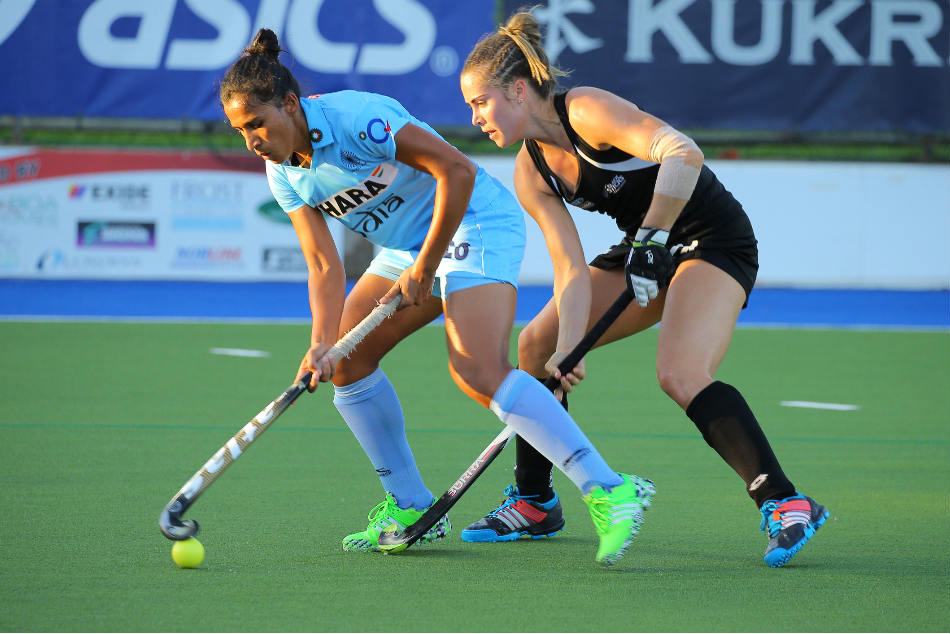 'Happy to qualify on merit'

It was advantage China right at the start as a stick check in the circle saw India concede a penalty corner in only the second minute of the game. However, Indian goalkeeper Savita was at her usual best to pad it away while an alert Deep Grace Ekka cleared the ball. Soon after, Indian forwards launched a swift attack with Navneet Kaur and Vandana Katariya working in tandem to find space in the Chinese D, but an attentive Wang Na averted the danger. China, meanwhile, won their second PC but Savita was spot on yet again to pad away Meiyu Liang's flick.

With the first quarter ending in a stalemate, India came back looking determined to find a breakthrough. The Indian forwards kept the pressure on China as they made brave forays into the striking circle. Navjot Kaur came close to converting a field goal in the 17th minute but her diving effort was blocked even as skipper Rani made a quick attempt to find a deflection. It was not until the 25th minute when India found its first breakthrough when Navneet Kaur and Rani played give-and-take before penetrating the circle only to assist Navjot who took a clear shot on goal. It was a much-needed 1-0 lead for India. Though China launched a counter attack soon after, Indian defenders were up to the task in denying success.

India began the third quarter rather positively as they stayed persistent with an aggressive attack. They dominated the ball possession with accurate passing, rotating the ball and testing China's patience. Neha Goyal and Lilima Minz showcased good dribbling skills to steer past Chinese defenders, but a second goal was not to come by even as the clock ticked away to the third hooter. On China's part, they stayed disciplined in their defence to deny India a chance to score through a PC.

The final quarter was tense as China won a PC through successful video referral in the 47th minute. Tiantian Luo kept low as she improvised from the injection to find the right corner of the post, scoring a sensational equalizer for China. The following minutes saw both teams play on par with each other not allowing either of them to stay in control. With nine minutes left for the final hooter, India upped their attack desperately attempting to find a gap in the 15-yard mark but Chinese defenders were resolute not allowing any room for error.

Congratulations to the women's hockey team on winning #AsiaCup2017! Way to go!!

Meanwhile China won their fourth PC of the match with little less than three minutes to go for the final whistle. But it was brilliantly saved by rusher Sunita Lakra and almost immediately, India launched a counter attack but only to send the ball wide off the target and complete the full-time in stalemate resulting in a shootout.

In the penalty shootout Rani scored twice while Monica, Lilima Minz and Navjot scored a goal each to ensure India reclaimed the Asia Cup title after 13 years. Savita was adjudged Goalkeeper of the Tournament while Monica won Woman of the Match award.

CHAMPS! Well done @TheHockeyIndia Women's Team! #AsiaCup2017 is ours! What a splendid performance under pressure! pic.twitter.com/sBx8eBugGj

Here are the results after the Final Day at the 9th Women's #AsiaCup2017 on 5th Nov. pic.twitter.com/rtC1qdUBS8