By Chitrangada Dc
Updated: Tuesday, October 15, 2019, 21:13 [IST]
oi-Chitrangada Dc
While Dabang Delhi will take on Bengaluru Bulls in the first semifinal, the Bengal Warriors will face U Mumba in the second semifinal match of the Pro Kabaddi League on Wednesday

Ahmedabad, Oct. 15: With the VIVO Pro Kabaddi League (PKL) Season Seven entering its penultimate phase, the semi-finals, all eyes are on the star athletes who have pushed their teams towards the coveted title. 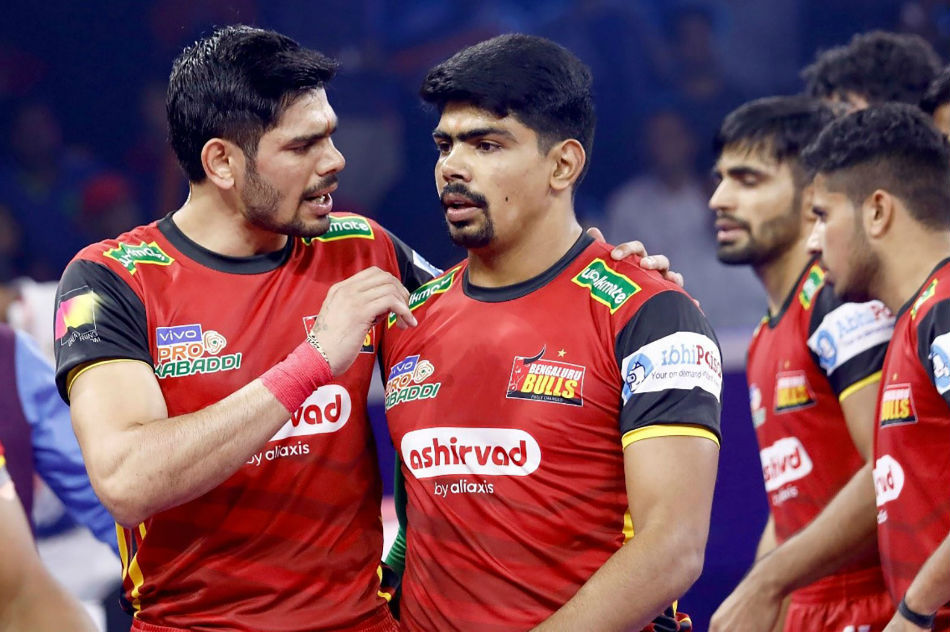 Defending champions Bengaluru Bulls, who have been banking on Pawan Sehrawat's raiding brilliance all season will be up against League toppers Dabang Delhi KC, who have with them another brilliant talent in raider Naveen Kumar.

In the second semi-final, Bengal Warriors will face an in-form U Mumba side, who outclassed a strong Haryana Steelers unit in the Eliminators.

Battle of the raiders

For most parts of this season, Pawan Sehrawat has looked the best Kabaddi player in the country, and he has carried that form into the crucial knockout stages of the competition. His 20-point performance was vital in Bulls' comeback victory against UP Yoddha in the Eliminators and the defending champions will once again be reliant on the High-Flyer for the raid points against Delhi, especially with Rohit Kumar still looking troubled by his back injury. Pawan has 328 points from 23 matches this season, including 17 Super 10s, but the raider will be facing a familiar foe in Delhi's left corner Ravinder Pahal. Interestingly, the ‘Hawk' has a better head-to-head history against Pawan in duels (8-7), and will take belief from Nitesh Kumar's performances for UP against the raider from the same position.

At the other end, Naveen Kumar will be keen to launch the wrecking ball onto a leaky Bulls' defence. Barring Mahender Singh, no defender looked convincing in their game against UP, and in Naveen they will be facing a raider of another class. The 19-year-old, a produce of the Future Kabaddi Heroes (FKH) programme, has 19 consecutive Super 10s this season (268 points from 21 matches), and will be a force to reckon with. With both the raiding departments looking strong, the match will most likely be won by the defence.

Bengal Warriors, arguably, have been the most complete side in Season 7, with their defence and attack firing hand in hand. But they will be facing a U Mumba, often called a defence-reliant team, who have discovered a new dimension through two young raiders - Abhishek Singh and Arjun Deshwal. The duo scored 32 points for the Mumbai side in their Eliminator round, and with U Mumba also peaking at the right time, the second semi-final will be a tactical warfare. Baldev Singh (averaging 2.59 tackles per match) and Rinku Narwal have been in good form for the Warriors and they will be keen to make life difficult for Mumbai's young raiders.

Maninder Singh's injury concerns will be a concern for the Bengal team though, especially with Mumbai corners of Fazel Atrachali (top scoring defender in season seven with 81 points so far) and Sandeep Narwal in red-hot form. But in K Prapanjan and Mohammad Nabibakhsh, the Warriors have a great raiding unit to support Maninder.

The eliminator rounds were testimony to the fact that there can be no clear favourites in a Kabaddi match. Expect nothing short of fireworks as the most fiercely competed season of VIVO PKL enters the final stages.

Player's take on the semi-final match:

Talking about the semi-finals Pawan Hi-Flyer Sehrawat, Captain of Bengaluru Bulls, said "It was a great match yesterday, I have never played such a high quality match. During my school days I played a match which ended in a draw and after that I played a tied game in the knockout stage yesterday and it was a great experience to be part of it. I had lost hope of winning but then our coach motivated me and we had Rohit bhai's support also that kept me going. There were so many exciting moments in the match that in the end turned it turned in our favour. It was a complete team effort.

"Our match with Dabang Delhi K.C. is going to be challenging, they are a good and balanced team with good quality defenders and raiders and like the previous one it is going to be a close call. A blockbuster of a Raid Fest for sure!"

Talking about the semi-finals Fazel Sultan Atrachali, Captain of U Mumba, said, "The last match with Haryana was very difficult as Haryana had played us very recently and they knew our gameplay. They had strategized accordingly to ensure the best result. However, it was a very important time for me because in the last season, we qualified to the playoffs and then couldnt go further so I wanted to not repeat the same mistake. Yesterday's game was really good because we won such a tough match so the team is very motivated and confident.

"We have strategized focusing on defence and when we have a controlled defence we perform really well. Even Bengal Warriors have a good defence but I think we can overcome that. We need to concentrate on team work and not depend on any one player during the match, everyone has to support each other and play as a unit."

Talking about the semi-finals Joginder Narwal, Captain of Dabang Delhi, said "The season has been tough and the competition during the league stage is high. The team worked hard and emerged as table toppers, we wish to continue the momentum and give our best during the semi-finals. We have always taken one game at a time and will do so even for our match against Bengaluru Bulls. Our aim is to pick the cup this year, and we are working towards it."

Talking about the semi-finals Nabibaksh, Bengal Warriors, said "U Mumba put up a good game, they were on point with their defence and offence. We are preparing for the semi-finals and practicing rigorously to make sure we keep the pressure on our opponent from the beginning. The match against U Mumba will be a neck-to-neck battle and we will give our best to make sure we emerge victorious and advance to the finals."