Ahmedabad, October 16: Semi-final 2 at the EKA Arena by TransStadia in Ahmedabad on Wednesday (October 16) will see Bengal Warriors take on U Mumba with a spot in the Pro Kabaddi League 2019 finale on the line.

All the Bengal Warriors players will be well-rested and ready ahead of the clash after a week's break between their last league-stage match and the semi-final. U Mumba, though, will have positive momentum on their side after outdoing Haryana Steelers convincingly in Eliminator 2. 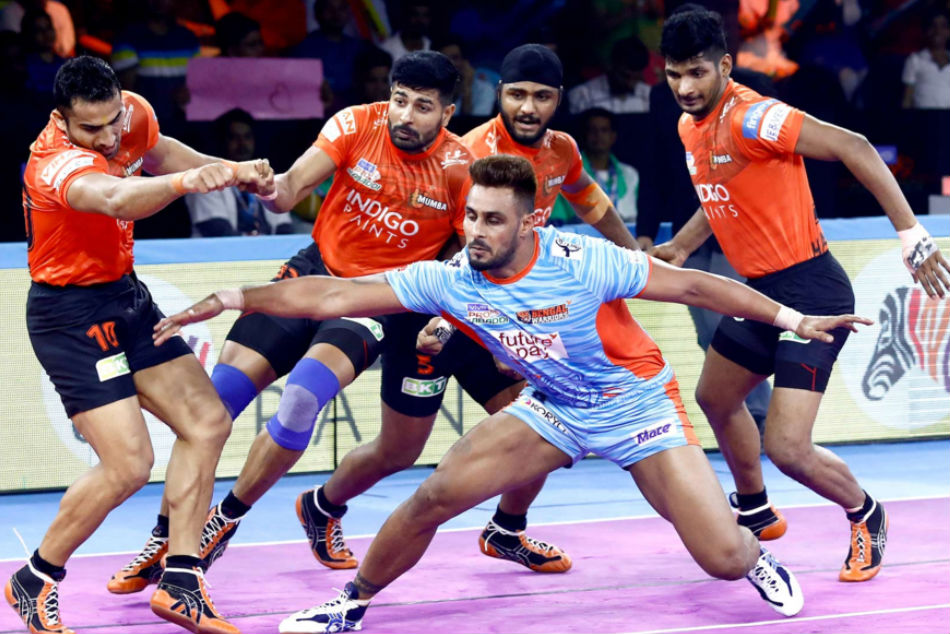 After an indifferent start to the campaign, Bengal Warriors managed an eight-match unbeaten streak which was finally broken in their penultimate league-stage match where they faced defeat against Patna Pirates. They managed to win their next match even in skipper Maninder Singh's absence, but the earlier defeat meant that they had to settle for a second-place finish in the standings.

U Mumba's path to semis

U Mumba's shaky start to the league stages gave way to a strong finish as they came into the playoffs on the back of a four-match unbeaten streak and managed to extend it to five with their win against Haryana Steelers in Eliminator 2. The team put in a convincing performance against Haryana Steelers, conceding just 5 tackle points while picking up 32 raid points to outdo Rakesh Kumar's men in every department.

Maninder Singh has led the Bengal Warriors attack from the front and registered his second straight 200-raid point campaign in the process. He has already recorded his best performance in a match this season with his 19-raid point showing against Jaipur Pink Panthers in Match 103. He also recorded the most Super 10s he has ever recorded in a single season (10) and equalled his record for the most Super Raids in a single season (6) while averaging more than 10 raid points per game. A smart finisher, Maninder has proven vital in finishing close matches in his team's favour.

Maninder has found strong support in K. Prapanjan, Mohammad Nabibakhsh and Sukesh Hegde this season. Thus, Bengal Warriors have three raiders who have more than 75 raid points in the season, making them one of the most potent raiding units in the league.

Baldev Singh is on the verge of reaching 100 overall points in Pro Kabaddi and could well get to the mark in Season 7 itself. His average of 2.59 tackle points is already much better than his 1.33 tackle point average in Season 6. Sitting second in the list of most High 5s in the season with 6, Baldev could prove to be a big threat to U Mumba's raiding unit and will be eager to add to his 62 tackle points in the season.

Rinku Narwal sits just four tackle points shy of Baldev Singh, making Bengal Warriors one of only two teams with 2 defenders in the top 10 best defenders of the season so far. Jeeva Kumar's big match experience, too, could prove important for Bengal Warriors as they chase their maiden Pro Kabaddi title.

U Mumba's leading raider in Season 7, Abhishek Singh, shone in the second Eliminator as well, scoring 16 raid points to add to his 135 raid points before the match, bringing up a 150-point season. He averages 7.55 raid points per match with 9 Super 10s and 3 Super Raids to his name.

Arjun Deshwal was the other bring spark for U Mumba in the Eliminator as the young raider scored 15 raid points to disable the Haryana Steelers defence. He was tackled just twice in the 18 raids he put in through the entire match which makes his performance even more remarkable. U Mumba did not use Athul MS or young Ajinkya Kapre much, but they might get a look-in against Bengal Warriors if the primary two raiders fail to get going.

The current best defender of the season, ‘Sultan' Fazel Atrachali was once again U Mumba's most successful defender against Haryana Steelers as he scored 3 tackle points in 4 tackle attempts with just a single unsuccessful tackle to his name. His 81 tackle points through 76 successful tackles at an average of 3.3 show just how dangerous the ‘Sultan' can be against any opponent.

Surinder Singh and Sandeep Narwal also managed two tackle points each against Haryana Steelers which showed the depth of the U Mumba defence. Another positive for the defensive unit was that every single defender, including Harendra Kumar, who came off the bench, scored at least a single tackle point. This gives the team the flexibility to move the defence around if the need arises in the semi-final.

Bengal Warriors vs U Mumba match starts at 8.30 PM IST on Wednesday (October 16). The game will be shown live on Star Sports 2 and Star Sports 2HD, while HotStar will also live stream the game.