Bengaluru, November 9: As the years roll on India's rising star Aditi Ashok keeps climbing higher and higher up the ladder in the golfing world. At just 19, the young pro has gone down in the pages of history with many firsts to her name.

Not only has the teenage star raised the bar of women's golf in the country, Aditi is making her mark in the world as well with some outstanding performances. Having started off her journey on the Ladies European Tour with a bang, Aditi is still trying to find her footing in the Ladies Professional Golf Association (LPGA), where the teenager is playing in her rookie year.

The young pro who has proved time and again to be the epitome of hardwork and determination, lifted her third LET title last week, and the timing could not have been better. The Olympian has nicely set herself up for another back-to-back title on the LET, having achieved that feat a year back.

Having played a steady round of golf in Abu Dhabi last week Aditi sounded both relieved and happy following her win at the Fatima Bint Mubarak Ladies Open. "Winning in Abu Dhabu was special because I've had a long season and I haven't played as well as I had hoped. Also, it gives me confidence heading into the Indian Open this week."

Aditi, who played a steady round of golf, had a momentary lapse, carding a double bogey on the penultimate hole in the final round. As always, the calm and composed golfer did not let the pressure get to her as she quickly put it behind her to lift the trophy. 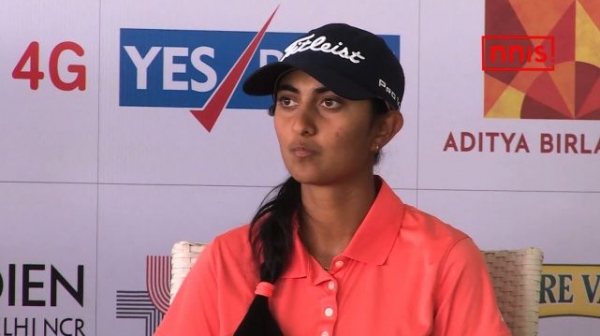 "The double bogey was just a lapse but I still had a one shot lead so I was trying to play the hole the best I could. I'm just happy with the way I played the whole week in Abu Dhabi. My year has been good. It was my rookie season on the LPGA and I wished I could've done better, but I'm looking forward to next year." said Aditi.

Last year, this time, the golfer went down in the pages of history as the first Indian woman to win the Hero Women's Indian Open. And the pro is set for her title defence at the tournament which kicks off at the picturesque DLF Golf and Country Club in Gurgaon from Thursday (November 9).

Though Aditi heads into the tournament as the defending champion, the Bengaluru golfer is treating it just like any other tournament.

"I treat it like any other tournament week and do my preparations the way I would prepare for any other week. I won last week and so obviously my game is in the right place, but I don't want to play with any expectations," stated Aditi.

Congratulations also to @aditigolf on winning the @FBMLadiesOpen. Hope she has my luck at the Indian Open this week. #DefendTheTitle

Moreover the Indian Open which is into its 11th edition has always boasted of a strong field.

This year the tournament will feature former champions and top players including the likes of Emily Kristine Pedersen, Belen Mozo, Beth Allen amongst several others. The top-ranked player for the event will be world no. 21 Carlota Ciganda.

But having played with the top players of the world throughout the past year , defending champion Aditi is looking forward to having some fun on her title defence, as the former champ signed off stating, "The Indian Open always has a strong field so it should be fun!"