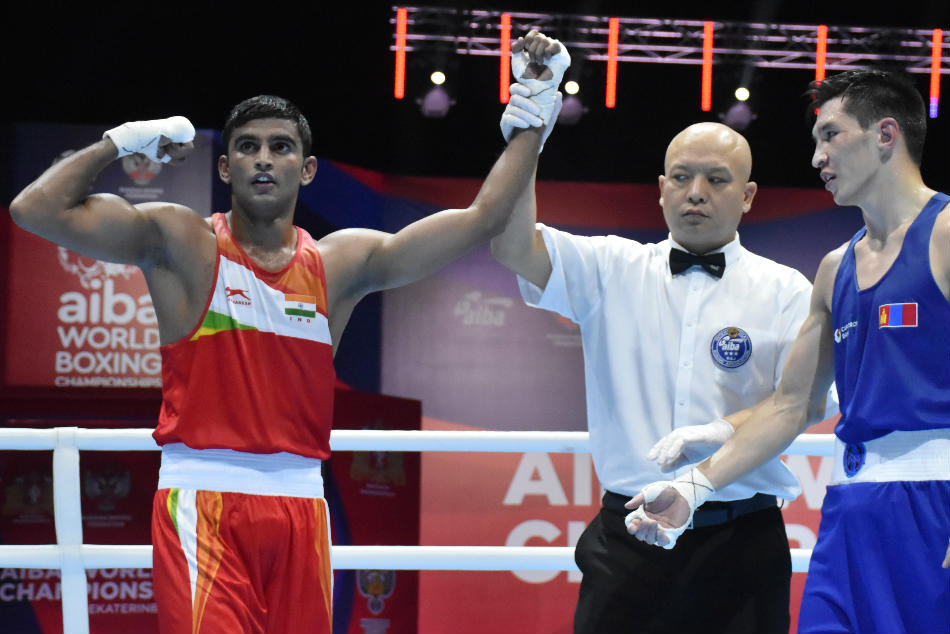 Panghal and Kaushik join Vijender Singh, Vikas Krishan, Shiva Thapa and Gaurav Bidhuri as the only other Indian boxers to have medalled at this prestigious event.

This is the first time more than one Indian boxer will be on the podium at a single edition of the World Championships. In the last edition in 2017, only Gaurav Bidhuri was able to bring home a bantamweight bronze medal.

It, however, could not be a flawless day for India as Sanjeet (91kg) went down fighting in the quarter-finals.

Up against a familiar opponent, Carlo Paalam of Philippines, whom Panghal beat at the Asian Games last year, the Asian champion did not put a foot wrong. Amit evaded Paalam very well in the opening round and landed a few strong punches of his own.

Both boxers then brought forth their aggression as they kept their eyes fixed on the medal. In the final round, Amit went all out showing his pace and attack. Determination was writ large on his face as he sailed to a 4-1 win to confirm India's first medal this year.

Kazakhstan’s Saken Bibossinov now stands between him and a chance at gold.

In 63kg, Manish started off in a cautious manner against Brazil’s Wanderson de Oliveira and was defensive in the first round. It was a much better approach from the Indian in the second round as he showed his fighting spirit and attack. A calm and steady Manish put his all out there in the ring in the final round and was rewarded with his maiden medal from the World Championships.

For a chance to win the gold, Kaushik needs to overcome the reigning world champion Andy Cruz of Cuba.

Sanjeet, however, could not join his compatriots as he fell 1-4 to Ecuador's Julio Castillo Torres 1-4 in 91kg. The 2019 Pan American Games silver medallist and two-time Olympian showed his class and experience to knock Sanjeet out, who resorted to a defensive approach and never looked comfortable.