New Delhi, Feb 13: World silver-medallist Amit Panghal (52kg) has been ranked number one by the IOC's Boxing Task Force ahead of next month's Olympic Qualifiers, making him the first Indian pugilist in over a decade to achieve the global top position in his category.

In 2009, Olympic bronze-medallist Vijender Singh did it for the first time after he opened India's account at the world championships with a bronze in the 75kg division. The 24-year-old Panghal holds the numero uno position with 420 points, according to the list released by the International Olympic Committee's (IOC) Boxing Task Force, which is in charge of administering the sport right now. 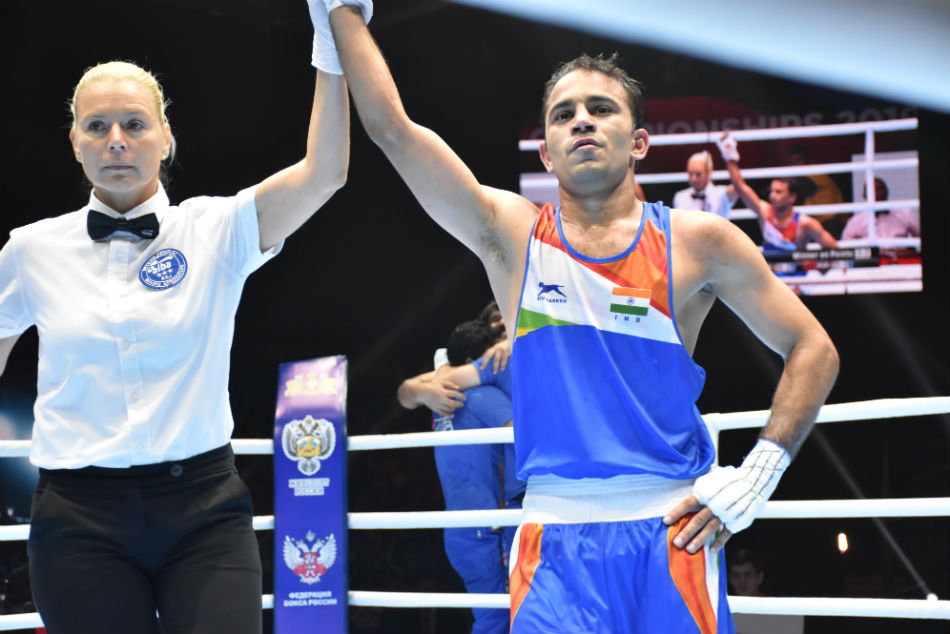 Year Ender 2019: Many highs and few lows for Indian boxing in the year dominated by Amit Panghal

"It is a great feeling and obviously means a lot to me because it will help me in being seeded at the qualifiers. Being world no.1 also gives you a renewed sense of confidence," Panghal told PTI.

"I hope to secure an Olympic spot in the first qualifier itself," added the diminutive boxer from Rohtak.

The IOC task force will be conducting the Olympic qualifiers and the main event later this year in Tokyo as the International Boxing Association (AIBA) is currently suspended for alleged financial and administrative mismanagement. The rankings took into account the last two world championships for both men and women and the continental championships and Games in 2019.

The Asian Olympic Qualifiers will be held in Amman, Jordan next month. Panghal has enjoyed a phenomenal run since 2017, clinching gold medals at the 2018 Commonwealth and Asian Games. Last year, he became the first Indian to claim a silver medal at the world championships after notching up a gold at the Asian meet.

In the women's rankings, celebrated six-time world champion M C Mary Kom occupies the fifth spot in the 51kg category. Mary Kom, who won an unprecedented eighth world medal -- a bronze -- last year, has 225 points. Her rival Nikhat Zareen is ranked 22nd with 75 points. However, the best-placed Indian among women boxers is Lovlina Borgohain, who holds the third position in the 69kg division.

In the men's 63kg division, world bronze-winner Manish Kaushik is the best-placed Indian at 12th, followed by four-time Asian-medallist Shiva Thapa at the 36th position.

Veteran Manoj Kumar, a three-time Commonwealth Games podium-finisher, is 71st in the 69kg category, in which Ashish is the highest-positioned Indian at 22nd. Two-time world and Asian silver-winner Sonia Chahal holds the 10th spot in the women's 57kg category.

The continental Olympic Qualifiers in Dakar (Africa), Amman (Asia), London, (Europe), Buenos Aires (Americana) and the final world qualifiers in Paris will grant more points to ensure that the winners of these events are guaranteed a seeding the Olympic Games.