Jakarta, August 19: Wrestler Bajrang Punia opened the gold medals' tally for India on the opening day of the Asian Games 2018, emerging the champion in the men's freestyle 65 kg at Jakarta on Sunday (August 19).

Bajrang, the favourite in this category, defeated Takatani Daichi of Japan 11-8 to stand on top of the podium and bag his first Asian Games gold. In the first period, Bajrang claimed six points while Daichi remained close with four. However, in the second period of three minutes, Bajrang showed his superiority by edging the Japanese with a final score of 11-8 to the Indian.

The student has become the master! Bajrang Punia emulates his guru to claim gold at the Asian Games. Beats Japan 11-8 in he men’s 65kg category. pic.twitter.com/dh1rw7j6lq 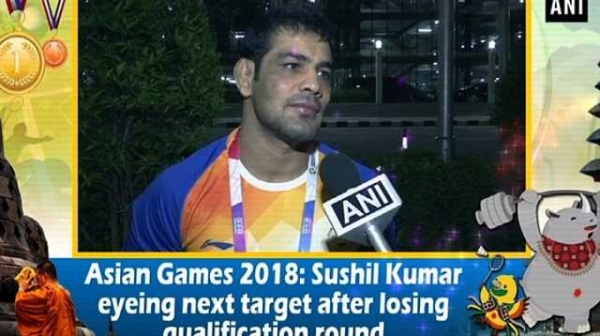 But it was all over Sushil Kumar, who crashed out of the mega sporting event after losing his first bout. There was no bronze for India in 86 kg freestyle either as Pawan Kumar went down to Orgod Uitumen of Mongolia 1-8.

Commonwealth Games gold medallist Bajrang, who got a bye in the first round, won all his earlier three bouts by technical superiority, asserting his class in the 65kg category. He outclassed Uzbekistan's Sirojiddin (13-3), Tajikistan's Fayziev Abdulqosim (12-2) and Mongolia's N Batmagnai Batchuluu (10-0) to storm into the gold medal bout.

Sushil Kumar (74kg) and Sandeep Tomar (57kg) though crashed out. Two-time Olympic medallist Sushil, who was exempted from the Asiad trials, lost 3-5 to Bahrain's Adam Batirov in the 74 kg category. He had come into the Games after losing his first bout in four years.

The Indian led 2-1 after the first period with a take down but the Bahraini made a strong comeback to silence the Indian fans. His defeat came as a shock for the Indian camp. Sushil himself was also surprised wit his defeat.

"I did not expect this. I did not have any big competition under my belt and that was the main reason for my defeat. But it's part of sport. I will train harder and come back," said Sushil. "I was not passive. I tried," he added.

Wrestler @BajrangPunia wins India's first gold medal at the #AsianGames2018. Many congratulations Bajrang, a great final bout, you have made all of #India very proud. #GoForGold pic.twitter.com/mHIvRNEVpX

The London Olympics silver medallist created two opportunities to score in the second period but could not convert them while Batirov did not miss his chances. He led 3-2 with a take down and then pushed the Indian out for a win.

For Sushil to remain in medal contention, Batirov needed to make the final but the Bahraini lost his quarterfinal bout 2-8 to Japan's Yuhi Fujinami, resulting to the ouster of the Indian.

In the 57kg freestyle category, Sandeep Tomar, who was the last wrestler to book a berth for the Games through trials, showed immense promise before crashing out in the quarterfinals.

He won his second round bout 12-8 against Turkmenistan's Rustem Nazarov but was outwitted 9-15 by Iran's Reza Atrinagharchi. The Iranian lost his semifinal and this led to Tomar crashing out of the competitions. Tomar put up a brave fight and was locked 6-6 with his tactically superior Iranian rival. In the second, though, Reza just ran away with the bout with his big-scoring moves.