New Delhi, December 8: Gujarat Giants emerged the biggest challengers to Punjab Panthers with a 4-3 victory over NE Rhinos in the Big Bout Indian Boxing League, approved by the Boxing Federation of India (BFI), in the Indira Gandhi Indoor Stadium complex here late on Saturday (December 7). The triumph was secured with a bout to spare after the NE Rhinos fought till the score was 2-2.

The clash between Amit Pangal-led Gujarat Giants and NE Rhinos, captained by Nikhat Zareen, kept its promise of drawing the fans to the edge of their seats. But after Nikhat Zareen (women's 51kg) first and Mandeep Jangra (69kg) cancelled the lead that Gujarat Giants opened up through Amit Pangal (52kg) and Chirag (57kg), the team from western India marched to victory.

Nikhat Zareen's ploy of winning the toss and blocking the legendary Sarita Devi's 60kg bout against youngster Jony did not bring about the desired results for NE Rhinos. The blocking format has been introduced to bring in a hint of team strategy in an individual sport. 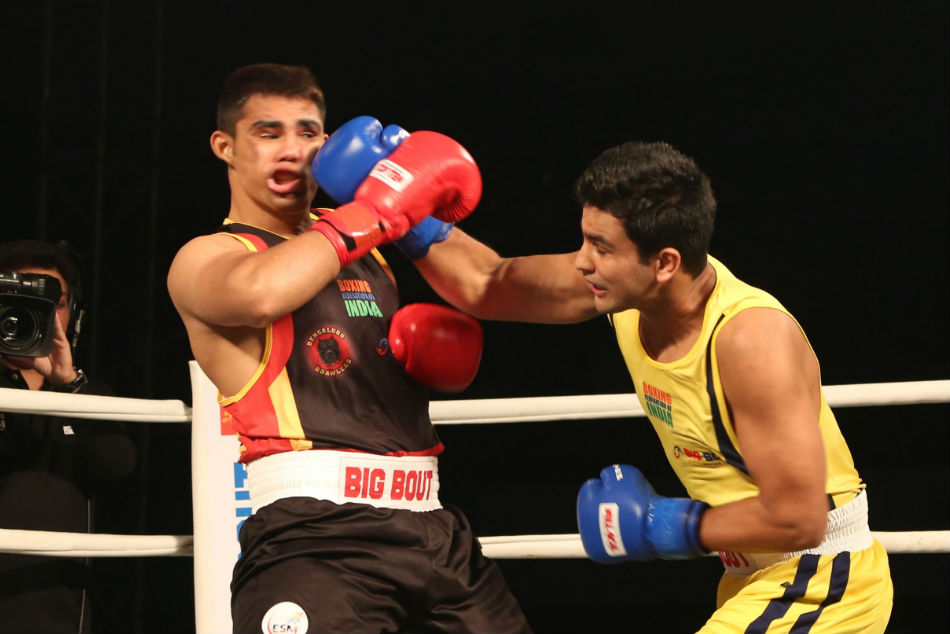 In the bouts featuring the respective skippers, Amit Pangal did enough to defeat Laldin Mawia in the 52kg clash while Nikhat Zareen let Rajesh Narwal trade punches in the opening round before showing her technical and tactical superiority to gain a unanimous verdict. When Chirag, a World Military Games bronze medallist, secured a unanimous verdict over teenager Mohammed Etash Khan, in the key 57kg battle, NE Rhinos knew they would come off second best.

It was a scintillating battle that Mandeep Jangra had to fight against Ashish Kulheria, silver medallist in the Olympic test event recently. The fearless Ashish Kulheria, who replaced Duryodhan Singh Negi in the line-up, gained the upper hand on Mandeep Jangra, exploiting the open guard in the first round but the NE Rhinos star tightened his game and turned the tables.

Asian Youth 54kg silver medallist Poonam defeated the talented Arshi Khanam 4-1 in the Youth Women's 57kg bout before British champion Scott Forrest waded into Uzbekistan's Ergashev Timur, giving him a bloodied nose, in the 91kg clash to seal a win for Gujarat Giants. Argentina's Francisco Daniel Veron reduced the margin with a win over Ashish Kumar in the 75kg bout.

Earlier, reeling from successive defeats in their opening matches, Odisha Warriors scored a welcome and resounding 6-1 victory over Bengaluru Brawlers to stay in the race for a semifinal berth. The massive win lifted them to second place behind Punjab Panthers on the league table with 10 victorious bouts from three matches.

The Big Bout Indian Boxing League is a unique three-week team competition for top Indian and international boxers in which six 14-member squads are competing for Rs. 3 crore prize money. The teams will play one another in seven-match contests before the top four teams compete in the semifinals.