Chandigarh, November 4, 2018: Bengaluru lad Chikkarangappa’s playoff win over local favourite Karandeep Kochhar of Chandigarh provided a fitting finale to the first ever PGTI event to be named after a legendary Indian golfer. 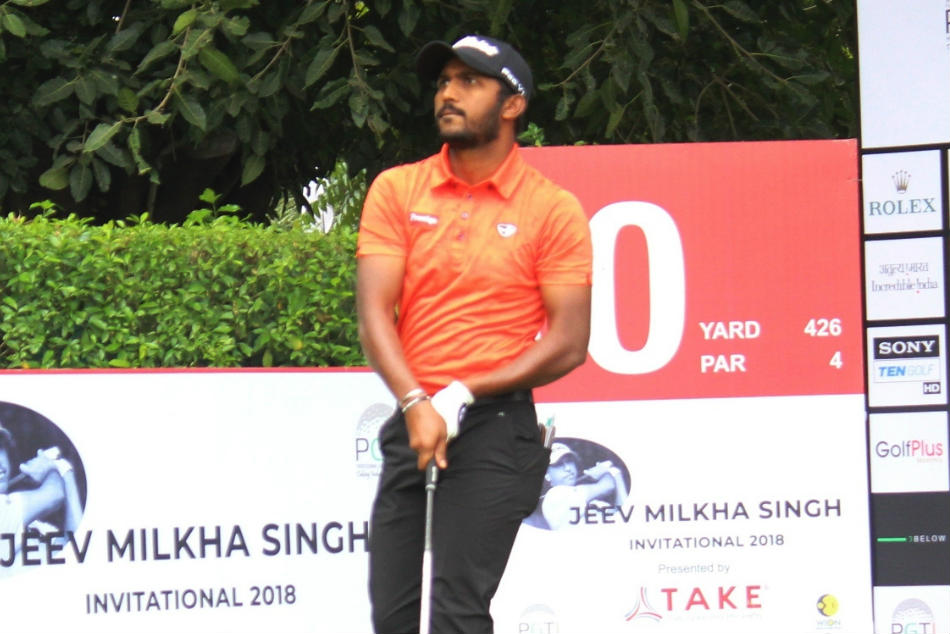 Chikka finally clinched his 11th title with a par on the first playoff hole of the Rs. 1.5 crore event even as Karandeep missed a par putt from two feet to the utter disbelief of the home crowd. Chikka thus ended a two-year title drought.

Congratulations @chikkarangappa on winning the #JeevMilkhaSinghInvitational. Clutch performance just when you needed it. Hope this is the start of a sustained winning run for you. @PGTITOUR @TAKEgolfing @TAKESolutions

Chikka, the overnight leader by two shots, began the day with two birdies to extend his lead to four shots and emerge as the frontrunner. However, there was a twist to follow as Karandeep birdied the fourth, fifth and 10th thanks to some long conversions to launch himself into a two-shot lead even as Chikka hit rough weather with bogeys on the fifth, sixth and seventh as a result of some errant iron shots.

The tide turned in Chikka’s favour once again when Kochhar bogeyed the 12th, 13th and 15th after making two three-putts on the stretch to concede a one-shot lead to Chikka. Both players birdied the 17th but Karandeep got back in the game with an unbelievable birdie conversion from off the green on the 18th to take the match into a playoff.

On the playoff hole, the more experienced Chikka kept his nerve by making par with a regulation two-putt while Kochhar missed par from two feet. Chikka thus kept his enviable playoff record intact by winning his fourth playoff on the PGTI. He is so far undefeated in playoffs. He took home the winner’s cheque worth Rs. 24,24,750 and as a result climbed from 26th to third position on the PGTI Order of Merit.

Chikka, the 2015 PGTI Order of Merit champion, said, “I’ve been counting the days since I last won and today I can say that I won after a gap of 745 days. That is a long time and I’m quite relieved and delighted to have ended that winless streak.

“I’ve been through a rough patch over the last two years as I was winning regularly before that. Things just didn’t go right since 2017 as the changes that I made in my game didn’t seem to click. But I feel my swing is back now and so is my form.

“I started really well today and then I lost my way with a few poor shots from the fifth to the seventh. Karandeep was playing really well at that stage. Thereafter, I tried to find my way back by trying for regulations on all holes. That’s when Karandeep dropped shots thanks to a couple of three-putts that cost him dearly.

“I made an exceptional par on the 16th and followed that up with a brilliant tap-in birdie on the 17th that kept me in the contest. Once we were in the playoff, I just knew that I had the advantage as my playoff record has been fantastic over the years. My confidence was quite high going into the playoff and that reflected in my shots.”

Well done @chikkarangappa he sure loves golf events sponsored by @TAKEgolfing @TakeSri after winning take events on @ADT_golf he now wins on @PGTITOUR at #JeevMilkhaSinghInvitational . Now he needs to win a take event on @asiantourgolf for a full set. Beats @Kkooch62 in playoff pic.twitter.com/iJsAYtFUT2

Nine-time Asian Tour winner Jyoti Randhawa (70) claimed third place at 10-under-278. Randhawa made a charge on the back-nine with four birdies but his challenge faded away when he found a water hazard on the last hole to drop a stroke.

Shiv Kapur came in tied 11th at four-under-284 while Khalin Joshi was a further shot behind in 18th place. SSP Chawrasia was tied 34th at two-over-290.