New Delhi, September 21: Snubbed for the Rajiv Gandhi Khel Ratna award, star wrestler Bajrang Punia met sports minister Rajyavardhan Singh Rathore and said he has been assured that his case will be looked into. 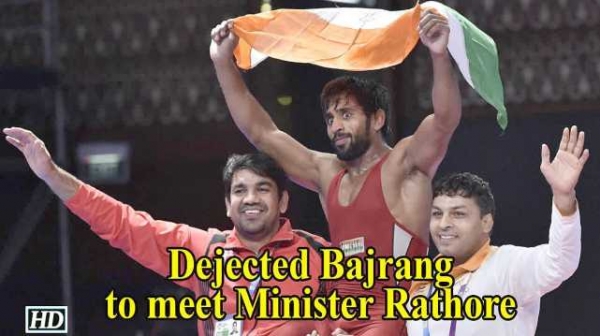 "I was supposed to meet the Minister today but suddenly we got a call last evening for the meeting. I asked the Minister about the reason for not considering me for the Khel Ratna. He said I didn't have enough points which is wrong. I have garnered more points than the two (Virat Kohli and Mirabai Chanu) who were nominated," Bajrang was quoted as saying by PTI news agency.

The 24-year-old wrestler, who won gold medals at the Commonwealth Games and the recent Asian Games in Jakarta, said if he doesn't get a favourable reply soon, he will be forced to knock the doors of Court to get justice.

Bajrang was accompanied by his mentor Olympic medallist Yogeshwar Dutt during the meeting.

The Khel Ratna is in the news again, for the wrong reasons, after wrestler Bajrang Punia threatened to take legal action against the Indian government for ignoring him.

What does it take to win it? Even the govt doesn't seem to know#Explainer: https://t.co/zaMX1RvPTt pic.twitter.com/FKmXcIrN2p

"I have been wronged. I want justice. The minister said he will look into the matter but there is hardly any time left for the award function. If I don't get a favourable reply soon, I will move court tomorrow," he added.

Besides gold medals at Gold Coast and Jakarta, Bajrang had won silver medals in the 2014 editions of the Commonwealth Games and Asian Games.

He also has a 2013 World Championship bronze medal to his credit.

But it did not come into consideration as the points system for giving away the award was introduced only in 2014.

Besides, as per the terms of reference for the selection committee, it "may not mechanically recommend Rajiv Gandhi Khel Ratna to the recipient of the highest marks across disciplines."

"But in a particular sport discipline, the award will be recommended only for the recipient of the highest aggregate marks."

A source in the Sports Ministry however said that the minister is unlikely to make a last minute addition to the list.

"The minister met Bajrang and wanted to know his grievances. He explained to Bajrang why his name wasn't considered. Even though he has promised Bajrang to look into the matter, it's unlikely that any changes will be made," the source said.

In a departure from tradition, the National Sports Awards will be given away on September 25 this year instead of August 29, the birth anniversary of Major Dhyan Chand, because of clash of dates with the Asian Games which ended earlier this month.