New Delhi, October 27: India’s Khalin Joshi pulled off the third round’s best score of eight-under-64 at the Panasonic Open India 2018 to get within striking range of his first Asian Tour title.

Joshi’s exceptional effort at the Delhi Golf Club (DGC) on Saturday (October 27) raised Indian hopes as he joined Bangladesh’s Md Siddikur Rahman (70) at the top of the leaderboard at 13-under-203. 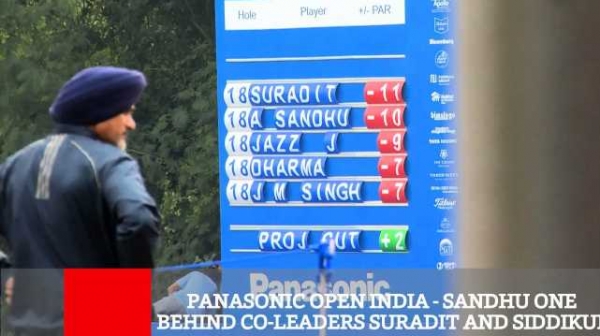 There was a strong Indian presence in the top-5 as Ajeetesh Sandhu continued to be one off the lead in third place after he delivered a 70 in round three. Meanwhile, Aman Raj struck a second successive 68 to occupy fifth place at 10-under-206.

Khalin Joshi (71-68-64), a two-time runner-up on the Asian Tour, has improved on his scores with every round at the DGC this week. Round three was no different as he rose 14 spots from his overnight tied 15th.

As it stands after 54 holes:

Joshi, who has two top-10s on the Asian Tour this season, accumulated six birdies on the first 11 holes on day three to rapidly rise into contention. He dropped his only bogey of the day on the 13th but came roaring back with three more birdies on the last five holes.

Khalin, a three-time winner on the PGTI, said, “I hit it pretty well of the tee and the putting was also good, so overall the game is in good shape. I’m happy with the way I’m playing.

“I think the putt I made on the 11th was 15-17 Feet. Other than that all my putts were within 10 feet. The birdie on the 18th was also one of the better ones. After a poor approach I made a great chip that just lipped out about 2 feet.

“I have always struggled to hit fairways with the driver here at the DGC. But I have worked on my driving. I’m hitting drivers on a few holes this year. At the moment, I’m comfortable with my swing and the way I’m playing.

“I have a fair chance on Sunday and hopefully tomorrow I will be up there throughout the game.”

Siddikur Rahman (67-66-70), the overnight joint leader, began his day with birdies on the first three holes but couldn’t carry forward the momentum as he slipped with bogeys on the fourth and ninth and could manage only one birdie thereafter on the 11th.

Ajeetesh Sandhu (67-67-70) held on to his third position after a steady 70 that featured three birdies and a bogey. Sandhu will now be looking for his second Asian Tour title and first on home soil.

Aman Raj’s three birdies on the last four holes saw him close the day in fifth place. He thus climbed seven positions from his tied 12th in the previous round.

M Dharma continued in tied sixth place for the second day running. Sachin Baisoya also took a share of sixth thanks to his 67 that featured two eagles on the par-5s eighth and 18th. Baisoya gained 15 spots from his overnight tied 21st.

Kshitij Naveed Kaul, making his professional debut this week, gave a good account of himself with a 70 to be an impressive tied 11th at eight-under-208.

Mukesh Kumar and Angad Cheema were tied 14th at six-under-210.

Defending champion Shiv Kapur, former champion Chiragh Kumar, Tapy Ghai, Chikkarangappa and Jyoti Randhawa were all in tied 17th at five-under-211. Jyoti Randhawa sank a hole-in-one on the 12th during his round of 67.

Jeev Milkha Singh slipped from overnight tied sixth to tied 24th after his 75 in round three. His total read four-under-212.