With this win, Gujarat Giants not only consolidated their top-two position on the points table but also leveled their head-to-head record to 1-1 against Chennai Quick Guns.

Das displayed splendid defensive skills in the third turn and scored six bonus points for his stay of 3.42 minutes. His efforts denied Chennai Quick Guns to add too many points as they finished the third turn with just 10 points lead at 42-32 score. 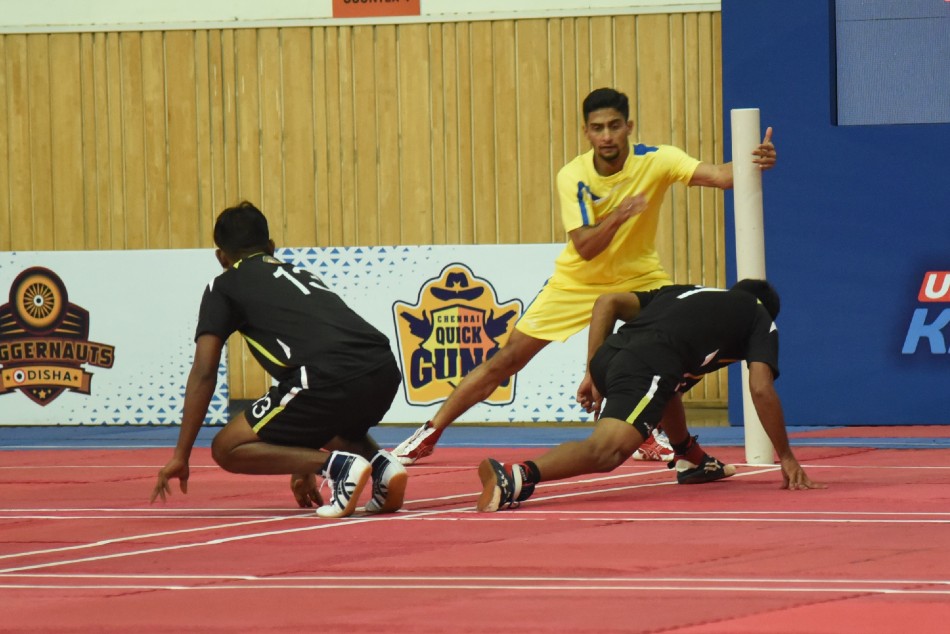 On the other hand, Durvesh Salunke and Avik Singha were among the top performers in Mumbai Khiladis' win with 14 and eight points respectively. Mumbai Khiladis began the game aggressively and took an early 18-point lead in the first turn but Telugu Yoddhas recovered well to level the scores 26-26 at the end of the first innings.

However, Salunke led Mumbai Khiladis' comeback when he dismissed three players, adding seven points as they regained the lead with the score of 50-26.

League's one of the best defensive sides, Mumbai Khiladis once again proved their mettle when the second batch, comprising Abhishek Pathrode, skipper Vijay Hajare and Sreejesh S, spent more than three minutes on the field when it mattered the most.

And then Gajanan Shengal, coming into the next batch, remained unbeaten for the last 2.23 minutes to ensure a convincing win for Mumbai Khiladis with a score of 54-46.

Earlier in the first match, Gujarat Giants' skipper Ranjan Shetty opted to defend as they not only bagged eight points but also restricted opposition to 19 points in the first seven minutes of the match, thanks to Nilesh Jadhav and Abhinandhan Patil, who scored four bonus points each by spending 3.06 minutes and 3.03 minutes respectively on the mat.

Gujarat Giants maintained their lead in the second turn by adding 18 points. They took a 26-23 lead at the mid-innings break despite Chennai Quick Guns skipper Amit Patil defending for 3.12 minutes.

Das displayed splendid defensive skills in the third turn and scored six bonus points for his stay of 3.42 minutes. Due to his efforts, Chennai Quick Guns could finish the third turn with just 10 points lead at 42-32 score.

Once again Das dismissed the opposition defender Mahesh Shinde with an impressive skydive to hand Gujarat Giants a winning lead in the crucial final turn before they completed the win with the score of 50-44.

Chennai Quick Guns will look to bounce back when they face Rajasthan Warriors on Saturday while Odisha Juggernauts will aim for a playoffs berth against Mumbai Khiladis in the second encounter.

Ultimate Kho Kho is promoted by Amit Burman in collaboration with the Kho Kho Federation of India.