Bengaluru, July 22: Noah Lyles did his personal best of 19.31 (world leading) which is the third fastest of all times to lead an American 1-2-3 in the men's 200M on Day 7 of the World Athletics Championships Oregon 2022 while the corresponding honour in the women's section went to Jamaica's Shericka Jackson even as India's Olympic champion Neeraj Chopra kept his date with destiny by entering the javelin throw final.

In the men's 200M dash, Kenneth Bedranek's season best of 19.77 clinched him a silver while Erriyon Knighton rounded off the US podium with a time of 19.80.

At Euegene's Hayward Field on Thursday (July 21) night, Lyles produced a scintillating performance to retain his world 200M crown as US sprinters claimed their second podium clean sweep at Oregon 2022.

Five days after Fred Kerley led a US 1-2-3 in the 100M, Lyles delivered another show-stopping display, scorching to victory with the third fastest time in history.

Only Jamaicans -- the legendary Usain Bolt and Yohan Blake -- have run faster. 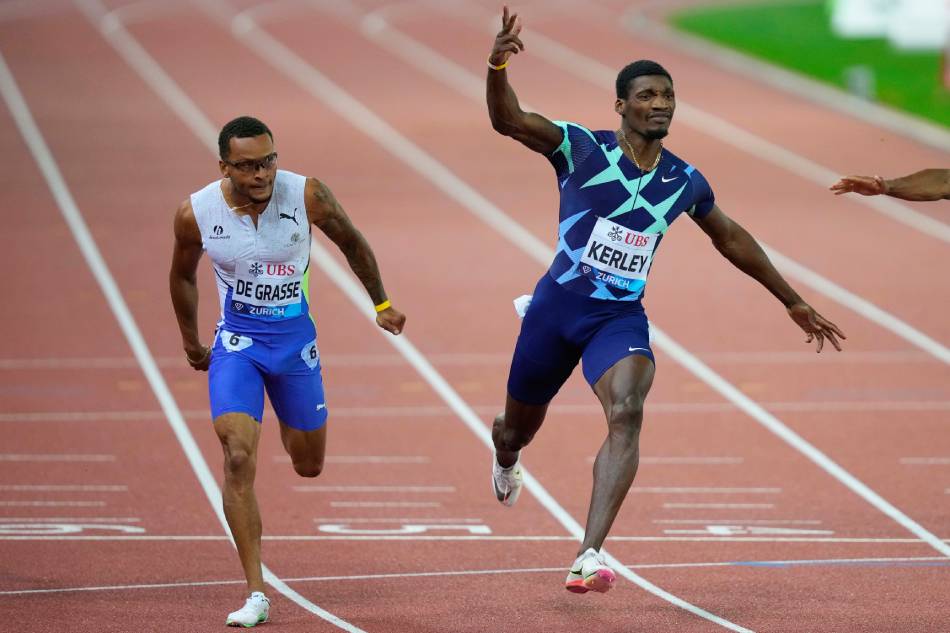 The charismatic American star - who struggled to leave a mark at the Tokyo Olympics last year after being billed as one of the favourites - took gold ahead of Bednarek with teenage Knighton finishing third.

Lyles let out a roar of jubilation after powering over the finish line, before ripping open his vest in delight.

The 25-year-old from Florida had earned his right to the exuberant celebration after a performance that saw him eclipse Michael Johnson's long-standing record of 19.32sec to become the fastest American 200M runner in history.

The outcome had never been in doubt from the moment Lyles erupted smoothly from the blocks, hitting top speed within 50M to open up a comfortable lead coming off the bend.

Earlier, in the women's 200M race, Shericka denied Shelly-Ann Fraser-Pryce a sprint double by winning the race with a Championships Record of 21.45.

Fraser-Pryce, who had won the 100M had to settle for silver with a season's best of 21.81 while Great Britain's defending champion Dina Asher-Smith prevented a Jamaican cleansweep by clinching bronze in 22.02.

Meanwhile, Indian javelin ace Neeraj made it to the finals with a stunning throw of 88.39M. However, the 24-year-old could not top the field as he was pipped by Grenada's Anderson Peters who covered a distance of 89.91M.

The men's javelin throw final will be held on Sunday (July 24) at 7.05 am IST. Just three more days of high-octane action are left at the World Athletics Championships Oregon 2022, which is set to conclude on July 24.