Aragon GP review: The titanic clash between Bagnaia and Marquez

By Sajith B Warrier
Updated: Monday, September 13, 2021, 10:00 [IST]
oi-Sajith B Warrier
A magnificent MotorLand saw a battle of ages between Francesco Bagnaia and Marc Marquez

Bengaluru, September 13: The Aragon GP will be remembered for ages thanks largely to the stunning late battle between Ducati's eventual winner Francesco Bagnaia and runner-up Marc Marquez of the Repsol Honda Team.

A return to the podium with his hardest battle of the year helped Marquez keep his Aragon top-two run alive with his fifth podium in his five most recent races at the MotorLand track.

Morning fog delayed Warm Up on Sunday (September 12) in Aragon, but that would quickly burn away as the hottest day of the weekend settled in

When the MotoGP field rolled onto the grid, the track temperature was already closing in on 50°C and the scene was set for what would turn out to be a titanic clash, the hot conditions matching the action on track. 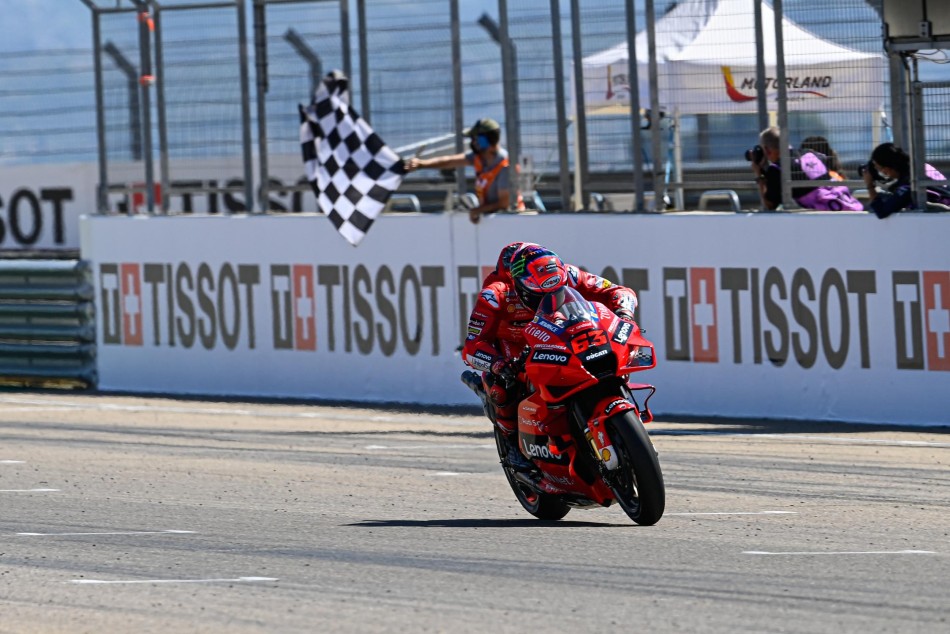 Now the MotoGP caravan heads directly to Misano for Round 14 of the 2021 FIM World Championship.

From the second row of the grid, Marquez shot forward and immediately made his presence known in the podium battle with Bagnaia just ahead. These two would remain locked together for the entirety of the race, matching each other's lap times and eventually opening up a sizable advantage over the battle for third.

Marquez spent much of the race behind the Ducati rider, studying and looking for areas of weakness where he could pass later in the race. As the final five laps began, the No.93 upped his ante and began to increase the pressure on Bagnaia before exploding into a full assault with two laps remaining.

In the final three laps, the lead changed a total of 14 times as Marquez and Bagnaia battled. In true Marquez-style, the six-time MotoGP world champion refused to give up until the very last moment on the final lap. Rolling out of an ambitious move into Turn 12, Marquez ultimately took a well-earned second place and his second podium finish of the season with defending champion Joan Mir of Suzuki completing the podium.

This was Marquez's fifth consecutive podium at the MotorLand Aragon circuit, and his second since returning from injury in 2021. Marquez now has 79 points and is tenth overall in the 2021 FIM MotoGP World Championship standings.

For Bagnaia it has been a dream-come-true. He has been close before, but the Ducati Lenovo Team rider is now finally a MotoGP race winner. It was a true all-time classic at Aragon as the Italian went toe-to-toe with Marquez in a stunner of a duel, finding an answer for every attack as the Spaniard tried, tried and tried again.

Repelling the final assault as Marquez headed through but wide, Bagnaia was able to cross the line with just over half a second in hand to take his first premier class win in impeccable style.

So, a magnificent MotorLand battle saw Bagnaia finally claim that illustrious first MotoGP win. Next up: his home race at Misano. Remember that time he disappeared in the lead and then crashed?

The Italian will be looking for a replay of the first half, and has never seemed less likely to recreate the second. Save the date as MotoGP gets ready to take on the Riviera di Rimini!